It starts. The 2012 lull is done and dusted. The holidays are over and the 2013 gaming season has begun. Now the first of the heavy hitters is off the blocks and wants your money.

DmC (better known to some as Devil May Cry) has been plagued with controversy since the day it was announced. With a new developer comes a new look and style for the illustrious franchise. For Ninja Theory, it’s been a bumpy ride ever since.

Now we’re here with a verdict. Have Capcom made a grave mistake outsourcing this iconic series?

Not in a million years

We begin by gazing upon corporate hell; a towering office block, spiralling up into the stormy skies. Within it, we hear a conversation between a demon-induced Kyle Ryder, a billionaire mogul, conversing with the President of the United States, threatening him over the balance of power. Kyle has been hired by the Demon God, Mundus, who intends to enslave (familiar theme for Ninja Theory) all of humanity and rip the world apart from within Limbo. The only person standing in his way is the Son of Sparda, Dante, whom Mundus intends to eradicate from existence. Right from the beginning, those intentions are crystal clear.

In addition to hordes of abominations, the environment implodes all around Dante, and he is sucked into Limbo by the demonspawn. Limbo is a plain of existence that dwells between Earth and Hell, and is cluttered with humanity’s worst nightmares.

Fortunately, the young demon-slayer receives a helping hand from Kat, a psychic from the real world. While existing in the natural plain, she can also see the goings-on of Limbo and help Dante escape. To survive and beat Mundus, he’ll need all the help he can get.

The Son of Sparda
So let’s make a few things clear about this ‘re-imagining’ of DmC before we continue. Dante is still the son of Sparda. He is still able to execute Devil Triggers, he still has Ebony, Ivory and Rebellion and he’s still an adverse enemy of demons of all shapes and sizes.

Ninja Theory’s interpretation of Dante is very much the same as the Dante before him. Sure, he looks different, sounds different, and acts different, but underneath the exterior, he’s still the same Dante. This is a younger Dante; more brash, raw and wet behind the ears. He’s still far too eager to get himself killed, and thinks with his heart more than his head. It works perfectly, though, as fans will come to understand the more they play. 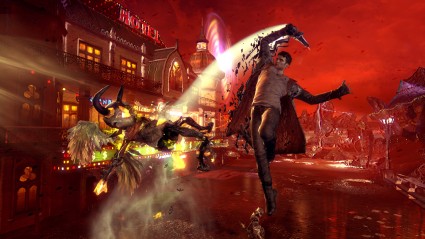 The action is also very similar in style to previous Devil May Cry games, but more refined, focused and creative. Dante isn’t just contending with blood-crazed hounds, maniacal cherubs and demon Gods, Dante is also fighting the environment. Floors will curl up and tear apart in front of him. Fires will rise from the ashes, attempting to cinder him to a crisp. Limbo is an unpleasant hovel that wants him dead, so it is crucial to learn all of Dante’s traits from the off.

In DmC, Dante inherits the powers of his parents, through Angel and Demon weapons. Where the Angel weapons see Dante swipe a scythe or dice his enemies up with shurikens, the Demon weapons empower him with monstrous, hulk-like fists or a heavy, destructive axe. These abilities can be improved through Divine Statues, or in-between missions when Dante earns experience points in battle. These points can be used to upgrade existing abilities, or learn new ones.

Dante also gains upgraded guns, and later on in the game will get to wield a shotgun, as well as a needler-type weapon that has sticky, explosive bullets.

DmC will also give Dante the ability to pull himself toward enemies, as well as drag them toward him. This allows for some crazy airborne style combos when mixed up with the different weapons in his arsenal. These hooks can also be used to swing between platforms, or pull platforms into Dante’s path giving him safe passage.

As you can imagine, diversity in combat is crucial, and will encourage many players experimenting to get their desired SSS ranks. That is one of the key reasons why DmC is so easily replayable. 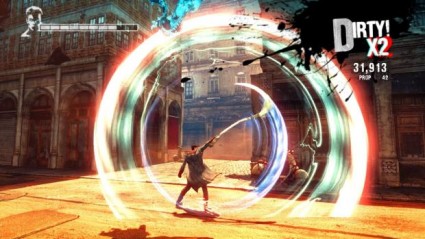 You should take this for a spin

The campaign is medium-sized (twenty levels in length), but it won’t take you long to blaze through to the end. However, there is some real variety in difficulty settings. Players will need to complete the game on “Son of Sparda” before they can attempt some of the more insane settings. For example, Heaven and Hell, sees all entities in the game fixed with just 1 HP (including Dante).

DmC is a refreshing action/adventure experience. In addition to the combat variety, Ninja Theory have made an engaging story, with interesting characters. While it may not be the most memorable story (one we’ll probably be struggling to recall come December) it’s enough to keep you playing the game to the end, and enjoying yourself along the way.

During the bridging between some levels, some of the design does become a little long-winded and tedious. However, I’m not exaggerating when I say that some of the game’s finest moments come in its second half, one level in particular. It’s a very minor complaint, as the tedium doesn’t settle in for long, but I’d be remiss if I didn’t mention it at all.

Blood and thunder
It wouldn’t be DmC without violence, blood and anarchy. Sure enough, that’s here in spades. DmC has a rich, vibrant palette, obvious from the very beginning when seeing Dante battle the elements at a fairground-depicted Limbo. Whether players are gawping at the strobe, flashing lights; aggressive, destructible environments; oodles of demons, or the devilish end-boss that is more than quadruple Dante’s size but as nimble as a cat; its clear to see that a lot of effort has gone into making this look distinctly Ninja Theory, but also respectful of the DmC heritage.

Despite how good the game looks, it does chug along a little bit on the dated 360 system. There’s regular pauses in the action, most noticeably on the menu screen when completing a mission. You’ll also notice it happen during transitions between game action and cut-scenes, and even when action is hot and heavy. It’s clear Ninja Theory and Capcom have bled as much processing power out of this console as they can. Still, the game looks and plays great, and while these are only minor hiccups, they are entirely noticeable. 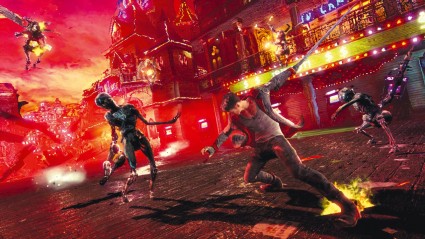 High Energy
Its been a while since I’ve heard a soundtrack as invigorating, brutal and intense as DmCs‘. Noisia have scored the game with Combichrist, creating a powerful arrangement, filled with heavy, skull-crunching, rock, all the way through to wuuuuub wuuuuub, dub-step.

There’s something about the grungy crowing and roaring that gets the blood-pumping when hacking through iron-clad knights, or demonspawn mongrels. DmC has an uncanny way of encouraging replayability, but also instilling a sense of power and energy in its player.

Satan’s got a boo-boo
So here we are. The moment of truth. After all the abuse, after all the insults, the rage and fury, how good is DmC, really?

Ninja Theory have exceeded my expectations. They’ve given the game their own, unique stamp of identity, but also added enough fan-service and quality to DmC that you’ll find yourself being swept along enjoying a fantastic action/adventure title. One of the best this generation, in fact.

Despite a few minor faults, I genuinely have nothing bad to say about DmC. It’s a solid, action/adventure that has gotten 2013’s gaming library off to a phenomenal start. It’s a hard, 18-rated game with brutality and soul, and it kept me entertained from start to finish. Then did it all over again for a second time.

I cannot wait to see what Ninja Theory do with the series next.