Family Guy: Back to the Multiverse

Here we are. A Family Guy game. Excited? In theory, you should be, right?

A long-running series that has a ton of characters and episodes to draw from. A team of writers who have their own brand of comedy that are on board and in charge of the game’s script. A simple art style to emulate. What could possibly go wrong?

The game’s publishers have been pretty keen to boast about the involvement of the show’s writers. With this in mind, the game’s story was penned by said show creators but offers very little to praise.

Stewie’s evil brother, Bertrand, is angry for you stopping him being born, or something. It’s all based off that one episode where Stewie goes into Peter’s body and shoots up a bunch of ‘potential’ brothers, shall we say. He’s now appeared, from an alternate dimension, and plans to kill you using an army of misfits gathered from different universes.

This boils down to you chasing him from universe to universe as you try and stop him. The alternate universes could have been anything. Literally anything. Instead we trot about tried-and-tested, some might say clichéd, areas. Space level, pirate level, college frat party level, etc.

The writing itself is also pretty poor. As a fan of the show, I was disappointed, so I dread to think what non-fans are going to get out of this. So many sound clips were taken straight out of the show and dumped in without worrying about that little thing called ‘context’. This may or may not be a transcript of a meeting that happened during the making of Family Guy: Back to the Multiverse:

Some of the comments the characters make aren’t pleasant and are borderline offensive. Yes, yes. Being offended by a Family Guy game. That’s the point of the show, right? To shock and offend in the name of comedy. The problem is that so many of the one-liners fall flat and just come off as obnoxious. Having an enemy flat-out calling you a ‘queer’ didn’t make me laugh the first time I heard it, so by the 3,000th time I hear it in the level, it’s downright irritating and homophobic. 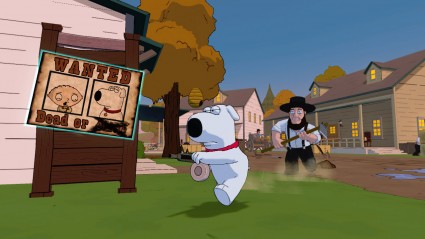 Think the Amish are funny? You won’t after spending too long in this level…

Woe Swanson
With the comedy failing to make me laugh and the story not really making me want to continue, it’s all down to the gameplay. Which is a shame. A really boring, repetitive and unrewarding shame.

Shooting enemies isn’t fun. There’s no recoil or any sense of power to the weapons with the variety of said weapons being pretty limited and not particularly interesting. Flamethrower, sniper, laser gun, pistol. Certain instruments are best suited against some enemies, which provides maybe just a slither of ‘oh, I have to think about what I’m doing’, but none of them are entertaining to use.

The objectives within the levels, aside from surviving infinitely respawning enemies, are beyond mundane. ‘Pull this lever’, ‘punch that button’, ‘unlock that door’ and (my favourite) ‘go to this room’, are all you’ll be tasked with doing. Bosses crop up that require you to do something a little different, but when that little difference boils down to ‘aim for the weak-spot’, you’ll forgive me for not enjoying myself.

Slack of the Multiverse
The graphics are something that I can commend at least, in the ‘this looks like a cartoon’ kind of way. Character models and locales are pretty acurate to the show. I’ve heard complaints that it’s too low-poly, but I think it matches the show’s aesthetic.

The levels are also strewn with ‘in-jokes’ that fans of the show might like, with regular cast members being dotted about just waiting for you to get near them so they can spout their one line of dialogue. Other visual ‘gags’ are knocking about the levels, though don’t strain yourself trying to find them because:

1) The game’s so linear you’ll probably find them without trying.

2) They’re often pretty weak. The example of one being a horse that poops a lot. No, really. 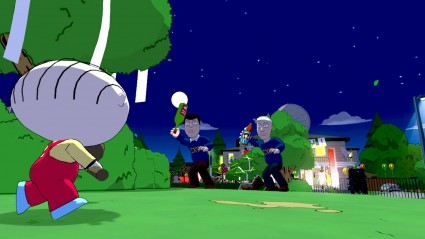 Oh, this is the bit where you have to shoot people. I LOVE that bit!

What a Pewterschmidt
As mentioned, authenticity does seem to be a badge of honour that the game can wear. Regular cast members are back and providing original voice-over work, but it’s the previously mentioned ‘cut straight from the show’ audio that’s just downright jarring.

With some quotes being taken from earlier episodes, there’s an audible difference in quality. I’m no audiophile, so I’m guessing here, but the difference in sound could be recording bitrate, compression or some other magic that people who record voices would know about. For someone who doesn’t normally notice these kinds of things to notice this kind of thing, one can only assume that to the trained ear, it’s a mess.

The music will seem familiar to people that watch the show. It seems that authenticity is another word for copied. It fits in well enough and doesn’t suffer from the problem that the voice overs do, though; so that’s a plus I suppose.

Nothing but a Consuela
With so many potential characters to have in the game, it’s very odd that the main campaign has you play as only Brian and Stewie. I mean, it makes sense to have them as the central characters, as they’re fan favourites and the episodes that focus solely on those two are often the best (in my opinion).

At least multiplayer rectifies this and takes advantage of Family Guy’s huge roster of characters. Right?

Nope. Multiplayer expands from the campaign, but still only allows you to play as a small selection of characters: Mayor West, The Griffins, Quagmire, Cleveland, Quagmire and Death. They all come with their own ‘special moves’ that either cause damage, heal you or incapacitate the enemy in some way.

There. Is. No. Online. Anything. 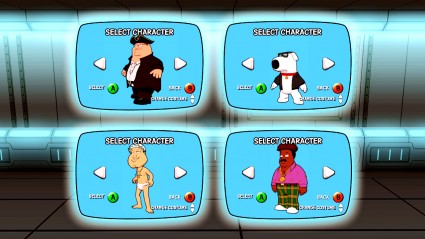 Got four friends that you hate enough to force multiplayer upon them? Then you’re in luck!

Meg on your face
Overall, this game is just unbelievably lazy. There’s clearly a desire to please fans here, with the levels containing enough nods and winks to the show that prove the developers care about the source material.

They just didn’t care enough to produce a game that was fun, interesting or worthwhile. Avoid.