Autumn. The time of year when the clocks go back, the temperature drops, leaves start to fall from the trees and the European football season comes to life. This season threatens to be one of the most open ever in the English Premier League with Management changes at each of last season’s top three, and with changes at the top for Spain’s big two and the European champions, wherever you look there are new eras dawning. Just don’t mention Manchester United.

Autumn also sees the annual release of one of the gaming world’s biggest franchises, FIFA. With the imminent arrival of next-gen consoles, there is perhaps even more scrutiny than ever on a title that has been criticised for doing the bare minimal each year. So how does FIFA 14 fare?

FIFA 14 throws in all the variation a football fan could want in terms of game modes. Outside of the standard Quick matches both online and offline, you can play in some of the worlds most illustrious tournaments, such as the FA Cup or create a custom tournament. All can be played alone or local multiplayer. There is also an updated and improved skills trainer that teaches you the basics of passing, shooting and dribbling in some well thought out and enjoyable mini games. The skill games also pop-up in the loading screens prior to matches to help keep you entertained.

Pro Clubs allows you to team up with up with your buddies and build your very own football club and go online for some Eleven v Eleven action. Here you create your own player then join a club and take to the field. During each game you’ll earn XP for your on-field performances and your pro will develop accordingly.

Seasons allows you to play through a sequence of head-to-head games to progress up through the divisions. The thing I enjoy most about this particular mode is that you are not only matched again someone at a similar level to yourself, but – more importantly – to someone with a similar level team to the one you choose. You wont find yourself penalised for picking a team from one of football’s smaller leagues or face the likes of Barcelona and Manchester United in every single online game. This really adds to the fun.

Ultimate team returns with a slightly updated Transfer centre and a few tweaks to the team building process. Newly introduced Chemistry styles give your player skill boosts in various attributes. You can adjust your players from the default Basic Chemistry to options like Finisher, improves Shooting and Heading stats, or Powerhouse, which builds their Defending and Passing ability. We’ve also had the formation stat stripped, which I have to say is not before time as professional players can and will play various different formations throughout their careers. 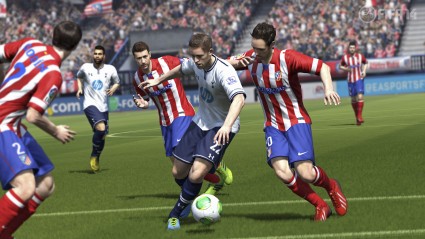 The Ultimate team mode is as addictive as ever as you strive to build the best team and play in online competitions and Seasons. As with last year though, unlike the main Seasons mode you are not matched to a player with a similar level team, so there is no incentive in this mode to play your Bronze or Silver players, which I feel is disappointing.

Finally we have the much improved Career mode that can be played either as a player or manager and improves on last year’s version by adding even more depth. In the player mode, this is more subtle with slight adjustments with the management and the ability to request a loan or permanent move away from the club. The Manager mode has taken another step toward the ever dominant Football Manager series with the inclusion of a global scouting network that allows you to hire scouts and send them out on missions to find you the next big thing at a bargain price. It really is a simple but effective update to a mode that I have often found a little underwhelming.

Pass and move
Out on the field I have some reservations about FIFA 14. The immediate feeling when playing was one of a distinct lack of control on my team, even the world’s best players seem to struggle to control a short flat pass and turning at any kind of pace often leaves the ball behind. I would have no issue with this if it was the case with the lower rated players and happened occasionally with the top stars but, in my experience, the frequency of these moments appear no different between the likes of Gerrard and Lampard as it does with the midfield pair of Dagenham & Redbridge.

It’s also frustratingly difficult to win the ball back on the higher difficulty levels. Again, I would be happy with that of it affected weaker teams more than the better ones but it doesn’t. Whoever you are and whoever you play against there really does appear to be no compensation for the player’s abilities which, for me, totally defeats the object. 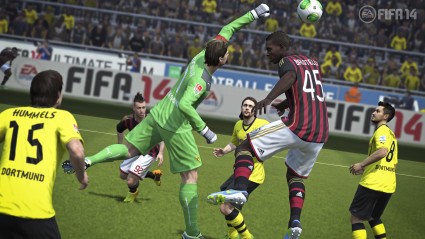 Joe Hart, please take note. This is how you clear your lines

The running ‘off the ball’ of your team mates has long been a bugbear of mine with FIFA and again I have been disappointed by the lack of movement of your A.I. team mates. Far too often your colleagues are just stood still or running into defenders. When you press the button to force the issue, the run is always straight ahead which is often useless. As with the other gameplay factors there is little difference between the players at the top and those at the bottom of the football world.

This is all brought to a head with the fact that CPU teams seem to do everything better. Pass, move, control; shoot you name it. The ability at which these skills are performed is controlled more by the difficulty level you set than the individual player abilities, and a large number of games, especially on higher settings just become a frustrating battle to get the ball back while you struggle to put four consecutive passes together.

There is a positive though. The tactic of booting the ball over the top for a quick forward is less effective than ever before, and the line held between your full backs and central defenders is much more solid. I am pleased to say I have not conceded a single goal this year as a result of the defender furthest from the ball playing everyone onside.

Crowd control
Nobody can question the glorious beauty in which FIFA 14 brings the world of Association Football to life. Stadia are lovingly recreated and the big grounds, such as Wembley and Old Trafford, are easily recognisable. The big players are also very well recreated and, especially when close up, they are again instantly recognisable. 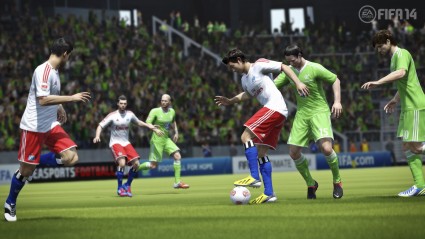 Animations around the pitch are also very good. Better players move with a little more ease and strike the ball cleaner, which is really good to see. The crowd actually get to their feet when you attack and actually wave their arms as if they are enjoying the match. You’ll also see stewards around the ground keeping order, as well as the odd policeman and camera man at pitch side. Nice touch!

Front end menus and presentation are as clear and crisp as ever. The tile system adopted by EA Sports for this version of FIFA is quick and easy to navigate and makes jumping to your preferred game mode almost effortless.

Sing when you’re winning
The menus have the usual mix of popular music on offer, which all are a good blend of upbeat tracks that help to get the blood pumping, and these return at half time and full-time. You’ll also hear the stadium announcer giving the team news and advising of any substitutions.

In matches, the Sky Sports team take over with Jeff Stelling giving you the pre-game stats and build-up before handing over to Alan Smith and Martyn Tyler for the commentary. They are joined by Alan McInally to give us a few score line updates from other games and touchline reporter Geoff Shreeves providing updates on injuries. The package works well in giving that big match experience, but unfortunately there appears to be fewer phrases and conversations than ever before, so the inevitable repetition kicks in very quickly.

4-3-3 or 4-5-1
FIFA 14 is a very good online experience with almost as many options as offline. Ultimate Team is as addictive as ever and has the Seasons or Competition modes to keep you coming back, as well as that uncanny knack of making you want to keep building your team. There is also the Online Seasons alluded to earlier, where you can just pick a team of your choice and get matched against a similar strength team, which I find a much more enjoyable than the general ranked or quick matches. There you will inevitably face the same opponent time and again as a large majority play as the popular favourites of Real Madrid, Barcelona or Manchester United.

Then we have the Pro Clubs mode where you and your friends get together for a full-scale eleven v eleven match. This can be great fun with the right people and also offers something totally different to the usual head-to-head matches.

Throughout all modes is the common theme of polish and stability. Match making is almost always quick and easy, with Bronze Ultimate team tournaments the obvious exception. You do still get the odd person rage-quitting but in my experience in FIFA 14 the community is improving.

Back of the net
There is a lot to like about FIFA 14, which is an excellent representation of the sport. The career mode is more in-depth than ever before and the addition of a transfer market to Ultimate Team again adds that bit of authenticity to a game mode that already was incredibly addictive and a lot of fun.

However, on the pitch FIFA 14 lets itself down. It just don’t feel right when the best players in the world fail to control the simplest of passes, and getting any kind of rhythm or consistency to your passing proves far more difficult than it should be.