Devolver Digital has been championing the indie video game scene as an underdog publisher for many years, and has recently seen a huge success in the Hotline Miami franchise and Broforce, to name a couple. These games have a distinctive lo-fi aesthetic and unquenchable bloodlust. Not a Hero definitely fits under this category and it seems to be an area that has grown in the Steam marketplace, which leaves itself open to accusations of mimicry. The question is, does Not a Hero stand on its own legs as a distinctly ‘Devolver’ game which can bring its own to the table?

The story of Not a Hero revolves around a mayoral candidate, Bunnylord – a purple anthropomorphic rabbit from the future – and his single-policy campaign: to annihilate anything that stands in his goal of world destruction. You play as his ‘campaign manager’ of sorts, dealing with the seedy underbelly of the city on his behalf in order to win over the voters’ approval. The premise is decidedly silly, but it does aid in colouring in a world that would otherwise be abysmally bleak.

Not a Hero was developed by Roll7, whose most notable work so far has been OlliOlli; a sidescrolling skateboarding sim that focuses on scoring gnarly combos in a short space of time for the most points. In which case, Not a Hero can be cast as the anti-OlliOlli. Not a Hero is a sidescrolling cover-shooter that requires little deliberation beyond ‘shoot the man, take cover, knock the man over and shoot him in the face‘. There isn’t a point system in Roll7’s latest outing, but each of the 21 levels have three optional objectives that can be completed in order to attain higher end-of-level ranks, adding a sense of urgency and elaboration to what can start becoming repetitive if played simply as a means to get from point A to point B. These extra tasks will also aid you in winning over an approval percentage, which can unlock new characters. The characters aren’t just re-skins; they also offer different styles of play, so it’s worth the extra effort just to unlock a character with a bit more firepower under their belts. 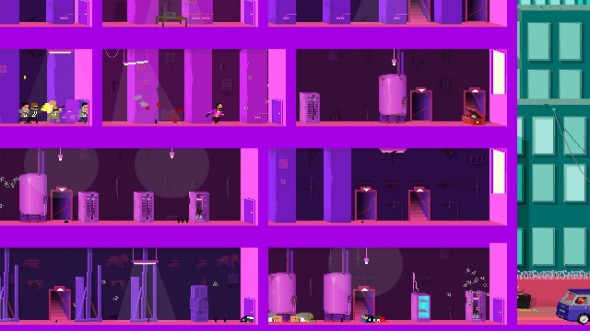 Bullets and dry-cleaning take up the majority of Bunnylord’s campaign expenditure.

It’s recommended to try and beat as many of the challenges as possible for the chance to change up the gameplay alone. Each character does offer something different to the party so you can play through each one as you make solid progress. My favourite was Jesus (pronounced ‘Hey Zeus‘), a hip-thrusting Spaniard who can slide across the floor and shoot his submachine gun at the same time. He’s also decidedly faster, so running away from overwhelming encounters was a lot easier.

One of the highlights of the game is its sense of humour. Between missions, Bunnylord briefs the ‘Fun Club’ on the daily campaign schedule through an odd choice of words and his charming PowerPoints. Sometimes, he might be wearing night-vision goggles or bunny ears (on top of his actual bunny ears) at seemingly random events.

These moments between the gameplay are genuinely funny but don’t offer a lot of depth to the story that is being offered. Sometimes, the objectives Bunnylord lays out are arbitrary and don’t develop on the story. One mission had me retrieve a wind chime because of their high value, as well as being a crucial ingredient in Bunnylord’s favourite milkshakes. Yes it’s absurd, but even though Not a Hero relishes its off-beat style of humour, it doesn’t justify the monotony of the tasks that are doled out. Whether it’s a wind-chime, hanging up campaign posters drawn in crayon or escorting a heavily-armed elderly woman back to her apartment, all the processes feel the same. 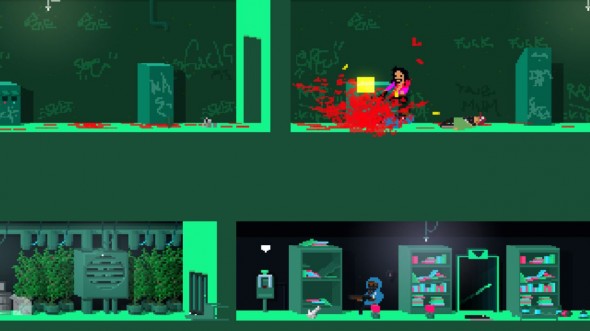 Expect to see a lot of corridors similar to this (including the blood).

That’s my issue with Not a Hero. I really want to invest myself into it, but the gameplay lacks depth beyond the initial premise. Yes, there is room for variation in approaching each mission and there is a sense of satisfaction when you manage to clear out a floor with a well-placed cat-bomb, but after clearing out identical rooms with the same enemy archetypes ten times over, the cat-bomb loses his charm. Survival is reliant on taking cover and the environments don’t make it easy to differentiate what can be used as cover and what is, essentially, set-dressing. It also doesn’t help when the cover button shares the slide button, meaning I was sliding around the floor trying to snap to a piece of cover. It made death feel like a cruel punishment as opposed to a chance to pick yourself up and try again.

Blame what you will – the repetition, monotony, length – but Not a Hero needs a little more to turn it from ‘just okay’ into something great. It does have the makings of a great Devolver game yet it still pales in comparison to the visually similar Hotline Miami; a game where trial, reflex and recklessness are rewarded. Not a Hero does reward reflex but fails to deliver on the other two.