With no prior experience of the series, I have to admit that when Diablo III hit I felt something of an outcast. Despite all the build-up hype, despite all the excited chatter, I was on the outside of the media assault, looking in on a huge event that I didn’t fully understand.

It’s no surprise to hear, then, that I’ve never really played any of the old top-down dungeon crawlers extensively in my lifetime. This has, sadly, led to me miss out on the highlights of an entire sub-genre. That’s not to say I can’t appreciate a good loot-drop, though, so I have been eagerly waiting for a chance to put this right.

I didn’t expect the first step of my dungeon-crawling redemption to begin on the 3DS, courtesy of Heroes of Ruin from n-Space and Square Enix.

A Sphinx says what?
The location is the City of Nexus. The ruler, a Sphinx named Ataraxis, is suffering, dying slowly as the result of a malevolent curse afflicting the land. Your role? As one of four mercenaries, you must step-up, running through any foul beast that stands in your way, as you endeavour to find the root cause of this evil.

That’s as complicated as it ever gets in terms of the general story, but there’s plenty of information about the areas you’ll visit and their histories in cut-scenes between major story missions. Aside from that, there’s some occasional wit to be found in quest logs, which is where you’ll find most of your narrative enjoyment in a title that puts a heavy focus on its multiplayer merits. 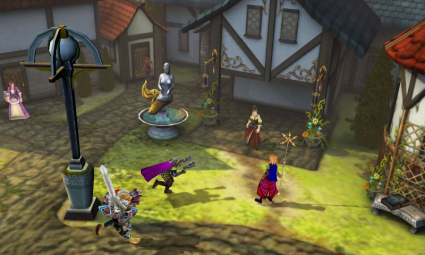 Loot drop n’ roll…
When starting a game, you’ll  create a character from one of four available races. The Vindicator is your typical warrior class, with a penchant for huge swords and kicking arse, acting as probably the most rounded of the group. The Gunslinger is a firearm-wielding badass, great at long-range but terrible when up close and personal. The Alchitect is your mage, prolific from a distance, but not totally terrible up close; while lastly, the Savage is your unarmed mêlée specialist.

Whichever class you choose, the game’s core structure remains the same. The city of Nexus acts as your hub between missions (see what they did there?), and here you’ll be able to trade, buy exciting new loot, sell items and more importantly, pick up the various missions and side-quests before heading out to complete them.

You’ll begin with only two attacks. The first is your standard attack which carries no penalty; however, the other, along with new attacks or power-ups you’ll subsequently unlock, will deplete your stamina, preventing you from abusing your most powerful assaults. To combat this, you can carry twenty stamina potions to replenish with a touch to the right of the d-pad.

Health is managed in practically the same way, only mapped to the left directional button, making it relatively easy to keep on top of your character’s condition. You won’t be short of potions, either, with plentiful amounts found in barrels and crates littered around the levels.

Otherwise, the game is generally an attack spamfest, seeing you constantly moving forward, slaying everything that’s in your way. There are some puzzles in levels (sometimes tied in with side-quests) to help deviate from the repetitive grind, but these are all relatively simple and easy to complete, such as placing a required item on a spot or making sure all levers are active.

While this does make gameplay sound rather boring, there’s a strange allure to combat that satisfies, though it’s probably more to do with the loot that drops during fights. Enemies drop new gear regularly, and just like in any RPG that’s worth its salt, there is great joy in finding equipment superior than what you’ve already got. It’s even better when you can tell that it’s making a difference.

The game features a nifty quick-sale feature to make sure that no loot is useless. If you happen upon gear that’s of no use, be it lower level or a different class, you can sell it instantly from your inventory screen, no matter where you are in the game. Bloody helpful when over encumbered, let me tell you…

In levelling up, you get to improve your character in two ways. Firstly, with each level up you’ll be granted three Valour Points to assign as you see fit across three key attributes, in Might (strength), Vigor (health) and Soul (stamina). You can then choose new perks or upgrade existing perks where possible, and these include new, devastating attacks or passive abilities. It’s basic, not greatly extensive, but it works well and is easy as hell to work out.

Be warned, though; the game is probably shorter than you’re hoping and expecting, clocking in at around 8-10 hours per campaign. With no difficulty settings, the game certainly lacks challenge. The former, however, could be considered a smart move for a portable dungeon crawler, allowing you to have short satisfying bursts and make good progress. I think many will find enough here to keep them playing through the game at least a couple of times before they’ve had their fill. 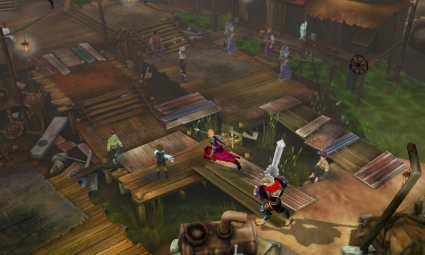 The Vindicator is vindicated!

Muddy mess…
While not completely ugly, Heroes of Ruin really fails to take advantage of the 3DS’ extra juice, at no point even remotely offering visuals comparable with the most attractive games the system has to offer. While character models only just suffice with their limited customisation options, muddy and blurry textures mar every dungeon.

The 3D effect causes its own problems, as while effective, it undoubtedly contributes to some pretty hefty frame-rate issues. Turning that slider down does aid things somewhat, but you’ll still catch the odd stutter here and there, even when there’s not a lot happening on-screen.

Hello, goodbye…
Most of what you’ll learn about the world is as a result of meatier dialogue spoken in the cut-scenes that occur in between missions, and the vocal talent does the job well enough, it must be said.

There’s barely any voice acting to attack your lugholes in gameplay, though, with NPCs seemingly happy to exchange introductory and departing pleasantries only, leaving the bulk of what they have to say to a text box on that bottom screen. Your characters will unfortunately repeat the same one-liners over and over in combat, and after a few hours the repetition starts to hit home. I’d probably rather our heroes be the strong, silent types given the alternative.

I did really enjoy the soundtrack, though. Epic and stirring, reminding me a little of Kingdoms of Amalur, although truth be told it could be fitting of nearly every fantasy RPG ever made.

Four adventurers
Well, well, well… n-Space have provided a solid four-player online experience in what is, probably, the most ambitious online setup on the 3DS thus far. It’s also the best way to play the game, as I suspect n-Space fully know, with online being the default option. The stability here is really surprising, with lag happening only in the rarest occurrence.

To bolster the standard online modes, whether you play with friends or strangers, you can form alliances, link your game to the official website to partake in the daily challenges, compare stats with your peers and get on the Leaderboard. It’s pretty well constructed.

I’d be lying if I said there weren’t a couple of niggles, though, but only one of those could be considered a technical fault. The game features voice chat using the system’s inbuilt microphone, but unfortunately it’s next to unusable due to the sound quality. However, kudos for trying, n-Space.

My only other niggle is more of a problem with the greed of the other players. All too often during combat, players will rush to pick up all the loot for themselves, whether it’s useful or not, and sell immediately via the quick sale feature. The fact that people aren’t considering the other classes that they’re playing with does take the shine off a really well put together online component. 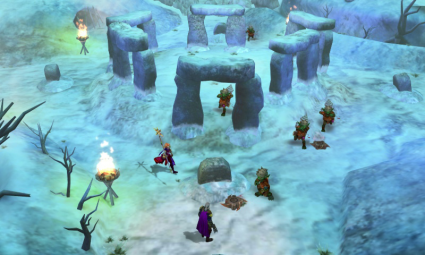 Heroic or ruined?
Heroes of Ruin is a definitely a competent game, one that successfully brings the dungeon crawling formula to the 3DS, and with that I suspect that it has achieved mostly what n-Space had set out to do. The pull of the loot-drop and its rhythmic grind can make it a game that’s genuinely hard to put down, and the online component and its smart implementation is a lovely surprise.

It’s true that it never feels as if the development team strived for true greatness, but honestly? I’m okay with that here; there’s just enough to make it a worthwhile, if overall bland, portable experience.

So, if you’re looking for a dungeon crawler to satiate your needs while out and about, you could do worse than to give this a go.