You should all be aware by now that Hitman is releasing a new level every month. If you didn’t know that – you do now. I’ve had the pleasure of playing the previous two so it made sense for me to have a look at the third one too. This time it sees Agent 47 visit Marrakesh, which is new, and his job is to kill two targets. Which isn’t new.

Strutting through the crowded markets, making your way to the rooftop of the bazaars before finally entering the Swedish consulate, it’s a real journey that Agent 47 goes through, but is it a journey filled with intrigue and suspense or is it a dull trek past a bunch of stalls selling tat on a hot day?This review will focus on the level itself and not the game as a whole. If you want to know how Hitman plays, take a look at the previous two reviews I’ve done (here and here). This will focus solely on Marrakesh as a level. So keep that in mind before you complain that I haven’t mentioned ‘how the game controls’ or whatever. 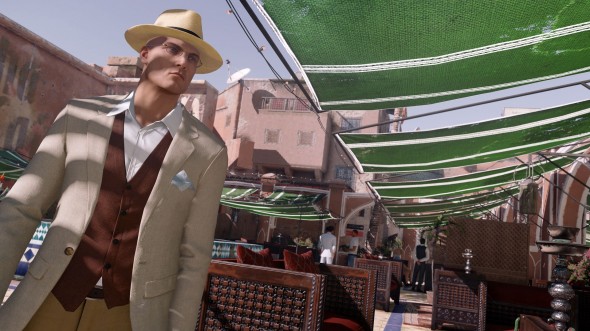 Agent 47 – looking as sharp as the knife he’s carrying.

With that out of the way, the first thing that Marrakesh will strike you with is its scale and its crowds. Previous Hitman levels have had crowded areas but in Marrakesh the crowds seem much more alive. A bustling marketplace and a raucous protest outside of an embassy are a real treat for the eye and provide a nice contrast to the quieter areas you’ll come into contact with, such as an abandoned school and the interior of the embassy which is mid-evacuation.

The different feel to each area is nice, but from a gameplay point of view, they don’t offer much variety to how you play. The issue is that both of your targets are located in quiet areas and the larger more populated areas are nothing more than zones you need to make your way through. How cool would it have been to take someone out in the middle of a crowd or turn a protest violent and eliminate your target in the ensuing chaos? I expect it would have been very cool, but you’ll never know. 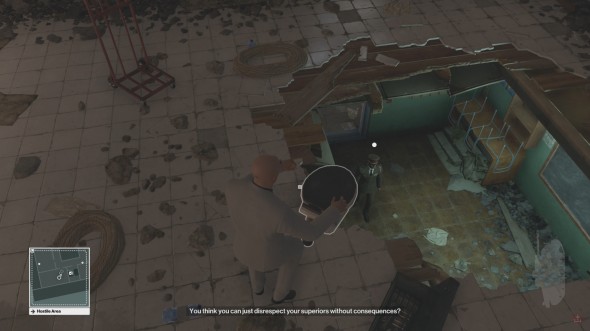 This problem really comes about because both of your targets stay in their respective areas and can’t really be kited around the map at all. Even within their areas, they don’t move around too much, save for one particular and heavily scripted method of assassination. I won’t spoil it, but there’s literally one way that you can get your two targets to be in the same room as each other.

Which is such a shame. There’s an incredible level here but there’s not enough being made of it, however some of the escalations and, potentially, the future ‘elusive targets’ may put it all to good use. Even the feats within the level seem to be at a loss for how to use the Marrakesh setting properly. For example, most feats in the previous two levels have been nothing more that clever challenges set to encourage you to explore interesting ways to complete the mission. This time round, there seems to be more challenges that aren’t related to taking out your targets at all. 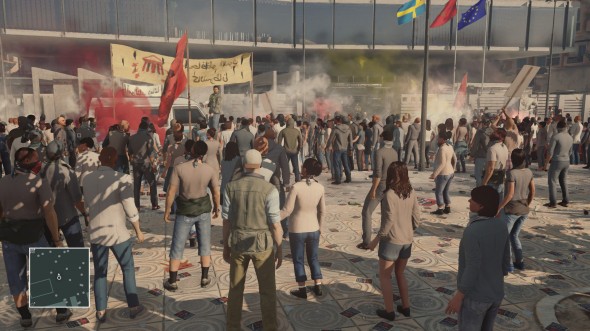 All this hustle and bustle – it kind of goes to waste.

Ultimately, it’s a good level but it doesn’t come close to the quality of the two levels that have come before it. If you’re keen on the game, it’s well worth playing and should definitely keep you busy until the next level arrives. However, as a starting off point to see what the fuss is about it’s not such a great advert. It’s totally worth playing and I really liked this map, but it’s not an outstanding landmark like the previous two have been.