Injustice: Gods Among Us Ultimate Edition

Injustice: Gods Among Us may not have enamoured us with its silly name earlier this year, but it certainly managed to win our hearts with a captivating blend of tight fighting mechanics and the best story that developer NetherRealm Studios has ever produced.

As is customary with fighters, the ‘Ultimate’ re-release – featuring all DLC and some balance tweaks – obviously wouldn’t be far behind. Significantly, though, the superhero brawler makes its debut on two new formats. Now available on PS4 and PS Vita, Injustice: Gods Among Us Ultimate Edition impresses heartily in its transition to both next-gen and the smaller screen.

“I can say without a doubt that there are an infinite number of universes. Some are just like our own… but for one or two significant events, exactly the same.” Lex Luthor

That quote above is the heart of Injustice, set in an alternative DC Universe where Superman has been tricked by The Joker into killing his cherished Lois Lane and unborn son. In a blind rage he murders Joker in cold blood and decides in the aftermath that no more innocents should die needlessly on his Earth.

Though his intentions are pure, his methods are brutal and heavy-handed. With the aid of willing JLA members and those who fear him, he takes over the world and installs himself as a supreme dictator, ruling only with terror and oppression. Batman, predictably, does not approve and heads underground; he has a plan to stop Superman’s totalitarian regime, but requires help from another dimension… 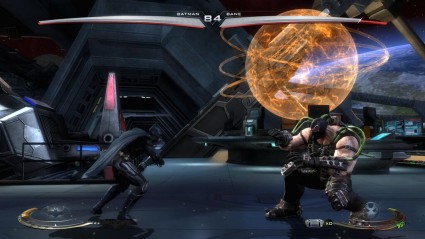 Will Bane break the Batman?

With this, the story mode offers a dark tale in the same manner explored by both of NetherRealm’s prior games, but it delivers more epically and kept me entertained as a comic book fan. The alternative universe angle may be done to death in comics, but with Injustice it allows for some interesting dynamics on your favourite characters, such as a do-goody Lex Luthor or two vastly different interpretations of Harley Quinn, whose demeanour was altered dramatically by Superman’s ruthless actions. Even seeing characters I’ve historically not particularly liked – such as Superman himself, who has always felt a bit pointless with his indestructibility – I enjoyed seeing pushed to breaking point.

Of course, the story mode is simply an entertaining way to allow you to get a feel for most of the roster, and it’s definitely a useful tool in that regard. There are no revisions to the story mode in this Ultimate Edition, though, so the DLC characters don’t feature at all, but the other modes are much better for their inclusion. I can’t help but feel that Scorpion’s presence is a wasted slot, however. DC has a universe rich with interesting characters perfect for Injustice, and there are many others that could have sat here just as well.

Injustice’s physics are practically the same as MK9‘s, but it does feel like a different beast thanks to Low, Medium and High attacks replacing MK’s system of defined punch and kicks. Stringing combos together between the three main attacks is every bit as fun, though; its weighting means that every successful strike lands with a real sense of power. Bones crunch with substantial impact, blood flies across the screen; it’s as gloriously brutal as you’d expect from a game about super-powered beings pummelling the crap out of each other.

Special moves are expertly themed around characters. Superman, for example, makes good use of his heat rays and freezing breath; Green Lantern summons up all kinds of funky weaponry with his magic ring; and Joker can bash brains with his trademark crowbar. It’s a fun assortment of moves and most can be incorporated effortlessly into the flow of combos. Each fighter also has an additional trait that beefs up their offense; Batman can summon bat-shaped drones that circle him and can be fired one-by-one, and Flash can slow down time; these are handy for giving you a quick advantage to assert yourself or get back into a fight. 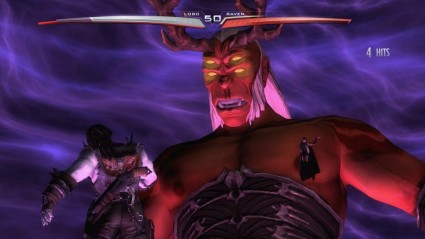 Some of the super moves are ridiculous.

As is customary with fighting games nowadays, you’ll build up a meter at the foot of the screen as you play, and once filled you can unleash unholy hell on your opponent. Injustice’s Super Moves are lengthy, vicious assaults and can turn or win a fight if you can land them. They never change though, and without the flashiness or finesse of execution of, say, Street Fighter IV, they do get a bit tiresome.

The Clash system allows to you spend your meter in a different way. Using it to interrupt a combo, you can choose how much of your bar you’re willing to bet against your opponent’s in a ‘highest bidder wins’ guessing game. The victor will gain health, the loser will drop some. Although it does break flow of combat a little, it’s really cool to see the fighters pull away, say their witty one-liners and then charge with all they’ve got.

Stage interactions add another level of superhero grandeur. Performing actions such as grabbing a drone out of the sky and hurling it, ripping a tree up from its roots and bashing your opponent with it, or disorientating them by breaking a pipe are insanely satisfying to perform. What’s really clever here is that the fighter will interact differently to these elements depending on their size, strength or fighting style. A hulking fighter like Bane or Salomon Grundy might grab a nearby statue to smash into their foe, while powerless heroes like Green Arrow will instead use it as a platform to escape an attack, or slap an explosive on before jumping clear.

Stage transitions also impress, as the right attack in the right position will launch enemies through scenery. What happens during the transition depends entirely on the stage. In Arkham, for example, if you’re on the receiving end you could end up getting a kicking from Batman’s most famous villains before landing in the new area. Alternatively you could be sent flying from the Metropolis streets up to a nearby roof, painfully hitting every wall and beam on the way there. It’s these things that make Injustice feel like a proper comic book fight.

There are two solid offline options to keep you playing once the story mode has ended. ‘Battles’ mode is the meatier of the two and represents the closest thing you’ll get to a proper arcade mode. There are a ton of variations unlock too, so while the Classic Mode offers you individual stories for each character and a standard string of opponents to fight, you can also play with added challenge. Your character could be poisoned so that you’re constantly losing health throughout, or the hardest, labelled ‘Impossible’, requires that you beat the entire roster with only one health bar. These are awesome dynamics and I’ve had a blast with all I’ve played.

S.T.A.R. Labs Missions have you completing a number of quick-fire challenges for each character. Your objective varies wildly; one round you might need to win under specific conditions, avoid being hit, or sometimes be required to tackle an unexpected mini-game. There are 240 of these objectives on offer, and they’re perfect for short bursts of gameplay, which I found a nice fit for the Vita version in particular. 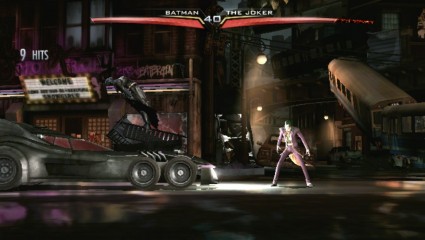 As you can see, downgraded graphics are the only thing to worry about on the Vita version.

You’ll notice at this point that I haven’t made the effort to differentiate much between the PS4 version and the Vita version, and there’s a very good reason for that; they’re practically identical, although the graphical fidelity takes an obvious hit in the port down. The same detail is there, only the texturing is lower grade, but once it’s in motion you’d be hard-pressed to notice. This minor trade-off that means that the Vita version runs at a full 60FPS and loses none of its intense combat systems, stage transitions or single-player modes in the process. On the next-gen side of things, the PS4 does look a sharper and runs better than on PS3/360, but it’s not the graphical overhaul you’ve seen in some of the other launch titles.

The only other differences between next-gen and handheld lay in their online modes. The Vita is restricted to just Ranked & Player matches which, to be fair, is more than serviceable, while the other versions see lobbies and Survivor modes added into the mix. The community seems to be a little quiet at this point, but in the fights I’ve had across both new platforms, the netcode seems up to the task.

Justified?
By making the necessary balance tweaks and including all DLC characters and costumes, Injustice: Gods Among Us Ultimate Edition really is the definitive version of this year’s stand-out fighter. If you’ve not played Injustice at all yet, then this represents the best possible time to jump in, while those that haven’t yet bothered with DLC will also find a revisit fully worth their while. If, however, you have already purchased all content on your current platform, then the jump to next-gen is probably not quite enough in this instance to warrant the further investment.

Regardless of your position, though, it doesn’t change the fact that Injustice is still an exemplary fighter that should continue to delight both fighting game and comic book fans alike.