There are many puzzle video-games already out in the market; it’s a genre that is always growing with new ideas. Although not entirely new, Rising Star Games has provided European players with some interesting match three style video-games in the past. The latest offer comes in the form of Jewel Master: Cradle of Egypt 2. Will this sequel prove fit for the Pharaoh, or is it best to feed it to the hungry scarabs?All hail the Pharaoh

Who could pass up the chance to rule over Egypt? That’s a good question to ask when starting Cradle of Egypt 2. There are occasions where a video-game doesn’t necessarily need a story to motivate the player, and this is the case here, where the plot is pretty much non-existent.

It doesn’t matter, because like Sim City, the real fun comes from witnessing your kingdom grow. It all initially starts out with a green but empty field that is in dire need of being populated. The player begins as a simple peasant that somehow is in charge of building the future Egyptian empire.

Will this mere peasant make it all the way to the top? This is one of the many burning questions that will keep players hooked.

Match three a day to build the Egyptian empire
It’s the strange combination of puzzles and role-playing elements that makes Cradle of Egypt 2 so addictive. On the surface, it looks like just another match three puzzle video-game, but look closer and you’ll find a rather impressive system. It’s not enough to just match as many items as possible, as each item represents a different resource that’s needed to build new buildings. 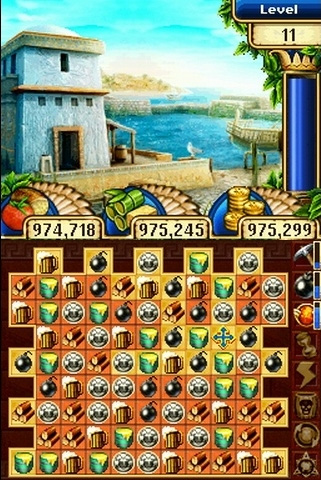 So simple, yet so addictive.

Each building requires a specific amount of resources and it’s up to the player to gather them. This means players will need to employ strategies when playing the puzzle levels. It’s necessary to clear out a certain group of tiles before the timer runs out in order to finish a level, but it’s also wise to try and get as many resources as possible. There’s also a bonus is given for finishing a level with plenty of time.

It’s this quick decision-making that ensures Cradle of Egypt 2 never gets repetitive. There are certainly plenty of levels to get through too, each puzzle having a unique layout and theme. There are new resources being added all the time, and new powers unlocked that the player can use to get through the tougher puzzles. These are certainly useful in later levels when padlocks (tougher to clear) start to appear over resources.

Anyone who managed to get through the main mode can then move on to the other two modes. Tourney mode is basically a time attack mode, where players earn medals by completing puzzles unlocked from the main mode. Those who work hard to complete the main mode can also unlock Blitz mode. There’s certainly no lack of entertainment for those that put the hours into Cradle of Egypt 2.

Completing a puzzle will make a sliding puzzle appear; complete it before a timer runs out and it will make life better for the population. It’s good to see a video-game where such diversions can affect what happens in the main mode.

Look at all these shiny resources that I’ve got
Given the nature of Cradle of Egypt 2, it’s not surprising that the visuals won’t amaze. However, they will not offend anyone either. At least the puzzle sections offer plenty of colour, thanks to the different items that are constantly being introduced.

It’s also nice to see the empty land on the top screen slowly but surely being populated. It’s very satisfying to see a civilisation flourish, and hopefully grow into a mighty Egyptian empire.

Characters are few and so it’s not that hard to distinguish between them, mostly consisting of those who the player recruits for helping build the Egyptian dream. Cradle of Egypt 2 is never going to impress in terms of visuals, but that doesn’t mean that it’s not pleasant. 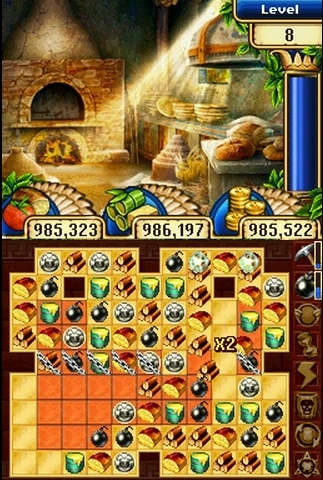 Those Egyptians sure know how to party
There aren’t a lot of music tracks in Cradle of Egypt but there’s enough to make sure that there is one for each section. They will most likely make the player relaxed; quite handy during some of the tougher levels, where it’s hard not to panic.

The music also fits in with the Egyptian theme, and has an inspiring feel to it. It’s nice to see that the development team made an effort with the music. Sometimes it works out for the best if a soundtrack is minimal, and that is just the case for Cradle of Egypt 2.

Work hard and you’ll be a Pharaoh one day
It’s strange to think that a video-game series that probably hasn’t changed much with each new iteration, is still so enjoyable. Perhaps it’s the system put in place to make sure that players feel rewarded; after all, who wouldn’t want to work hard to become the next Pharaoh of Egypt?

The different puzzles on offer here will keep players busy for many hours. Seeing the results of gathering resources with each new building constructed makes it all worth it. Jewel Master: Cradle of Egypt 2 is a thoroughly enjoyable puzzle experience that fans of the genre will not want to miss out on.