It seems we’ve got the look of our spacefolk pegged. Pointy antennas, laser guns, dinky little purple space suits, long, rectangular black eyes. We’ve even built little tin-foil hats in preparation for any of those jedi-mind-tricks we reckon they’ll have.

We’ve totally got them figured out. Well, I thought we did until I played Little Deviants. Now I’m not so sure. Bringing its own vault of crazy to Sony’s newest handheld device, Little Deviants intends to show us how to play Vita the right way, minus the little green men.

At least, so it thinks….

So there they were. The squidgy, round Deviants somehow controlling a rocket ship, floating through space. Life is great for them, they think, as they sit back, appreciating the stars and living a life of carefree luxury. Then, suddenly, an evil army of robots start unmercifully firing on the Deviants, the galaxy filled with their screams and lit up by laser beams. Sirens flaring, smoke billowing, the rocket ship no longer smooth sailing, now instead, nosediving towards the planet of Whoman.

The Deviants awake to find their ship is a wreck. What’s worse, the Botz haven’t given up chase, and they’re not alone either. They’ve enlisted the help of zombies (known, by the Whomen, as Dead’uns) to capture our spherical heroes. Has there ever been a more fearsome combination than Robots and Zombies?

It’s now a race against time for the Deviants to repair their ship, escaping the clutches of their enemy as they go. Better get a move on, then. 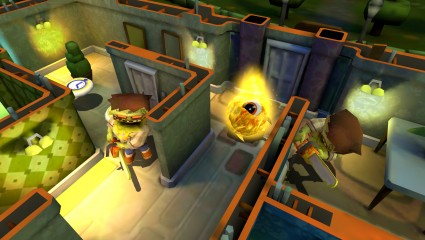 As fun as they are, the mini-games can get pretty old very quickly...

Space… the final frontier
Little Deviants makes use of every available element on Playstation Vita. Apart from the built-in Welcome Park, there is no better game to experiment with everything this handheld has to offer.

Little Deviants has thirty different game types, some decidedly more creative than others, and across these games, players will play as several different Deviant types. You’ll probably already be wildly familiar with Goopher, but there’s also Blobber, who can absorb bombs, Frostal, capable of freezing enemies, Pyruss, who sets things on fire, and Nucleor, who is jittery and unpredictable.

While the mini-games are different, they are each bonded by the collectible tokens available to the player. Each level grades you by Bronze, Silver, and Gold, depending on your overall performance (score and time completed in). Your score can increase by collecting stars, and time increased by collecting miniature clocks. However, you can also claim health tokens if the enemies in the mini-game are aggressive.

In each game, Deviants can also collect small, square-jawed felines, known as a Moggers. Once taken, they can be viewed as a portrait in a house-like museum. The game also allows you to compare scores with your friends, uploading them to online leaderboards, and sharing items via Near.

To the games, then, which vary in style and substance. For example, one game called Shack Shower requires you to use the front and back touch screen. Doors open in a shack, revealing either Botz, Whomen or Deviants. Your objective is to hit the Bot from behind, booting them out of the shack, whether they have their back to you, or looking at you face to face.

Then there’s the Rotten Rumble, which, again, uses both touch screens, and requires you to catapault Goopher at Dead’uns against the ropes in a wrestling ring. Another has you ‘steering’ Vita as you go through a series of forests trying to escape a gigantic whale bot. Then there’s the humming game which requires you to smash wine glasses and bottles with the pitch of your voice.

My favourite in the whole package, however, is an incredibly busy game called Hot Air Hero. The game requires you to hold Vita horizontally as you try to fly a balloon. You control Pyriss, who must stoke the fire of the balloon with the rear touch pad but also use the front touchpad to kill flying midgees who are trying to plug holes in the balloon. Should they put holes in your balloon, you need to patch them up by drawing the shape of a band-aid on the balloon.

However, you only have a limited number of bandages, and if you run out, you’ll be forced to plug the holes with your fingers! What’s more, you’re trying to fly past mines using the tilt functionality of Vita and you’ll need to wipe away frost with the front touch screen as you ascend higher and higher. It’s very frantic, but extremely clever, and makes great use of several Vita functions in one game.

Unfortunately, the early stages of creativity in Little Deviants gradually fizzle out the more levels you unlock. After a while, games begin to repeat themselves, or play very similarly to ones from earlier. It’s as if BigBig had some great ideas to begin with, but were forced to rush the development of the game to coincide with the launch of Vita. 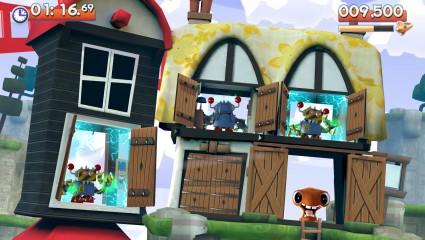 Welcome to the house of fun!

Little Big Deviants
Despite the familiarity of its games, the lands vary greatly, from icy, subterranean caverns, to wrestling rings, cemeteries and countryside villages. Throughout the course of the games, you’ll be facing a wealth of obstacles that aren’t just Botz and Zombies, like underwater mines and London buses. Deviants is crystal clear on Vita’s delightfully flat, wide-screen, brimming with colour, and oozing cute with the buck-toothed Deviants and rigid Whomen.

For a game where substance is defined by mini-games, Deviants benefits from large production values, and high-definition gloss, separating it from similar mish-mash mobile titles. There’s a real franchise quality about Deviants, and I’m sure that this won’t be the last time we see these adorable blobs.

Quirky musical numbers, and nonsensical ramblings abound, the sounds in Deviants blend effortlessly in context of the game. 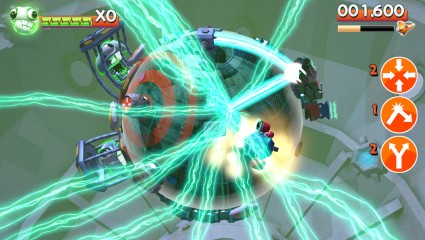 This reminds me of the end boss from the first Half-Life...

All the tricks of the trade
Despite how much of a showcase title Deviants is, it’s hard to believe you’d return to it long after launch. Its creativity slows after an adventuresome beginning, and soon reveals itself shallow as you reach its core. Little Deviants is the perfect companion for Playstation Vita, but considering the game’s price tag and overall longevity, it’s a difficult recommendation to make.

Once you’ve seen all it has to offer, you’ll desire bigger, bolder experiences. Still, as introductions to hardware go, you really couldn’t ask for much better.