To be honest, being condemned to a penal battalion during World War 2 sounds like one of the worst ways to spend the war. Forced onto the enemy guns, armed only with what you can find, it does make for some impressive stories.

Unfortunately playing Men of War: Condemned Heroes, the latest in the real-time tactics series from Best Way, is an experience a little too close to being in a penal battalion: not very much fun at all.

Something involving Russians doing… bad things?
As you might be able to guess from the brief introduction above, Condemned Heroes is all about you taking on the role of various member of a penal battalion. You proceed to fight through a series of missions set during World War 2, fighting the Germans tooth and nail and scavenging equipment you need to use. However, there is next to no character development. It’s hard to even remember the lead’s name and I really didn’t care what happened to the units under your command. For a much smaller scale game than the rest of the Men of War series, I expect to have a little more interest in keeping my squad alive. 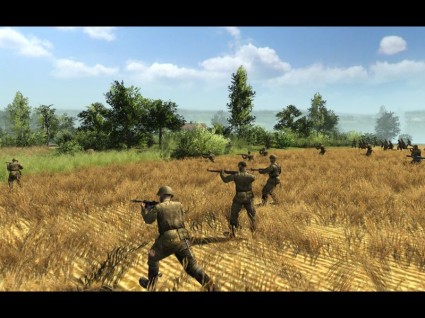 See all of those guys? Expect to control three of them

Not one step back!
This is a hard thing to do thanks to the game’s brutal difficulty. I had real trouble even passing the first mission, thanks to the game not actually telling me which of the swarm of units on the field I actually controlled. Not to mention my team’s AI being unable to fight any more effectively than the rest of the woodland around them. In fact, I’m pretty sure a tree I hit with a grenade caused more damage than the rest of the Russian army.

The fundamentals of the gameplay such as the scavenging for ammo, the realistic damage model for the vehicles and the sheer amount of military kit to play with are still great. However, this is because they are exactly the same as in all the other World War 2 Men of War games. You still have to micromanage your forces in the same way, choosing the correct tool at a time and every so often stopping to repair a damaged tank after you thought it was really cool to drive through a wall.

Vistas of the Volga
The Men of War engine isn’t getting any younger and it is really starting to show. Animations are stilted, infantry models seem very low resolution and the game has problems running even on a high-end machine. As long as you don’t look too closely, it does look acceptable, but the effect is ruined as soon as you notice something.

The interface design, especially the main menus, is exactly the same as the original game with a new skin over it. This gives the feel of just being a re-skinned version of the main game with fewer features.

World War 2 sounds like the ‘80’s, apparently
For a very long time, the sound effects and voice acting of Men of War was a little joke between myself and a couple of friends who also played the game. It was really low quality, like from a B-Movie starring actors with terrible accents. Unfortunately, this hasn’t improved for the latest game and this time it isn’t funny. It’s just annoying.

There also appears to be only two background music tracks. These are really grating, especially when you realise each mission is going to take you around an hour to complete with the music looping again and again. You are not going to be playing this game for the sound. 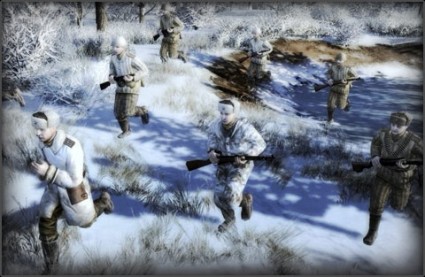 Set in Russia = must include snow

No friends in the Penal Legions
There may be an option for multiplayer on the game’s main menu but it might as well not be there. Co-op would make the game easier but there is basically no one playing the game, and when I did find a match, it failed to connect after multiple goes. The system is broken and due to the lack of interest I can’t see it being fixed any time soon.

A true death sentence
Overall, I really didn’t like Condemned Heroes. In fact, I came very close to hating every single minute of it. It fails to improve the series in any way at all, only providing players with a few more missions that really lack the spark the main game provided.

There also isn’t very much to do. For the same price as this, you can go and grab the far better Men of War: Assault Squad that will keep bringing you back thanks to an excellent set of missions, co-operative and competitive multiplayer that actually work, and access to all the different armies Best Way have created. I can’t even recommend this to veterans of the Men of War series. In fact, even the Vietnam game (lacking multiplayer and being hard as nails) is more enjoyable than this rubbish. Just don’t.