It is fair to say that the current generation of consoles has not been kind to Konami’s flagship football title. Early iterations were plagued with online connection issues that made the game unplayable, and while there were criticisms that standard content was left out, in particular, on the Xbox 360 port.

In addition, over the same period EA Sports FIFA franchise has gone from strength to strength, offering first five, then ten and now a full eleven a-side online experience and added the incredibly addictive and enjoyable Ultimate Team mode.

To that extent, it came as little surprise to me that it was Konami who decided to take the initial plunge onto the increasingly popular OnLive system. Perhaps to find a new fanbase, away from the current console gamers, for their franchise that has been better days more recently.

I’ve been spending some time with it to see just how it measures up.

The OnLive version of the game features all the major game modes of the console version, including the coveted Champions League and the South American equivalent, the Copa Libertadores. These are both fully licensed and allow you to pick any of the teams in the respective competition to play with and lead to glory.

In all honesty as enjoyable as it is to take Manchester United and put right the shambles of this year’s ECL campaign it is still just a precursor to the main game mode, which is the Football Life. This is where you will find Become a Legend and, my favourite, the Master League mode and Master League Online, which is where most fans of the Franchise will want to spend their time.

A game of two halves
At the initial launch of PES you are prompted to create your persona, including an avatar of yourself which you can take through all the game modes, be it as a player in Become a Legend or a manager in the Master League. The editor here and again in the main edit mode is pretty comprehensive allowing me to create a pretty good likeness of myself without too much trouble. In the main edit feature you also have access to Stadia, Clubs, Leagues. If it’s something that’s in the game, you can edit it!

I am not ashamed to say that the Master League mode is where I have spent most of my time and it is every bit as enjoyable as ever. You take control of a default group of players and try to build them into world beaters. The fundamentals are the same as James described in his review of the traditional console version, but there is one major issue I have found.

Despite selecting the Negotiate Directly option along with Club Management to allow myself to take direct control of player transfer and salary negotiations, I was unable to actually change any of the proposed transfer fees or salary proposals to the players I wanted to bring in, which made signings difficult. This was especially difficult at the start when my reputation and club stature was poor. Although this doesn’t have a particularly negative effect on the game itself, it is hugely frustrating and means building that team of world beaters takes longer than perhaps it ought to.

I also have found the interactions with your coach in-between games incredibly repetitive as he tells you of squad growth, even if there is none, and goes over a fairly rudimentary gameplan of your pending opposition or outlines all the signings you failed to make because you can’t actually change anything in the negotiations. 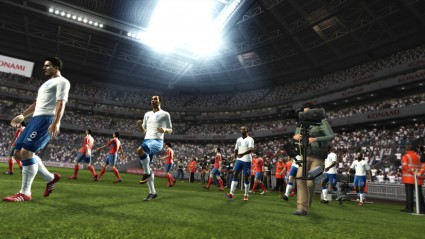 On the pitch, PES plays very well, with the familiar controls boosted by this year’s new addition of teammate control on both sides of the ball. Defensively you have far more control of your team as a whole and the team-mate press works better than ever before, allowing you to hold up play and bring a pal in to nick the ball off your opponent. This is not to say it’s easy to get possession back, though, as your opponents are wise and move the ball well thanks to the much improved A.I. over previous versions. Offensively there is the ability to totally control a second player, which is difficult to get to grips with initially but is a huge advantage if you persevere and master the technique.

In terms of the in-game tactical options, I can’t help but feel the Onlive version of PES 2012 has been stripped back a bit. I will be honest and admit I have not played the full version of either the PS3 or Xbox 360 versions to compare, but compared to last year’s game there is definitely less freedom in this version.

Entering into the gameplan screen does allow you to set four preset tactics and these can be manipulated to offer different formations and some very in-depth tactical changes, including how and where you focus your attentions with and without the ball. However, there are only three buttons that can be used for quick tactics such as Swap Wings or Offside trap, and the number of options to choose from is limited to just three as well, where in previous versions there have been more than double that.

The other area of total frustration comes from the ability, or lack thereof to change your attack and defence levels. I have tried, in vain, to do this with all manner of controller configurations. Having checked the command list a billion times and practically broken the buttons on my control pad by pressing so hard my fingers go white just to make sure I’m doing what it tells me, I can only conclude the option has been left out for some unknown reason.

Pitch-er perfect
PES 2012 has some very good visuals. Player animations are as good as the series has seen on any system in the past and compare well to the big rival from EA Sports. One big question with OnLive is always going to be how more advanced graphical games cope on big TVs with UK Broadband speeds, but I have had absolutely no issues here. 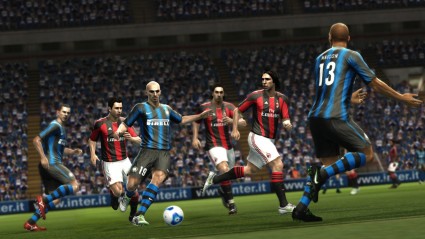 With a 42” TV and Sky’s Large internet package, the game looks every bit as good as both big footie titles on my Xbox, and I have not had any drops in frame-rate whilst playing either. One thing I love about the series is how the crowd is visible and interacts with your game, especially in Master League. As you start out with a pretty poor team scratching for wins there are always plenty of empty seats but progress, get some big stars in and perform well in the league and those seats are filled with more excitable spectators wanting to watch your team play.

Fever pitch
The menu music and commentary is a direct port of the console versions and as such is generally fairly good. There aren’t as many menu tracks as there are in FIFA and they certainly aren’t all to my taste but there is a decent mix and you can remove any you’re not fond of.

In-game commentary is courtesy of the ITV pair of Jon Champion and Jim Beglin and is pretty good overall, though certainly wont be to everyone’s taste. There are enough phrases to keep things fairly varied and the commentary follows the on-screen action as well as any other sports title, but it’s not really anything to write home about. Crowd chants are slightly better with some decent variation that differs with club and region.

It’s a team game
All the online game modes are here in PES 2012 OnLive, including the Master League Online. The problem is, ironically, given OnLive is a system that requires you to be on the internet to play even single player games, there is just nobody in the multiplayer modes. Of the numerous occasions I have tried to find a simple quick match, (ranked or unranked) as well as looking at the Online competitions and the MLO, I have managed a single occasion where a single other person has been online for a ranked game or two. In the MLO and online competitions, there has been literally nobody in the lobbies.

Sports titles can often live and die by the multiplayer with poor online modes often being the death knell. This is something the PES franchise knows only too well and it is a massive shame that in my review time with the game, the community has been non-existent, I can only hope this picks up as the OnLive format becomes more popular over time. 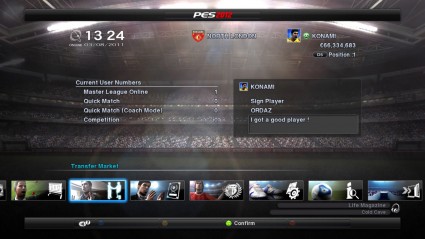 How many people online?

Goooooooooooooooallllll!!
This is without question a very good port of a decent football game that plays very well. PES 2012 has the look and feel of a real title contender but like Arsenal it fades away when it matters most. The apparent stripped-back tactical options and inability to make a simple change in match that has been a fundamental part of the series going back to the SNES is, quite frankly, inexcusable and the fact that you can’t change any of the values when negotiating for players is incredibly frustrating and again, it seems ridiculous that the game wont let you do something so basic.

The other major sticking point is the lack of an online community to compete with, which is not Konami’s fault by any means but is a slight problem with a sports title that looks to bring out your competitive edge.

On the plus side, the single player modes are very good and there is plenty here to keep the football fan in you happy. Between the Champions League, the Master League and the Become a Legend mode, there is some diversity to compensate for the lack of online matches. There is also a lack of competition in the OnLive store at this moment in time, which certainly helps you to overlook the little gripes I’ve mentioned above. However, because of these, I cannot fully recommend this as a purchase but it is definitely worth a go.