Rugby is a game that, historically, has not had the best of times in video game format (my favourite is still the official Rugby World Cup game of 1995). You could argue it’s unsurprising, given that it is a game that divides opinions unlike any other. Many fans of other sports will be predictably derogatory of the “egg chasing”, but even for fans there’s the division of codes to contend with. So with a number of mediocre rugby sims having tried and failed, Cyanide Game Studios have decided to give Rugby Union the Football Manager treatment for the first time in a decade.

It’s a brave step from a developer that has some good experience of the sports management genre through their annual Pro Cycling Manager series, and despite a few minor irritations there’s plenty to sink your teeth into if you’re a fan of the sport.Just to clarify, from the outset Pro Rugby Manager focuses solely on the Union code and gives you access to any club side from the Northern Hemisphere Leagues of France and Great Britain. This includes the second tier in both England and France, allowing me to take the hot seat at my local team, the Bedford Blues. Pro Rugby Manager also offers you the chance to play a friendly match outside of the main career mode to get to grips with some of the in-game decision making and check out the teams available.

These decisions kick in at set-play situations such as lineouts and scrums and, in moments where you have the possession, you get two choices. The first of these is a choice of attacking position, so for a scrum that’s right, left or centre push. For lineouts it’s first, second or third jumper. The second phase is your “attacking gambit” and this is where you get to decide how you want your team to work off the back of that set-play. In order to make things easier, you have a selection of small diagrams that show how each of your backs will run and the way the ball will be moved. This is an incredibly easy system to follow and offers a good variety of options to spearhead your attack. The attacking gambit part is removed when you don’t have the possession.

The other in-game decision comes from how you use your penalties and constitutes of a kick for touch, kick for goal, scrum or tap kick. It’s the combination of these two sets of decisions that give you the feeling that you are actually influencing the match, something you don’t always feel with other games in the genre.

Naturally, for a management sim, what happens on the pitch is only a very small part of the overall experience and despite not having the sort of depth of the likes of Football Manager, there is plenty on offer here. I found the opening presentation and set-up of the Career mode slightly unfriendly thanks to the section to set your name being hidden away at the bottom left of the screen, and no on-screen tips until after I had selected a team and started my career. In fairness, when the tutorial does kick in, it comprehensively takes you through the screen layout and basic functions. There is also a help icon available on every page within the club management to give you added detail and pointers at the click of a button. 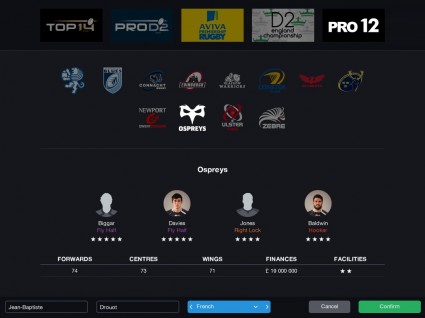 Jean-Baptiste Drouot is a commonly used name in PRM15

Club management is performed through a series of menus and there is certainly a familiar feel to the set-up and interaction, which clearly lean on the tried and trusted formula of the aforementioned Football Manager series.

The top bar is the focal point, with a series of icons to take you into your news feed, squad details, financial management, search and, finally, selection. This makes up the left hand pane with the right-hand side displaying your balance, date, and the option to forward time by either a single day or to your next action. There are a number of secondary choices but rather than drop down menus, you need to navigate through all screens in turn, which felt a little cumbersome. I also felt there was an unnatural logic to the placement of certain sections. For example, to access the League table you go via Finances and then Competitions, while the Players section is where you’ll also find things like your calendar and staff recruitment.

Talking of your players, you have your seniors, under 19s and under 17s, and can recruit at any of these levels. In order to find the right players, you can either send your scouts on assignment or search the database of players. Both work well enough, with players being rated in a number of areas from 1-100, but I have found it difficult to judge potential as there don’t appear to be any U19s with any rating above 60 and U17s rarely above 40. You also have to open the individual player screen to be able to perform any action; there are no right-click shortcuts at all.

Once in the player screen, contract negotiation is simple enough with you setting a wage, contract length and offering a bonus if you wish to add that little extra incentive to tempt the player. These bonuses range from an apartment for the senior pro, to a holiday for a youngster, and depending on the cost of the bonus you will get a positive boost to your chances of signing your target. At no point is there any negotiation on transfer fee, with the decision lying solely with the player. Should they opt to join you while under contract, you pay the default value of the player as the transfer fee. This certainly simplifies the recruitment but without knowing how transfers work in real world rugby, I can’t help feeling a little robbed here. 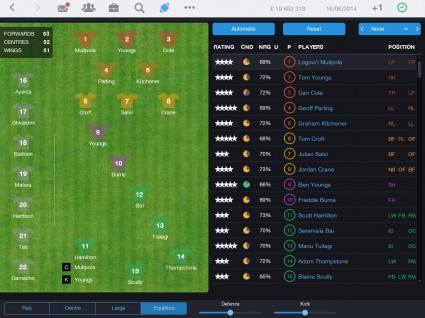 The rugby version of the tactics whiteboard.

As the games come around you are taken into your selection screen and get an option to auto-select or fill each position in turn. This is a simple case of dragging the chosen player from a list on the right to the relevant position on the pitch on the left. In the far top left is a group of numbers for Forwards, Centre and Wings and this represents your team’s level in each of these areas and gives you an indication of where your strength is. Tactically, you set a slide for your defensive level and your kicking, and then start your game.

You’re able to view matches in either a 2D or 3D engine, or you can sim the game entirely. Your choice affects how the game plays massively. If you choose either the 2D or 3D match, you view the whole game and get to make all the set-play decisions. The overall tactics are managed by sliders for kicking and defence, plus a box to select your focus on Forwards, Centre, Wing or balanced. If, however, you sim the game, you get an additional pre-game screen to set an overall tactic. The tactics are relatively basic in terms of choice, as you pick from kicking, forward play or passing style, and then one of two options in the area you choose. As an example, if you want to focus your play around your forwards, you pick from playing from the base of the scrum or controlling mauls, then you’re done.

At no point during your pre-game set-up can you easily and quickly see any details on your opponent. You don’t even get a presentation screen telling you the name of your opponents until after picking the side, unless you go back into the players’ screen and then look at your calendar. Again, though, there is no way to see their details or strengths.

My other in-game niggle is that when you want to make a substitution, you can’t open a player’s screen to view the positions they are suited to, nor does it display on screen, leaving you to either remember what positions every player can play or guess. The guess is aided by a colour coding, but wings and full back are the same colour as centres and they are not always interchangeable. Obviously without a right-click menu, there really is no way of knowing who can play where until you’ve learnt the players in your squad.

It’s these small details that really let Pro Rugby Manager down and hold it back from being a really enjoyable title. 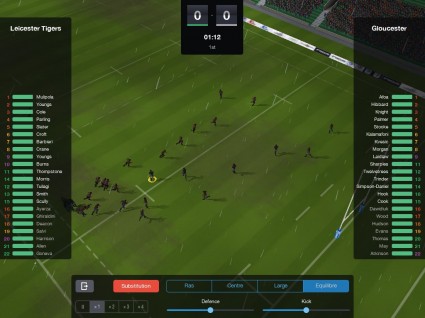 Get ready for the bundle

Pro Rugby Manager is not a game that’s going to hook you on sound and vision, but the 3D match engine looks good enough, with the pitch visibly worsening in bad weather and player animation being reasonably fluent. The sound in-match is decent, with impact noises from players in tackles and scrum situations, and there’s a bit of a techno feel to the background music throughout the menus.

Would you be better off chasing eggs?

It’s about time we had a solid sports management sim hit the shelves that’s not based on football, and Pro Rugby Manager just about offers that. There’s a good balance too, with plenty here for the rugby enthusiast while never going too deep to put off the casual fan. It’s the little things that ultimately make the big difference and, as such, the often long-winded navigation, coupled with the unintuitive match day process, are things that cannot be ignored.