I’ll happily go on record to say that 2011’s Rayman Origins is one of the best platformers I’ve ever played. As a fantastic re-imagining of a dormant series, the game played a large part in reigniting my love for an entire genre; a love that had been dwindling since my youth.

Following something of a strange development cycle, where the game was a Wii U exclusive and then suddenly wasn’t a Wii U exclusive, and then was delayed until September for no reason despite being finished, the follow up, Rayman Legends, is finally in our hands on all platforms.

Is it another hit for Michael Ancel and the Ubisoft Montpellier team?

Sleeping on the job again…

Rayman and the gang have been sleeping yet again, this time for well over a century. In that time their enemies, including the Magician (the tearaway teensie antagonist from Origins), have redoubled their efforts and grown their armies, and it seems that a whole bunch of princesses and Teensies have gone missing in the process. Awoken by Murfy (a green bottle fly apparently from Rayman 2), the gang jumps into action and try to restore world order once more.

It’s all silly but fun nonsense, of course, a basic premise that kick-starts another platforming classic from Ubisoft Montpellier. 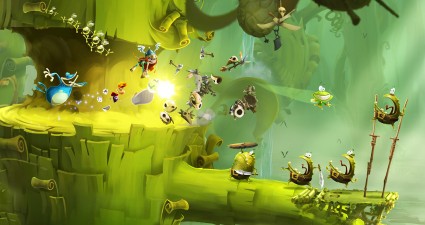 Running Man
Okay, so remember how slick, smooth and rhythmic Rayman Origins was? In terms of pace and movement, Legends follows in much the same vein, though some clever structural changes prevent it from simply being a re-tread.

For example, rather than starting you with only basic movement again and having you reacquire Rayman’s traditional skill set piece-by-piece as you did in the last game, the R-man has access to all his moves right from the off. This is a very smart decision from Ubisoft Montpellier, not only in preventing you from covering old ground but also allowing you to hit the ground running (running being something you’ll do plenty of throughout, of course). With this, you’ll be punching through enemies, floating across large gaps and running up walls from the moment the game starts and the pacing feels much better for it.

Rather than saving Electoons, this time around you’re trying to rescue Teensies (the tiny, blue snouty creatures) and there can be any number of them to find in a given level. With their number being tied to game progression, finding them is not only half the enjoyment in Legends, it’s essentially your entire objective throughout the entire game. Thankfully, finding them really is that fun, as you look out for secret areas, rescue them from brawny enemies or break them free of their cages with a well-timed kick mid-jump. Lums once again act as ‘coins’ for Rayman, only this time their gathering is essential to many of the character and skin unlocks, while Princess Barbara and her crew are playable after you rescue them from their given missions.

There are plenty of new things in Legends too of course. Murfy makes himself useful in several levels throughout, hovering over certain intractable elements of the level that you can utilise with a quick button press (or screen touch in the Wii U or Vita’s case). Whether this means enabling a platform for you, shielding you from danger or (my personal favourite) tickling an enemy long enough for you to punch them, his inclusion adds yet another layer of gameplay that you need to think about.

It’s another master class in level design from Ubi Montpellier too. Every level – timed or free roaming – is built perfectly for the game’s unique brand of precision platforming. Underwater levels again are a total joy to gracefully dart and glide through, while the development team also don’t seem above a subtle nod to other franchises, leaving me convinced that an entire world pays tribute to Curve Studios’ Stealth Bastard (Stealth Inc. on PSN).

The penultimate level in each world is always a boss fight and these are epic three-stage fights against huge creatures. Each obviously has its own pattern that requires you to think fast about your character placement, and subsequently the exploitation of the enemy’s weak spot. Once you’ve gotten the pattern down you can usually down them in a few minutes, but they’re all enormously fun to battle, and the demise of one serves as a terrific nod to Terminator 2. 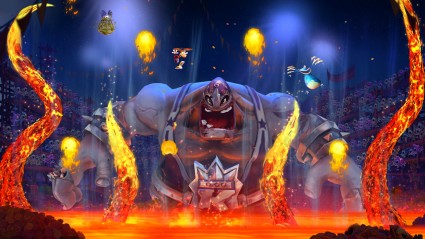 The boss fights are quite the spectacle.

My absolute favourite facet of the game, however, comes in the form of the musical showpieces that act as finales for each world. In these glorious levels, Rayman must dash through as quickly as possible, jumping and moving to the tune of the accompanying song. Every jump or punch, every enemy’s motion, hell, every single part of the level’s make-up contributes or at least runs in time with the rendition of a famous track backing it. Ram Jam’s ‘Black Betty’, The 5.6.7.8’s ‘Woo Hoo’, and an awesomely Latino flavoured cover of ‘Eye of the Tiger’ are obvious highlights.

The important thing, of course, is that all of this is tied together by the very tightest controls, a factor hugely significant as the game regularly tests your reflexes and speed of thought. It’s a game that sees environments torn down around you while you scramble, has enemies popping out of unexpected areas, and beasties chasing you as you go. All the while you need to be on the lookout for captured Teensies or ways to use Murfy to your advantage. There’s clearly a lot to think about while playing and the handling is that important to it all.

There’s so much to talk about and I could go on and on here, but it’s best that players discover things for themselves. Just rest assured that there’s an amazing amount of content in the form of bonus levels (including remastered levels from Rayman Origins), mini-games and challenges, while completionists will revel in the quest to find 700 Teensies (I haven’t even come close). It’s all entirely worthy of your attention.

Painterly
Following the Origins blueprint for its bright, whimsical cartoon art style, Ubisoft’s UBIart game engine is in phenomenal form once again with movement on every single part of the screen. Much like Origins before it, every level feels living and organic, but not to the point of being distracting, which is no mean feat. It truly is like looking at a moving painting at times.

It’s the little details, however, that mean that it just surpasses its predecessor visually. Enemies move into and out of the screen like never before, no more so impressively than when fully 3D-rendered bosses are chasing and lurking, knocking down scenery that affects the platforms you’re running on. Everything just flows impossibly smoothly that it’s hard to believe what you’re witnessing at times.

Eye of the Tiger
While for the most part Legendsfollows the same, cutesy, gibberish-laden tunes of its predecessor, at times there’s definitely a darker, more dramatic undertone to be heard here and there, usually saved for boss fights or the situations where you’re running from a wall of fiery death.

The catchy nature of the series’ original music is still very the soundtrack’s focal point though, and if you’re like me you’ll be humming away once you’ve heard the more persistent hooks a few times. There’s just a marvellous mix of cultural styles too, with flavours of Bollywood, Greek and Spanish used in the most unexpected of ways. I mean, once you hear the game’s version of ‘Eye of the Tiger’, it’ll be the only one you’ll want to hear ever again. 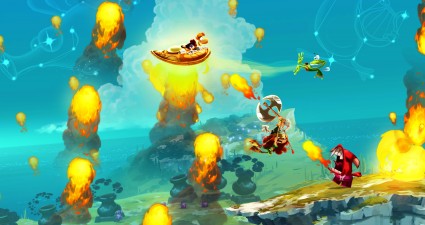 Murfy has his uses!

Four Rayman army
So, like Origins before it, Legends only features four-player local co-op and, unfortunately, I’ve only ever owned one PS3 pad so was unable to pull my wife or any friends or family members into a game. I did, however, play Origins on 360 a few times with my wife, and that was a blast, so as long as it’s similar in execution I can’t imagine many being disappointed with the ability to play with – or slap – their friends.

Run to the shops; don’t even stop to breathe.
While I’m not entirely sure whether I particularly rate Legends over Origins yet, it’s almost certainly on a par. That, my friends, is one hell of a compliment to this classy sequel. I adore it.

Just like its forebear, Rayman Legends too effortlessly strikes the right balance between rhythmic elegance and challenge; between flamboyant art style and intricate level design; between old and new ideas. Ridiculously polished and utterly gorgeous from the get-go, you’re looking at another genre classic from the rebooted Rayman.

Buy it without a second thought.