I’ve never really played any of the Rayman games before, except for retroactively in research for this review. I don’t know why, but for some reason it just never appeared on my radar. That was until I first saw footage of last year’s Rayman Origins; a classic, 2D platformer which moved and flowed in a way the genre just hasn’t before. It was revered by the gaming press.

Still, despite being the darling of the critics, Ubisoft’s actions would have you believe that they wanted it to sell badly. For some baffling reason they chose to launch it in November, the same calendar month for all blockbuster titles, and were expecting this charming little platformer to complete against the likes of Call of Duty, and even their own Assassin’s Creed: Revelations. Utter madness.

Even so, this is a game that deserved attention. Thankfully, Ubisoft have given Rayman another chance to get the limelight as a Playstation Vita launch title.

Should you give it a second look?

Link’s not the only hero who likes to sleep!
Rayman, Globox and their chums love nothing more than to lazily snooze the afternoon away in the peaceful Glade of Dreams. Unfortunately for them, the group are snoozing a bit too loudly for the likes of an evil granny from the Land of the Livid dead, who secretly plots her revenge.

As they sleep obliviously underneath the aptly named ‘Snoring Tree’, she unleashes the Darktoons upon the world, capturing all the Electoons, and Betilla the Nymph and her sisters. It’s up to Rayman and the gang to free them all and restore peace to their beloved Glade of Dreams. 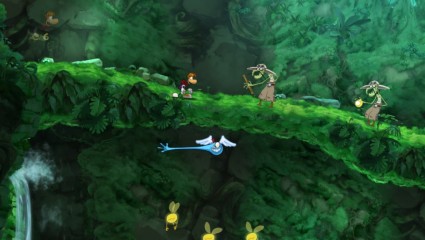 Left to right…
The core ideals of Rayman, right from the very first game, are present and correct. As Rayman you must visit each of the four locations on the game world and tackle all of the levels therein. To keep progressing throughout the game, you need to free the cutesy Electoons imprisoned, typically, in one of three cages spread throughout the levels, with one of those always at the level’s end. You’ll need to free more, though, if you want to see and do absolutely everything.

You can free more too, by collecting a set number of Lums as you play through or by tackling a time trial once a level is completed. Lums are golden, flying creatures that are scattered and hidden all over the levels, and by grabbing the required number by the level end, you’ll be gifted another set of Electoons. To help you reach those required numbers, there are a few tricks. Occasionally you’ll be able to catch a King Lum, which doubles the amount of Lums you collect for a short period of time, signified by awesomely chirpy music. There are also Skull coins which, once collected and held for a short period of time without incident, will grant you another 25 Lums for your tally.

Of course, it wouldn’t be a platformer without power-ups and abilities, and there is one new ability in each new area for you to collect by rescuing Betilla the Nymph and her sisters. From initially having nothing but jumping at your disposal, you’ll be punching and slapping, floating gracefully, running up walls and diving into water before you know it. These abilities are not only fun, but essential when it comes to replaying levels to unlock all areas of the game world. There are a few disposable power-ups too, with a floating heart that allows you to be hit once, or a fist that gives you a projectile attack.

You’ll also occasionally take a break from traditional platforming to hop onto the back of a Mosquito for some classic side-scrolling shooting action, where you can fire at enemies or suck them up, while trying to avoid the hectic number of enemies and dangerous obstacles. Other areas will see you running as fast as you can, as the level literally comes down around you.

There aren’t much in the way of Vita exclusive features outside of being able to ‘pinch’ the screen to zoom in and out, nor is there any inclusion of co-op multiplayer on any level. There is, however, a new Ghost Mode, which allows you trade your level times with friends. I’ll be completely honest; it’s not something I delved into all that much, and as such I suspect it’ll only have limited appeal. This isn’t the type of game in which competing with friends adds value, unless they happen to be playing alongside you, that is.

To be fair, I’ve explained the game fairly clinically so far, and while it does keep all the hallmarks of traditional platforming at its heart, I haven’t fully expressed just how fun it actually is. The game runs and controls phenomenally well and so fluidly that it puts other 2D side-scrollers to shame.

There’s a lovely rhythm to it, too; one a little similar to LittleBigPlanet, which will come naturally to all that play it. It still has its share of hair-pulling and challenging moments, though. Always for the right reasons however, such excellent level design or hidden areas and items that will tempt you in, despite the path being fraught with danger. Not once do those challenging moments come at the expense of fun either; it’s always fair, always something you could have done or timed better.

Honestly, on gameplay alone, it’s one of the best platformers I’ve played in near twenty years, and it looks so damn sweet too… 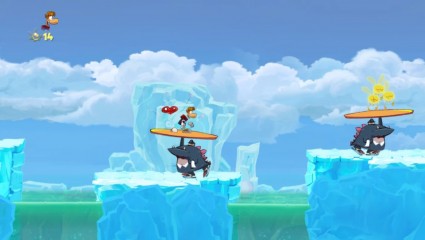 Locations are varied and full of life!

A living painting
It looks so damn sweet because it utilises Ubisoft’s new ‘Ubiart’ engine, which allows artists to do what they do best and lets the engine do the bulk of the animation. Rayman Origins is flawless visually, with its colourful, cartoon innocence masking the darker undertones. The animation, not just on characters or enemies but also the levels themselves, no matter what type of environment, is absolutely unrivalled. The entire world in which you leap around exudes this awesome feeling of life.

It really does takes your breath away the first time you see it, as it really is just like playing a living painting or cartoon. Truly spectacular.

Catchy gibberish!
While it features nothing traditional in the way of vocal work outside of cutesy gibberish, it’s the cheerful, infectious music that’s the real star of the show. I mentioned it before, but from the very first moment you collect a King Lum you’ll be sold, and humming along to every subsequent tune.

The relaxed, catchy harmonies of the underwater sections were a particular highlight for me; not only relaxing but harking back to cartoons of old. I’ve long since finished with the game, and yet it still rings around my head.

Just fricking buy it already!
Rayman Origins is one of those special games that comes along every so often and breathes new life into an often overlooked genre. If you didn’t at least try the game the first time around and you find yourself with a Vita, then I implore you to give this nifty little title a fresh glance as soon as you can.

In spite of missing the slapstick fun of the cooperative multiplayer, it’s not only a great fit for Sony’s new handheld platform, but it’s one of the best platform games ever made. Period.