Resident Evil has been a series in transition for sometime now. Resident Evil 4 saw the game go into a more action-orientated direction, Resident Evil 5 introduced a co-op angle to the series and now we have Resident Evil 6. Just what does it have to offer to the long-standing franchise?

Consisting of four campaigns, Resident Evil 6 covers the story of the ‘C Virus’, a virus which mutates people into zombies or sometimes monsters. Oh, and you’ve got to stop it. Sound familiar?

Starting off on a positive, Resident Evil 6’s campaigns intertwine with each other, meaning to get the full story you’ll need to play as all four characters. This is a neat idea that sees you occasionally running into the other characters throughout your playthroughs. During your time with the different campaigns you’ll be going over old sections from different viewpoints which is, like I said, a nice idea.

This is where I quickly run out of good things to say. Whilst the attempt of creating these intermingling narratives is commendable, the narratives themselves are not. Characters are not that interesting, particularly the new ones. In one scene you’re introduced to a new character who then dies 40 seconds later. Forgive me if all of the cries of “NNNOOOoooo…!” don’t bring tears to my eyes, but instead make me roll them.

Some of it is just flat-out badly explained. One character gets mentioned by name during the last two hours of this thirty-hour game and we’re meant to know who they are? I didn’t have a clue who this person was and, according to Google’s pre-emptive filling out of my search bar, I wasn’t the only one. 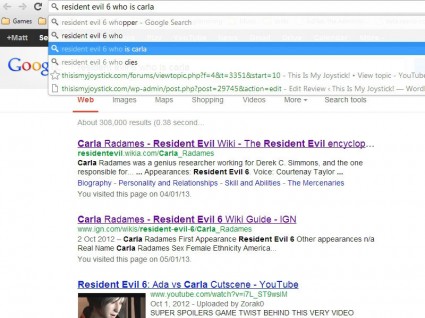 Seriously, this person just gets dumped into the story.

It’s a shame that this game has such a poor tale, as the cutscenes with which the story’s conveyed are very nice. There’s superb animation, great facial movements and the character’s models look brilliant. There’s a bit of a heavy reliance on slow-motion, but in the main these sequences are very well done. They’re not good enough to make me care, but credit where it’s due. Nice cutscenes Capcom. Props.

Part of the reason behind this inability to truly care about what’s going on is that the game feels like it’s written by a hyperactive three-year-old who’s drank a litre of Coke:

There’s no build up and pay off to the action. It’s constantly blowing up in your face and that’s not exciting. It’s just loud and tiring. By the time you’re flying around in a fighter jet and a giant T-Rex monster (I’m serious here) throws a car at you, you’ll wonder if this is Resident Evil at all. That’s if you still care.

T-dious Virus
You won’t spend (thankfully) too much time in vehicles. Most is spent on foot, with you fighting zombies and the such. This isn’t much fun either, I’m afraid.

Depending on who you’re playing as, you’ll have a selection of different weapons. Not a huge selection, or even a selection you have control of, but a selection nonetheless. With weapons being unlocked at predetermined points, there’s not much excitement in unlocking them as none seem to be better than others. The only reason you’ll switch out a weapon is most likely because you’ve run out of ammo, not because you prefer one over the other. 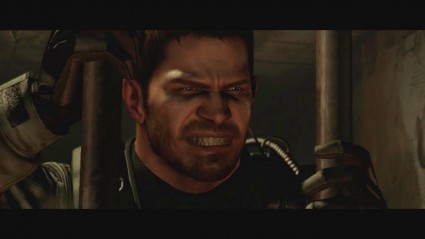 Oddly, the ability to upgrade and unlock better weapons has been removed. No more “Whataya  buying?” from mysterious vendors; instead you’ll earn points and use these to buy perks at the end of every chapter. These perks, of which you can only equip three at a time, don’t seem to make that big of an impact on proceedings. Often, perks you unlock at the end of each chapter will only really be useful in the chapter you’ve just completed. So, unless you plan on going back and replaying the game, the perks won’t be that great to you.

The shooting itself feels okay, in that you aim and then you fire. The problem for me arises when you’re trying to understand if what you’re doing is right.

Are you killing the monster? Is it working? What do I do here? These are questions you’ll ask yourself many times as the feedback from the game just isn’t present. In previous action-packed Resident Evils (4 and 5 in particular), you were in no doubt that the bullets were hitting the enemies and that the enemies were getting hurt. They’d stagger, they’d grab the shot body part or they’d fall over.

In RE6? Not a lot happens. You will unload clips into enemies and they won’t so much as flinch. Occasionally, when a zombie does show signs of being hurt, that’s often your queue to get in close and finish the job with some mêlée. Another queue telling you to get in close will be the running out of ammo. That will happen a lot.

For some inexplicable reason, RE6 seems obsessed with getting you to move in close to these enemies and bust out some hand-to-hand moves. Prompts will pop up telling you to press RT when a zombie is staggered. So, being a good game player and doing exactly what you’re told, that’s what you do. Why this is so heavily promoted throughout the game, I don’t know. The close combat system isn’t very good or interesting. Jabbing away at the RT button just sees you starting a striking animation which you can only hope hits the enemy. Rinse and repeat. 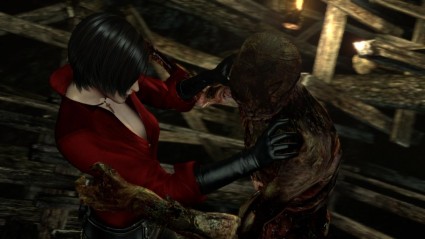 No time to dance Ada! There’s a terrible story to get through!

Another problem with getting in close to these enemies is the fact that they’re all ready to grab you. This gets annoying, as grabs can happen one after the other with no chance of escape, and each time you’re in the enemy’s clutches a quick time event pops up. These QTEs are yet another massive issue I have with RE6.

They’re used everywhere. Cutscenes that seem passive will suddenly throw a QTE at you. Missed it? Well, you get to watch the cutscene again, but now you’re ready to push A, rotate the left stick or press RT. Sound exciting? ‘No’, you say? Well, you’re right. It’s tedious.

Ada Wrong
Another trick is sections I like to call ‘Run-away bits’. These involve you running away from a landslide/monster/explosion, any of which can kill you instantly. These aren’t very fun and will have you fighting with the camera. The fact it insists on swooping about and giving you a good angle of the death that’s chasing you just ends up causing confusion. Often you’ll be running into a wall and getting instantly killed by whatever you’re fleeing from.

When levels aren’t relying on these cheap tricks, you’re simply being funneled through corridors and occasionally solving a dull puzzle. The areas you find yourself in don’t really warrant exploration, as there’s never much to see. The only reason you’d want to snoop around these places is to determine if there’s any crates with precious ammo lying about. Mostly, you’ll want to hurry up and get to the next door to stop the infinitely respawning enemies appearing. 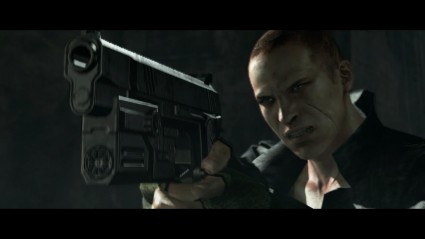 Shh. Put that away. This is a stealth section.

I won’t even bother trying to explain how poorly implemented the stealth sections are in this game. Yeah, that’s right. Stealth. Sections. Sections. Plural. More than one!

Lesser of the evils
On a positive note, the levels look quite nice, particularly the China levels with their neon lights.

In fact, the whole game looks pretty nice. There’s high polygon models for the main characters and although the monster design is pretty uninspired, they all look good. It does nothing to make the cutscenes better, though, and it doesn’t help the game play better.

Be gone, Kennedy
Moving on from visuals, a quick mention of audio. It’s fine.

The voice acting, for an RE game, is pretty good. The problem occurs not with the delivery, but with the lines being delivered. Each campaign has a duo exchanging cliché-ridden one-liners, which get very old very quickly.

Speaking of your partner, every campaign is playable in a co-op mode. This works well enough, though makes the ammo problem even greater now that there’s two of you vying for those precious bullets. It can also lead to arguments when one person dies during ‘Run-away bits’, where you’re bumping into each other and the camera is doing its best to make your life miserable. 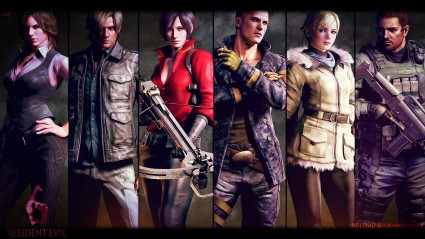 One huge problem with this attempt at making every campaign co-op is Ada’s story. It doesn’t need an extra player and whoever plays as the nameless ‘Agent’ will be banned from opening doors or pulling levers. It’s like the second player isn’t meant to be there throughout Ada’s travels. Why bother making this campaign co-op?

Speaking of “why bother”, here’s where I conclude my feelings on the game.

The game controls poorly and there’s nothing here that interests me. The story’s poor and the characters that return from previous RE games just aren’t developed or used to great effect. Sherry Birkin hasn’t been seen in a game since RE2, and yet she’s dull as anything.

The people proclaiming the amount of content here as a good thing confuse me. This is a boring game that’s no fun to play and it goes on for over 30 hours if you complete all four campaigns. How is the part where it goes on for 30 hours a positive?