Asphalt is most well-known these days as the series of racers available for Android and iPhones. I have Asphalt 5 on my HTC Desire, which is okay for a quick mess-around but is ultimately plagued with bugs, irritating touch screen/accelerometer controls, and appalling performance issues. Thankfully, I don’t feel too short-changed, having only spent a quid on the game in a sale; not to mention that its usual asking price is only about £3 anyway.

Gameloft have now brought Asphalt 3D over to the Nintendo 3DS, and I have to say that having been transferred to a dedicated gaming console and had its price multiplied to an RRP of £39.99,  my expectations are higher than for its mobile phone-dwelling brethren. Let’s see if it delivers.

Leader of the cack

Racing in Asphalt is reminiscent of Burnout, with a high-speed, arcade style involving copious amounts of nitrous and shoving your competitors off the road. Sadly, relating the mostly excellent Burnout series with Asphalt is doing it a great disservice. The first time I fired the game up I was not too unsatisfied, if a little underwhelmed; however, the longer you play, the more its cracks and rust begin to show through the metallic paintwork.

17 different tracks, over 40 licensed vehicles and 14 leagues of 70 events sounds good on paper, but let’s see the breakdown of how that works in practice. Firstly, the tracks all have differing scenery but feel incredibly basic, repetitive and uninspired, with a formula of several easily discovered shortcuts for each one. 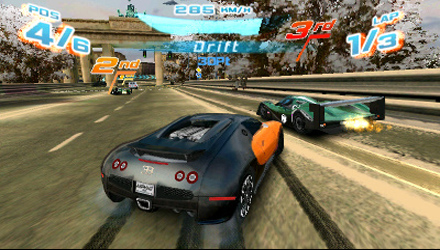 Even Bugattis and Bentleys don't make this game worthwhile.

The unlockable vehicles and slew of upgrades should be one of the game’s highlights, if it were not for the fact that after obtaining a decent car, the next few to be unlocked are generally worse than the one you already have, completely negating a rewarding feel of progression. Vehicle upgrades are always useful, but these must be painstakingly applied one-by-one for every vehicle you acquire, and when unlocking a new one after a race, you have to quit back into the menus and apply it before continuing, if you wish to use it.

Finally, the events are marred by its selection of game types, several of which are absolute stinkers. Race, Head-to-Head and an elimination-style Leader of the Pack are playable enough, but then High Speed Chase, Cash Attack and Drift come along to ruin the day. High Speed Chase is not terrible but just insultingly easy, as the moronic cops that try to take you down just ram in to the back of you, which actually knocks them out.

Cash Attack and Drift manage to reach an all new level of banality. Both are very similar to each other, requiring a certain amount of cash from stunts, or drift points respectively. These are completely broken in design, as the requirements are set very high, yet there is no time-limit and it really doesn’t make the blindest bit of difference if you saunter over the finish line in last place, long after everyone else has got bored and gone home. 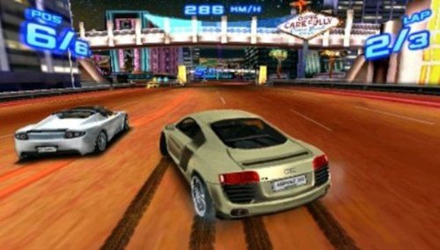 You go on ahead Mister; I'm gonna be here for the long haul.

Drift is perhaps the most tedious of these two, where it becomes apparent that driving at speed actually gets you fewer points, so the way to pass the stage is to drift over and over, slowly and mind-numbingly, across the whole track, even the straights. If you’ve finally reached the finish line and still haven’t obtained enough points, you can happily just do a U-turn and continue getting more points at your leisure until you pass. Gameloft: please look up the definition of “fun” and “challenge” in the dictionary before making another racing game. I beg you.

Dude, where’s my car? On second thoughts, I don’t want it…
My dismay doesn’t end there, because even the basic driving mechanics aren’t really up to snuff. The controls are a step above the awkward accelerometer method employed in the Android version of the game, but are still too unwieldy and unresponsive, with the drift mechanism seemingly deactivating at will. Physics are also implemented abysmally, particularly shown in the bizarre manner in which cars act when they collide. Phasing straight through each other, instantly grinding to a complete halt, or jerking around uncontrollably are all commonplace behaviours, and totally unconducive to any sense of immersion.

In fact, bugs and glitches are rife throughout. I’ve seen opponents getting stuck in scenery, or driving around the track in the wrong direction. I’ve become stuck in a civilian’s vehicle, and suddenly been stopped by the police as if by magic, when I was driving fast and completely untouched. The game is also hampered by a very severe and distracting framerate that drops whenever the action intensifies on screen, just to further add to an already mediocre experience. 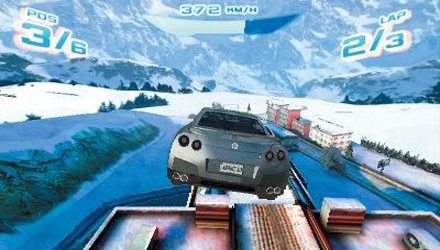 Almost as high as I feel like throwing my 3DS whenever I'm playing.

The longer you play Asphalt for, the more irritated you shall inevitably become. The aforementioned civilian vehicles have a habit of popping up unexpectedly after being obscured by power ups, other racers and corners in the track. Ramming into the back of one annoyingly slows you down, but a head-on collision will usually cause a (woefully animated) crash cut-scene. After being in first place for the majority of the race, to unavoidably have this happen and send you to the back of the pack just before the finish line is excruciating.

After a while, the prospect of firing up Asphalt 3D becomes less appealing than Gordon Brown in sexy lingerie. Even my Nintendo 3DS itself has begun to revolt against the game, crashing practically every time after exiting, as if trying to vomit away a particularly bad hangover. I can only presume this is another sign of bad programming on the game’s part; the irony, however, is hilarious.

Fun prevention, in the third dimension
In a slightly redeeming fashion, the visuals of Asphalt 3D are at least well done on the whole. The 3D effect is implemented very capably, helping to perceive upcoming corners and obstacles on the track. Cars and environments are colourful and vibrant, although overall the game doesn’t look much better than the versions on mobile phones, with improvements limited to slight enhancements in textures and lighting. 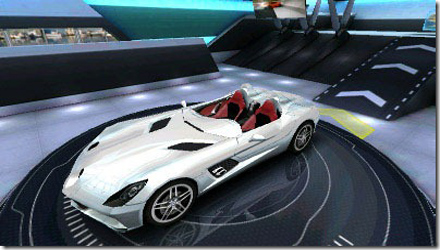 Looks pretty, doesn't it? To be honest you're better off leaving it there, than finding out how it actually drives.

What lets the side down here most of all are the bugs that I was talking about. Seeing cars literally teleport all over the place, behave erratically and physically merge into each other is extremely off-putting. Arcade racing doesn’t have to be realistic, but that’s just taking the piss.

The sound of your teeth gnashing together
Arcade racing game commentators often have a habit of grating away at people’s ear holes, but Asphalt’s speaker takes this to a whole new level. Thankfully, her nonsense is mostly limited to cut-scenes introducing the tracks, which can and will be skipped every time. Sound effects are average, and the fast-paced techno soundtrack is relevant but instantly forgettable. The only song that comes to mind positively is the main menu theme, a chilled-out tune that relaxes your mind and lulls you into a false sense of security, ready for the horrors that await you once you actually start playing.

Share the hate
If anyone else you know has been conned into buying Asphalt 3D then you’re in luck, because a multiplayer mode has been put in place for you to share the contemptible experience together. Safety in numbers, and all that. An online mode might have actually been a positive mark to put next to the game’s name, but sadly this is absent. Quite a poor show really, when even the iPhone version has this feature included. 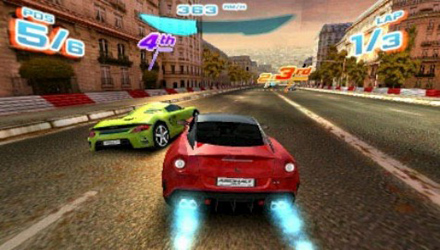 Quick, to the finish line! So we can put this down, and go play something else

One player hosts, selects the track, chooses whether to include AI players, and lets up to five other players join. I’ve been unable to play the mode myself because no one else I know owns the game. I can only presume that it is akin to the single player experience, however, and thus shares the same issues.

Asphalt, or just Ass-faulty?
I can’t really put too much blame on the actual developers for how Asphalt 3D has turned out; they probably did their best under the circumstances, in all honesty. What this game reeks of is under-funding and rushed deadlines, with it being pushed out to meet the release of the 3DS, regardless of how ready it was. It’s essentially just a cheap cash-in, made to capitalise on the small selection of games available, and make money from clueless early adopters who don’t know any better.

There’s a spanner that’s been thrown in the works for Asphalt’s plan, however. Another release title is out there, one which fills exactly the same niche: Ridge Racer 3D. What’s more is that it is vastly superior, in every way (watch this space for a review of that, coming soon). As it stands then, there is absolutely no reason to buy Asphalt 3D, especially at its laughable RRP of £39.99; it’s really not much improved over the mobile versions.