Contrary to the title, intended demographic and pretty much everything else you’d expect other than the actual gameplay, most of the major assassinations you’ll execute in Assassins Creed 2 will be extremely lacking in any kind of stealth. A lot of the missions are set up in such a way that your target is at the tallest tower or a heavily fortified castle rather than in the middle of a crowded market, essentially negating any meaningful use of social stealth. This wouldn’t be so much of a problem if some controls had been implemented to facilitate sneaking around a bit, but Ezio is incapable of hugging walls, using the shadows or even crouching. Again, not an insurmountable problem, it should be difficult to reach your target without alerting attention to the guards. Unfortunately however, the punishment for being noticed is completely insignificant and inadequate. I mean, all they do is send an entire garrison full of guards to take you down and what the hell is that supposed to do?

Quite a lot you might think, and you really should be right, but unfortunately the combat in Assassin’s Creed 2 is again so insultingly easy that you could probably nip off for a snack, toilet break or cover to cover analysis of The Bible and return to find you had only lost a margin of your health bar (through a fluke hit). Pressing the attack button at the right moment will often result in an instant kill counter, nothing at all wrong with that on its own and they are often very nice to look at in all their brutal glory. However, the counter attacking window is so large even the most badly mistimed button pressed will result in success, not that you’ll mistime it very often since enemies will patiently wait and strike one at a time, no matter how many of them crowd around you.

Extra weapons have been added to add a little bit of spice to the combat, with each one having a kind of special ability; polearms can be used to sweep the legs of everyone around you for example. While the new weapons do offer a bit of variety and it’s worth trying them all out just to see the counter kill animations for each one, the combat is so basic that none of them offer any kind of advantage to the other as they operate in the exact same way. You really do have just as much chance of winning a fight with a sword or mace as you do with a spear or even your bare hands to a certain extent. There’s nothing wrong with conveying the image that Ezio is a skilled combatant (he bloody well should be) but not at the expense of one of the game’s core elements. I want to feel like I’ve came through a tough, intense and bloody battle, but most of the time it’s difficult to raise any kind of emotion after slaughtering a target’s entire security outfit, which often results in a feeling of hollow victory when you finally do eliminate your mark. 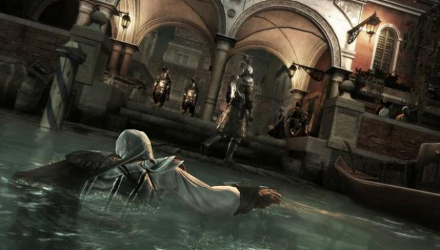 The free running was one of the successes of the first game, allowing you to reach almost any height if you knew where to look for the visual cues. It feels like the player is given a bit more control this time round and Ezio has a much less on rails feel as he glides over the rooftops. I found that it was necessary to take an extra split second to consider where I was going, which yields much better results than simply holding down the “Play Game” button as in Assassin’s Creed. A grab function has also been added which allows you to reach for ledges that Ezio might otherwise ignore or gradually drop down a tall building one window frame at a time. It’s a simple function but grants a lot of control that was lacking previously, although I’d very much like to have words with the bright spark who decided to assign the grab action to the same button as the “let go” function, which as you can imagine is a source of occasional frustration.

It should be noted that I did come across a few, sometimes fatal bugs during my time with Assassins Creed 2. There have been a couple of occasions where every guard in the city has just flat out refused to attempt to attack me, just infinitely circling Ezio without making any effort to block, dodge or counter my incoming blade. Collision detection sometimes loses track of where you are, causing Ezio to act as if he is looking over the edge of a building even though he’s standing at ground level, and there was one occasion where the entire thing rather ungracefully fell over in a heap on me. It’s disappointing that the otherwise high production values are broken up by these glitches that really take you out of the moment, and I hope they will all be resolved in the near future.

View to a kill
Masyaf, Acre, Jerusalem and Damascus have all been thrown out in Assassins Creed 2, but their replacements have had just as much care taken in their recreation and it really shows. Ezio’s quest will take him to Florence, Tuscany, Venice, Rome and more, with each location providing some refreshing variety at least on an aesthetic level. The sprawling city of Florence is peppered with beautifully recreated landmarks such as the Basilica of Santa Croce and the Palazzo Vecchio, the effects of Venice’s waterways are pretty stunning at times while Tuscany gives you an expansive farmland to explore. It’s a very useful thing to be able to travel to a vastly different if things start to get a bit stale, which again offsets the repetitiveness that was so prevalent throughout Assassins Creed. It looks like focusing some attention on the general template of the cities hasn’t detracted from the smaller details within them either. It’s hard to believe that each square inch of the world has been lovingly hand placed, but if an algorithm was used to generate blocks, buildings or streets, I never came across any evidence during my playthrough to suggest that this was the case.

Despite the the combat and free running lacking in difficulty, this is slightly compensated by the smooth, natural way they are presented through some great character models and animation. Each time you jump, vault, climb or grab onto any obstacle it all flows together with grace that is befitting of Ezio, which gives the whole mechanic a much more satisfying feeling despite the feature itself being overly simplistic. Combat also benefits from this although to a lesser extent because it is just too easy to disguise. Counter kills are well animated with a helping of additional gore heaped on top for effect and the way Ezio can dodge and weave between enemy attacks is flawless. The number of animations for each weapon are pretty limited however, so as nice as it looks to leave some impaled on their own polearm, it does lose its appeal eventually and that’s when you realise you’re actually just pressing the same few buttons in every fight.

It looks like facial models have been redesigned to allow them to be more expressive, or maybe I just never noticed this before due to the complete absence of any cinematic close ups in Assassins Creed. To this end Ubisoft have succeeded, but at the slight expense of some of the textures looking a bit one-tone and bland very occasionally. Some of the characters features are also a little bit out of proportion, Lucy being particularly noticeable. Oddly, see seems to resemble the absolutely lovely Kristen Bell a bit less in the sequel, with her exaggerated Jokeresque mouth acting as a bit of a distraction every now and then.

The sound of silent kills
Assassins Creed 2’s more substantial plot allows for a lot more dialogue between characters (although thankfully the post assassination yawnfests have been drastically reduced in size). To this end, the voice acting has been performed to a very high standard across the board, although it helps that the script is just a lot more interesting this time round. The wooden dialogue that occurs in other Ubisoft titles is all but non-existent (most of Shaun’s line still fill me with incandescent fury though) and most of the character’s accents and tone are executed with a very polished delivery.

The special effects also contribute a feeling of grandeur to most of the actions Ezio performs, the loud clang of swords colliding, the rush of air as you jump from a height, the sickening squelch as you drive your blade into a nobleman’s throat, they’re all visceral, over the top and really tie up the final presentation of the game very nicely.

Buy it, try it or avoid it?
Assassin’s Creed 2 is really what the first game should have been, in that it gives you the freedom to use Ezio’s considerable skills to explore and reap the many rewards of its vast cities. All of the flaws from the previous game at least show evidence of attempts to remedy the situation, with the repetitiveness from the first game being buried under a sea of varied new content. A few of the gameplay features are still left wanting however, with the unfulfilling combat in particular really bringing down a lot of other things with it. Being able to kill swathes of enemies at the drop of a hat takes the fun of both open combat and the assassinations, and as time went on I found myself just wanting to get each fight over as quickly as possible (which, guess what, wasn’t all that difficult).

There is enough interesting and satisfying content outside of this to make me more willing to ignore this however. The story is brilliant this time round and puts a lot more meat on the bones of Assassin’s Creed’s canon, while the new mission types all succeed in keeping the player interested all the way to the end. It still needs work, but if Ubisoft treat the future sequels that are surely on the cards with as much of an open mind as they did here, I imagine that things can only get better in the long run for Desmond’s ever expanding bloodline.