The arcade version of Bejeweled 3 had me excited for several reasons. After playing and reviewing the game on PC back last year, I noted a few issues with the game which I was hoping Popcap would explore in future releases.

Now the Xbox version is out in the public domain, I can report back my findings. Did I find what I was looking for?

Rich beyond our wildest dreams
Without question, Bejeweled 3 is the definitive Bejeweled game. In addition to the classic and Zen modes we’ve all come to know, the game offers several other gameplay types, each very different from the other, but all introducing some exciting changes to the series.

Quest Mode is perhaps the most interesting. In this, you unlock relics by completing a series of mini-challenges which have been inherited from existing modes, but also add new ones. This is a real favourite of mine as there’s a real sense of progression to it, rather than many of the other modes which thrive on an arcadey, pick up and play style. It’s also an extremely varied mode, which means it will regularly keep you on your toes, and have you continuously thinking about every move.

Then you go to modes such as Butterflies, which see a trail of butterflies floating towards spiders at the top of the screen. You have to save them by aligning them in a row/column. Poker is also cleverly handled in Bejeweled 3. You start the game with a hand of five cards, and every time you make a match, the jewel will appear on one of the cards. After you’ve done this five times, your hand is valued. So, if you have five of the same coloured jewels on each of the five cards, you’ll get a flush and receive maximum points. However, skulls start to appear as you progress, and if your hand matches any of the bonuses tainted by a skull, it’s an instant game over.

There are also faster paced modes like Lightning, where you are trying to collect points while racing against the clock, and need to collect time bonuses in order to stop the timer from reaching zero. Finally, there is Ice Storm which is another favourite of mine. Columns of ice start to form from the bottom of the grid, getting faster the deeper into a round you are. You have to stop the columns from freezing over your grid by destroying them with vertical jewel alignments.

As you can see from the outline of these modes, Bejeweled 3 can deliver a nice balance of both adrenaline and zen. 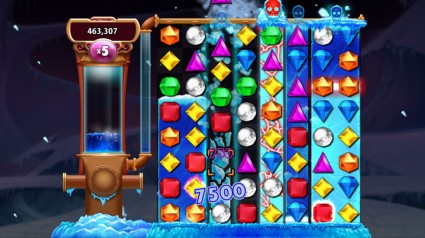 It's a straight port of the PC version...

Slot, drop, BOOM!
The game handles quite well on an Xbox Pad, and is certainly less stunted when compared to Bejeweled 2, yet still fails to manage the true precision of a mouse. It’s a lot easier to control the game than ever, however, and there are certainly marked improvements over previous instalments.

The variety in game types make Bejeweled 3 an engaging and exciting release, one that provides a lot of entertainment in a single package. Each of the modes offers the player something different each time, which helps keep Bejeweled 3 feeling very fresh. Unfortunately, my biggest issue with this release, just like the PC version, is that Popcap have still not included an online component to the game. This feels like quite a large step backwards for the series, especially with Blitz Party releasing earlier this year supporting up to 6 players over Xbox Live. It’s also disappointing as Blitz party only allowed you to play against a friend for 60 second periods, whereas Bejeweled 3 would allow scope for longer, more entertaining matchmaking.

Another odd design choice comes in the form of the timers. After playing one mode, you’ll get used to looking at one area of a screen, and assume that will carry over into the other modes, but when you change modes; you find that it’s changed position. This makes quick glancing awkward, and can actually be a bit of a time waster, especially when you’re playing some of the fast finger modes. To be honest, this feels like carelessness and a lack of continuity, rather than a methodical design choice.

Oooo… shiny…
The high definition upgrade for Bejeweled 3 allows the gems to sparkle all the brighter, and for the game to gleam with more polish than ever. Putting this and Bejeweled Blitz Party side-by-side, you’d hardly believe they shipped in the same year. While Party has a very blue, plain look and feel to it, Bejeweled 3 just bedazzles the eyes with a rich palette of colours and living backgrounds.

Everything about the game feels sleek and modern, with easy to navigate menus, and glorious special effects. For a game that merely focuses on gems, Bejeweled 3 is very beautiful. I know I would… 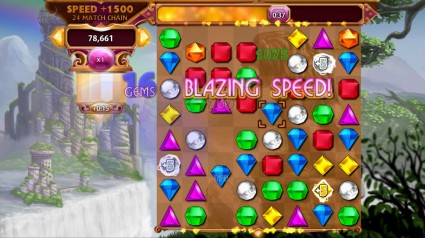 No more moves!
If there’s one thing you can say for Bejeweled, the music is always very harmonising and relaxing. In fact, if you just wanted music to meditate to, then you could fire up the game, close your eyes and use it for that very purpose. It’s occasionally sickly sweet, often very soothing, but always remains incredibly charming. Popcap truly have created an entertaining gaming environment that can be completely stress-free, thanks, in huge part to the in-game music.

Another interesting feature comes in Zen Mode, which allows you to add ambient sounds, like ocean waves and birds chirping to your gameplay experience. This doesn’t always work, unfortunately, as the effects stand out too much at times, rather than just effortlessly blending into the background. Still, it’s quite unique, and while it will probably irritate some, it is sure to appeal to other demographics of gamer.

Lots to do, nobody to do it with
My heart sank when I found no multiplayer in the XBLA version of the game. After playing and enjoying Bejeweled Blitz Party earlier this year, I had hoped for similar experiences with the creative and entertaining new modes in Bejeweled 3. Sure, there are leaderboards here, but those aren’t enough to quench my thirst.

Popcap have given us a straight port of the PC version, which is still a brilliant game, but ships without a core ingredient that would have only enriched the experience. An issue that, unfortunately, also brings the 1200 point price tag into question.