Point-and-click adventure games have been like buses for me lately; I hadn’t played one in years and then, all of a sudden, two came along for me to review at once. I was impressed with WizarBox’s efforts in my Gray Matter review, and next on the agenda is Black Mirror III. Developed by Cranberry Productions, Black Mirror III concludes the series trilogy which began back in 2003.

Gray Matter has set the bar for a quality modern point-and-click adventure game, with beautifully drawn locations, a fascinating storyline, and surprisingly good voice acting and background music. Can Black Mirror III live up to these standards, or should it take a good, hard look at itself in the… you know?

Proceedings are off to a tense start, as the plot continues right from where number II left off. The lead character, Darren Michaels, is seen running through a wood, seemingly followed by something or someone. Arriving on the scene of Black Mirror Castle in flames, he is immediately arrested by the police, on suspicion of murder and arson. After three weeks in jail spent suffering disturbing nightmares, he is released as an unknown benefactor pays his bail. It is then up to Darren to unravel the numerous mysteries surrounding him; the murderous curse plaguing his mind, the crimes that have been committed, and the man who set him free. 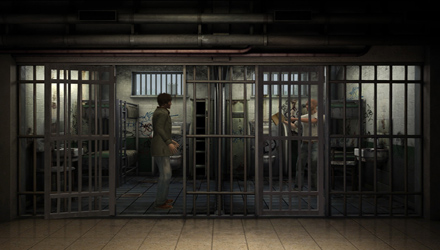 In all honesty I have not encountered any games in the Black Mirror series until now, but thankfully the story is quite easy to grasp for newcomers. This is important, because the developers can’t expect everyone to complete the first two games beforehand, especially as the original Black Mirror is now around eight years old. The main difficulty that sometimes arises is in determining who some of the characters are, although this doesn’t pose too much of an issue. Overall, the story is definitely engaging enough to keep you interested throughout, even if it’s not exactly spectacular, or wildly original.

Point and clickclickclickclickclick…
Playing Black Mirror III will be familiar to anyone who has ever tried practically any other point-and-click adventure game ever made; the formula rarely changes considerably. There’s a hell of a lot of point and clicking required here in particular though; I was shocked sometimes to see the enormous amount of interactive objects in the game world. It can get tedious after a while, because the majority of objects will just make Darren say, “Oh, what an ugly hat,” or something equally pointless, but you always need to check absolutely everything, or risk missing an important clue or item. 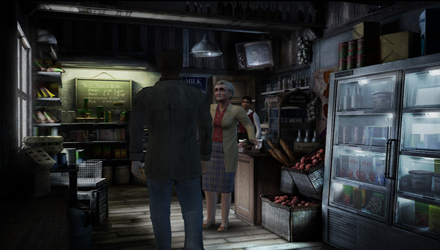 The settings are atmospheric and well realised, if extremely clichéd; creepy mansions, desolate forests, ruins, and graveyards are all present and correct, as you’d expect. Exploring the town and solving puzzles can be involving, but the experience is a mixed bag. For every stroke of genius and tense moment, there is an equally dull puzzle or scene. The game does have its strong points, like the occasional tense or funny scenario, and the several mini-games dotted throughout, ranging from naming unmarked graves to rewiring a broken printer. I kid you not. Then a long-winded cut-scene will rear its ugly head, or something as trite as one of its few pointless sections where death is possible. Heavy Rain made failure or death meaningful, as the storyline would be irrevocably altered to reflect the event’s repercussions. In contrast, dying in Black Mirror III from not clicking something fast enough simply reloads the scenario, for you to click it faster next time. What’s the point?

The pacing of the game is particularly stalled by the unbalanced levels of challenge that are present, ranging from the obvious to the absurd. Maybe I possess the detective talent of a smell-impaired Chihuahua, but the level of guesswork involved really ruined the fun for me at times. Some solutions to puzzles are seriously too obscure. Regularly I found myself clicking different items in my inventory together like a madman, desperately trying to combine them into something more useful. This is made increasingly difficult as the game progresses, by the excessive amount of crap that accumulates in your inventory. Darren must have the biggest pockets in the world, as he manages to cart around an unbelievable hoard of junk.

The fairest of them all?
Black Mirror III is, without a doubt, hampered by its poor presentation. On starting the game, the first thing you’ll be bombarded with is one of the diabolically ugly FMV scenes. My eyes haven’t been so offended by a video sequence since I watched ‘Two Girls One Cup’. Pre-rendered cinematic cut-scenes should ‘wow’ the player with their visual beauty and impressive cinematography, but I just found myself shaking my head at how antiquated they were. 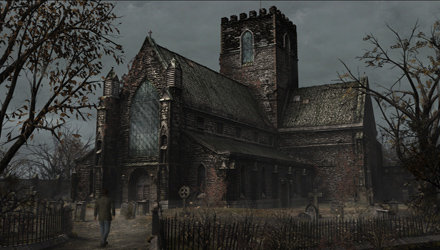 As far as real-time graphics go, character models are low in detail and robotically animated, and the 2D background scenes are acceptable but hardly dazzling. Quite the opposite in fact, as at times the scenes really were too dark. It’s called Black Mirror, but they didn’t have to take the visuals quite so literally. In a game like Amnesia: The Dark Descent, darkness is an important feature of gameplay, and adds to the atmosphere. Here it just makes the game look bland and murky, and occasionally hard to see what’s going on.

Things that go ‘click’ in the night…
The background music and sound effects do a decent job at forging the mood, employing sombre dirges and mysterious noises to set a spooky tone. That said, you’re unlikely to be any more scared than from watching an average episode of Scooby Doo, so wimps have no need to panic. I found the actual sound lacking in quality, which was a letdown, but the biggest disappointment by far is the decision to include very little voice acting. Perhaps I’ve just been spoilt by the excellent spoken dialogue of Gray Matter, but there seems to be something sorely missing from conversation as a result.

Mirror, mirror, on the wall…
Sadly, when held up to Gray Matter, Black Mirror III pales in comparison on many accounts. Whereas the former successfully managed to update the point-and-click genre whilst still sticking to its roots, the latter’s uninspiring visuals, lack of voice acting, and inability to offer a consistently entertaining experience leave it acutely outdated. A mildly interesting story and some enjoyable highlights salvage it, meaning that it’s not a bad purchase for the real point-and-click fanatics out there.