Burnout is one of the most successful racing franchises of the modern era, offering players a high octane, high adrenaline experience across all platforms since 2001. One of the things a lot of us loved about the series was the Crash mode. You actually got points for doing damage, meaning you could spend your time targeting the other vehicles rather than trying to avoid them.

The Crash mode has been so successful over time that this September, Criterion Games decided to release it as a game in its own right to XBLA and PSN, and I have been spending my time creating some havoc. The question is, will it Crash?

Drive on
Let me make one thing perfectly clear right from the off: anyone hoping for some of the high adrenaline racing that the Burnout series is famous for needs to pick up their controller and go elsewhere, as Burnout Crash is actually more of a puzzle game than a driving sim.

Rather than hare around the streets at break-neck speeds overtaking your rivals in a bid to reach the chequered flag first, what you do here is drive up to a junction and straight into another vehicle, to try and cause as much damage as you possibly can. Damage earns you cash, and cash earns you bragging rights over your mates. 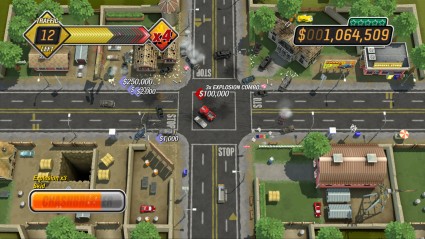 Crash and burn
There are three Crash types on offer, starting with the standard Road Trip where you simply start the crash, and then use the Crashbreaker button (A) to trigger more collisions and explosions. Each crashed vehicle adds to your crash meter, and when you reach a certain number a special feature is launched.

The special features include things like a bulldozer, that is difficult to stop and clears a path through the crash you have built up, or taxis that give a big cash bonus if destroyed. A Crash is over if five vehicles manage to avoid the carnage and get out of the area, or you unleash the ‘super feature’. This is a massive screen-clearing smart-bomb type of affair that could be a tidal wave or a UFO, for example, and its power will vary depending on how many cars have got through.

Rush Hour is more or less the same, but you have a 90-second time limit to create havoc. At the end of this your car explodes and sets fire to anything nearby, which might then catch something else, causing a massive end-of-crash combo. This mode doesn’t give you the same special features as such, but you will get bonus vehicles come through. There’s a pizza truck which, if destroyed, gives you the ‘pizza wheel of fortune’ to get one of the special features and boost your score, and cash trucks that you must break open to get the swag.

The final Crash type is Pile Up, which gives you a limited amount of traffic to work with, and the level ends when all the traffic has gone. At the end you get an inferno, which sets fire to anything nearby. When the fire goes out you have a few seconds to trigger another fire, or it’s crash over. 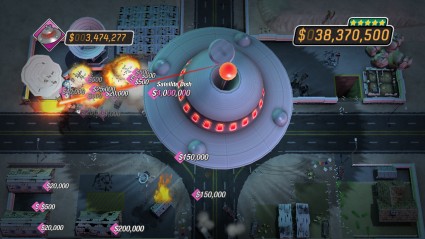 Where's Mulder when you need him?

Each Crash has many options for score multipliers and combos, and you are awarded a star for triggering specific targets. This might be to pass a certain score, destroy a particular building or cause a specific event. Each intersection has a pit to try and ricochet cars down for skill shots, for example, and three sports cars, a gold car, or boats to destroy for extra cash bonuses.

At the start of the game you will only have a couple of vehicles and levels to choose from; gaining a single star on the Road Trip level will unlock the Rush Hour and Pile Up levels on the same area, as well as the next Road Trip section, with further sections needing a certain amount of total stars to access.

Stars will also unlock additional vehicles, which give you different levels of strength and aftertouch. Strength relates to the damage you may cause, while aftertouch is how far you can move with the Crashbreaker activated. Vehicles range from the light and agile buggy known as the ‘Dust Storm’, to the ultimate destroyer, a dumptruck called the ‘Trashmaster’ which makes up for poor aftertouch by being able to put holes in buildings.

Explosive visuals
Burnout Crash has an appealing graphical style that begins in the menus. These are presented in a way that reminded me of a greasy spoon café or truck-stop, with items highlighted in neon and road signs in the background. The pre-game presentation is very cartoony, which follows into the maps themselves and seems to give the game an extra air of fun. 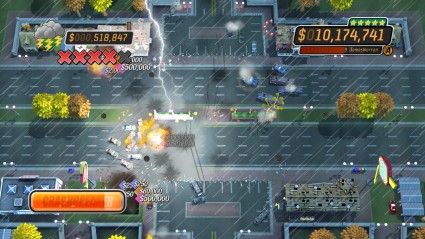 The view in the map is quite high above and south of the main intersection, and doesn’t really move once you get going. This means everything is quite small, which can be both a blessing and a frustration. You can occasionally miss the secrets as they are hidden behind the huge score counter, but at least you can usually see the special items coming well in advance to time your attack.

The levels themselves are well drawn, but despite being across a variety of areas such as a UFO base, an airport and a university, they are all very similar. They have an almost identical layout, with merely some different shading to the buildings and backgrounds. Crashes and super features are all animated nicely enough, but overall it’s pretty basic.

Crash, bang, wallop
Within the main menu and at key points throughout the action, you will hear one of a very small number of old-school records blaring out from your TV. These are used to signify specific events, such as ‘Dr Beat’ by Miami Sound Machine when an ambulance is on its way, or ‘Gold’ by Spandau Ballet when you hit the level’s gold car. Initially I quite enjoyed these very retro sound bites, but after about an hour of play it’s safe to say I’d had enough. There is some additional voiceover from your commentator to give you the odd pointer, and also a radio that comes in every level as you build up the traffic, with some very random offerings (one sounded like Dr Claw from Inspector Gadget).

The sound effects are pretty good if a little basic, with crashes and explosions going off right, left and centre, and with each new combo your cash score chimes over to what seems to be a mix of a cash register and a fruit machine. It’s hardly ground breaking, but it does the job well enough. 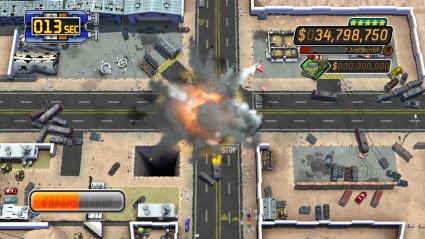 Multi-car pile up
Although there is no dedicated online mode for Crash, what you do have is a solid leaderboard system that quickly and easily lets you compare your scores on any track, and over each Crash type, against your friends.

In addition to the leaderboards, there are two turn-based options. ‘Autolog recommends’ advises you of a level where a friend has outscored you and challenges you to beat it. On the other hand, ‘Challenges’ allows you to choose any of the levels you have unlocked on any of the three Crash types, and give you one shot at posting an unbeatable score. The game then passes the challenge to your pal when they next launch the game, to see if they can beat you.

It’s not quite a head-to-head battle, but the potential is certainly there to add a touch of longevity, as you pass some trash-talk back and forth between your mates when they fail to match your challenge.

Pile up or Pile of?
Burnout: Crash is a thoroughly enjoyable experience, while it lasts. Unfortunately, that is just not long enough. I managed to see everything the game had to offer in around four hours of play time, unlocking and playing all the levels and with all the vehicles. In addition to this, the game can get very repetitive, as the levels literally blur into one in a matter of minutes, and the musical clips repeat about ten times a level.

However, despite the speed at which you get to the end and the relative repetitive nature of the game, there is a fair bit of replay value. The star system, along with the challenges and leaderboards, give you the option and incentive to try and outdo your mates. At 800MP it won’t break the bank and is certainly worth a look.