As I’m sure you’ve heard already, Child of Eden is an experience. It’s not a game in the traditional sense of the word, more an interactive, musical kaleidoscope. It’s a bold, ambitious new IP, and one that takes a great deal of risks in a market saturated by action and adventure.

Undoubtedly, Child of Eden offers something truly unique, and allows you to experience Kinect in new, exciting ways. The burning question, as always; is it worth your investment?

For those that may not know, Child of Eden is a prequel to Rez, created by Tetsuya Mizuguchi. Rez was a beloved Dreamcast classic, which has also been ported onto Xbox Live Arcade in recent years.

This new game sees you playing with either a standard controller or Kinect, as you are tasked with destroying various flying targets, which produce melodic sounds when destroyed. As such, the sound is just as integral to the game as its psychedelic graphical style.

It also comes together with a unique plot that could have only come from Japan. In September 2010, a child by the name of Lumi was born in Space. At first, she was captivated by its beauty, taken by its far-reaching scope, but soon found herself longing to experience the same beauty on Earth. Unable to reach it, however, she started to send messages to Earth’s population through the medium of song. Unfortunately, despite her pure intentions, Lumi never got to touch Earth. 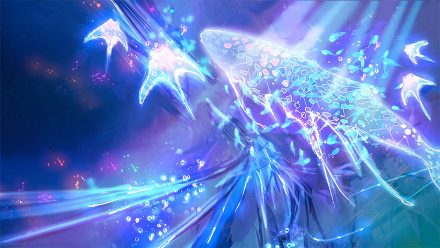 It's like a trance music video. It's either this sort of thing, or people running...

Unable to thrive or exist in space, she shortly died. Yet, her memory lived on through the internet after her body was preserved and all her memories and data were recorded and archived. This was only the beginning, however. Inspired by this, more humans began to explore space, each of them realizing the need to archive their own history onto the internet. Thus, Eden was born.

Time progresses and in the 23rd century, Scientists embark on a new experiment called Project Lumi. The focus of the experiment is to recreate Lumi’s persona from the archives of Eden. The experiment is a success and finally, scientists will be able to see new perspectives of space. However, upon awakening, Lumi is quickly under threat by viruses attacking Eden. It is your goal to save Eden and Lumi before the viruses corrupt everything.

Ooo-la-la
When playing Eden, you’ll feel that words can barely convey what it is you’re seeing. Wacky plot aside, this is truly something new and groundbreaking. Mechanically, this is just an on-rails shooter, and yet it couldn’t feel more alien and far-removed from that stigma if it tried.

As I alluded to before, you can use Kinect to navigate the experience, with your hands dictating the action on-screen. You alternate between the two primary weapons, with the most-used being the homing missiles assigned to your right hand. With this, you paint targets over multiple enemies, before flicking your hand forward to fire. By switching to your left hand and just pointing at the screen, you produce a steady stream of less-damaging bullets, perfect for taking out enemy projectiles, and for some reason is highly effective against purple coloured enemies. You can only do one at a time, but you feel in real control of the action using Kinect in this way.

If you don’t like that system of having a weapon assigned to either hand, you can change it so that you can switch between the two weapons by clapping your hands together, although the default is the easiest to get to grips with.

To help you along, you can collect Euphoria bombs, which are activated by raising both your hands above your head, helping to clear the screen. The problem with this is that your hands also move the camera, so you can get easily disorientated in the process. A minor gripe in the scheme of things. 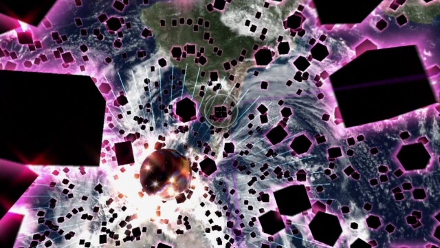 Rorschach test time! It's a butterfly or a penis!

Health is managed via a five petalled flower in the bottom right. As you take damage, the segments deplete, but luckily you can refill them by shooting at blue spheres that occasionally enter the screen.

The enemies themselves are forms of computer viruses, and destroying each entity creates a sound that fits in with the overlaying soundtrack. By destroying these beings to the timing of the background music, it not only sounds awesome and engrosses you in the experience, but you will also gain additional points.

There are five levels in total, each of which is very visually different from the other. The levels are replayable at any time and will actually change each time you play, depending on the player’s style and performance previously. The levels are Matrix, Evolution, Beauty, Passion and Journey.

As I mentioned above, you can also use the normal Xbox pad to navigate the experience, and even if you don’t have Kinect, I would still strongly advise that you consider playing Eden, as the game still plays equally brilliantly.

Like a shooting star…
The graphics are a showcase feature for the game, and are very faithful to the look of Rez HD. There’s no real way to describe what it is you’re seeing, the enemies are just aspects of a virus that fluctuate from wriggling worms, to flying dots, all set against an environment which combines the innards of a computer and outer space. 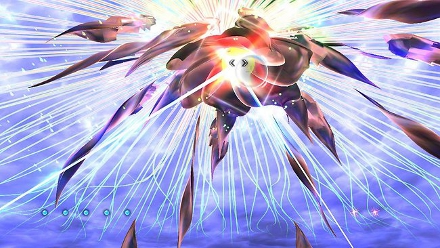 It’s a game that can inspire you as you play, enable you to think of things that have been stuck at the back of your mind, or take you to a calming place if you’ve had a stressful day. It can be anything you want it to be, and that makes it unlike any other game out there right now. The effects are very reminiscent of something you would see in a club playing trance music, but to just pass them off as such would cheapen the vision realised here.

When coupled with the story, what you have is a thriving world, empowered by music, and a level of emotion that can be attributed to Lumi’s desire to reach the people of Earth with her voice. It also helps you see something in yourself, and your own desires to communicate with the people you live alongside day-to-day. There’s so much to identify with here, but there’s also a lot of personal discovery.

In terms of how much it tantalises the senses and immerses you into a creative plain, the gaming experience of Child of Eden is unique, and will be a very personal playthrough for you, in ways you cannot articulate and convey to others.

Skullcandy
The music in Child of Eden has been created by Genki Rockets, who worked on the soundtrack of No More Heroes, and their efforts here are very trance-based in style. So involved were Genki Rockets in the project, that the lead singer of the group is actually playing the role of Lumi. They even created two brand new tracks exclusively for this game. 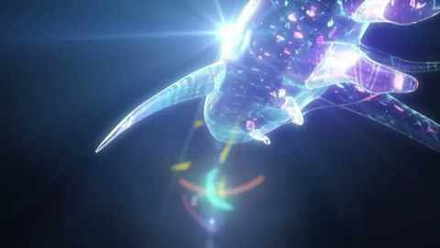 Naturally, with a game like Eden, the music is as important, if not the most important element of the game. It essentially dictates how you play. The background music is there for you to follow and you’re effectively conducting how the beats weave into the symphony.

Heck, when you’re playing with Kinect, it’s sometimes hard to keep the gestures working, because you’ll find your feet screaming that they want to move and dance to the beat. It makes me wonder how the lovechild of Child of Eden and Dance Central would play out on Kinect?

Save the last dance
Eden mesmerized me. It froze my soul in my skin and filled me with pure joy, something no other game on Kinect has been able to accomplish. You may never play this game; you may ignore its existence completely, so my words will ultimately mean nothing to you. Yet, I say, with no qualms or concerns, Child of Eden is as inspiring an interactive experience as Xbox 360 has ever seen.

If you want to take a chance of something new, if you want a break from the slog, grind and collect nature that games have adopted in last few years, Child of Eden will promise you something different. It is truly beautiful.