Double Fine Studios are one of the most underated developers out there and it’s certainly not from a lack of trying. Since their inception, they have produced a small but quality filled catalogue of games, yet continue to meet limited commercial success. You may have heard talk of a game called Psychonauts or last year’s Brutal Legend, both of which brought something different to the table, both of which are adored by respective fanbases, both of which just about made enough for a return on the game but made hardly any profit. This is part of the reason Tim Schafer’s team decided to adopt a new marketing strategy, splitting their teams up to work on smaller games and opting to release downloadable produce instead of a boxed, retail copy.

Costume Quest is their first effort in this new campaign. Will this merit the success story they’ve been looking for?

Reynold and Wren are twins and have just moved to a new town with their parents, just in time for Halloween. As the surroundings are new, their mother tells the children to go out, play and make new friends with other children in the neighbourhood. After the children start bickering over who is the most responsible, the mother (controlled by you) appoints one of the children as the leader to bring the other in line while they go out to ‘trick or treat’. You decide which twin you wish to play as and then the game starts with the children in their respective roles and costumes. The two twins start their evening trick or treating houses, begging for candy, and meeting new faces in the neighbourhood, just like their mother told them to. They keep this up until they reach one house and the door opens on them, revealing a horrifying monster. With the twins caught off guard, the monster snatches your sibling and takes them past a menacing black gate that has spawned in the town, casting them out of your reach. Frightened but driven by rage, it is now the job of your chosen sibling to get back your twin back from these horrid ‘Trick or Treating’ Monsters and find out what lies past the black gate.

Is this game too creepy to play?
Costume Quest is reminiscent of the Final Fantasy games of old (pre VII) but also has a World of Warcraft style of exploration, making it somewhat of an Adventure Role Playing Game. The quests are done in a WoW style where multiple quests can be open at the same time and you can complete them at different times depending on how you feel. You can even skip quests if you so desire, but the more you complete, the more XP you’ll gain. Talking to NPC’s is quite vital in the game as they’ll unveil the side missions and give you key information about your quest. As Reynold or Wren, you’ll run around exploring the town with a costume equipped (you start the game as a robot with a boosting technique but will gain other costumes as the game progresses) gathering quests, talking to people and collecting candy. As you move through the story, you’ll also gain blueprints for other costumes and will need to collect the parts, whether it is from people or finding them in chests, in order to build the costume and be able to wear it for use within the game. You’ll also need to build new costumes to access some areas of the game, for example the robot costume is made of cardboard, so you’ll need to find something more sturdy in order for you to pass through water. 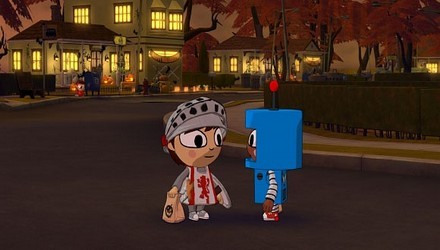 Costumes of all shapes and sizes

When you bump into an enemy in the World, whether they are behind one of the doors you’re trick or treating or just randomly in the neighbourhood, you’ll then enter a turn based battle, introducing you to the Final Fantasy style of play. The children transform into a larger version of the costume and use their abilities to fight the monsters. This plays exactly the same as every other TBS game you’ve played in the past, you’ll be in control of your fighting party, each dressed in different costumes, each with different abilities and you’ll need to press a button for a main attack and a button to defend yourself from oncoming attacks. In order to increase the effectiveness of your attack, you’ll need to tap the corresponding button when it flashes up on the screen in a quick time event. If you fail to do so, you’ll still hit the enemy but with less power. When you win the battle, you’re given experience points which will contribute to your character levelling up, increasing their health, defense capabilities and attack power. If you lose, you’ll have to start over.

Some battles may prove more difficult than others, that’s why the game has Battle Cards which you’ll need to purchase to survive in Costume Quest. As the game is set at Halloween, aptly, candy is currency in Costume Quest and can be obtained by hitting things in the World, by performing tasks for other people or by trick or treating. Once you have enough, you can then visit the Battle Card trader and purchase them for use in combat. Battle Cards essentially add attributes to each character. Whether that be increasing the character’s health, increasing attack power, or counter-attacking once there has been a successful parry or dodge.

It’s beginning to look a lot like… Halloween!
Costume Quest is a cutesy looking game but with a darkened cartoony edge (think a hint of Coraline with a side serving of Naruto and a dollop of Psychonauts). The graphics aren’t of as high a level as that of Psychonauts or Brutal Legend but they completely serve the game’s purpose, keeping it very topical as pertains to Halloween. The game’s development was headed by Tasha Harris who used to work for Pixar, who also coordinated the art direction for the game. She’s definitely got her finger on the pulse with Costume Quest as it resonates with everything a game of this type should and is entirely suited to the festival of which it draws most influence. With the battle sequences featured in the game and the ideology driving the game, it really feels as if you’re getting a glimpse into a child’s imagination whilst on Halloween, seeing what they see and living the day under their guise. 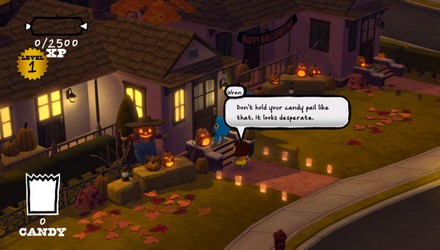 The text can be a little difficult on the eyes if your TV is small in size and this does detract from the experience a bit, especially since there are no voice overs. Also, when detailing quests, the journal looks convoluted and seems to lack a sense of order, although this could be attributed to the fact that the journal is meant to represent a personalised diary by the child and so is meant to look as if he or she is just scribbling down notes. Still, when trying to play the game, it takes a while to get used to what you’re actually looking at. I also found a lack of a map can sometimes make you wander around aimlessly and be frustrating when you’re trying to gather your bearings as some areas of the town seem to look the same after a while and you can quickly find yourself baffled.

They’re creepy and they’re cooky, mysterious and spooky…
The music is also Halloween themed and is quite well scored for the most part. Most of the melodies are stuck on loop in the background and can become a little stale and irritating after a while, but never to the point where you’re ripping off your ears in agitation. They’re quite enjoyable and you can sometimes find yourself humming along to them (voluntarily or not). It really does help throw you into the Halloween spirit and synchronises amicably with the game’s graphical vision. Just don’t expect symphonical genius of a b-movie standard and you’ll be smiling.

Worth carving a pumpkin for?
I was apprehensive and slightly dejected that Double Fine decided to commit their full resources to Arcade Marketplace’s, disappointed that after the bombing of Psychonauts and Brutal Legend, the studio decided to change their strategy. However, if the quality of Costume Quest is what we’re going to come to expect from Double Fine, then I’m 100% behind this venture, especially since Ron Gilbert has also reunited with Schafer to create more gaming brilliance. Costume Quest has this unashamed, unassuming way of lodging itself in your memory long after you’re finished playing. In a sense it may be clichéd to say seeing as the game is set on Halloween, but the game really does haunt you. Whilst preparing a meal or sat waiting in-between matches on Reach, I found myself thinking about Costume Quest’s charming characters and the tongue in cheek dialogue, really wanting to see how the story progresses. I can quite honestly say, there aren’t many games this year or in the last few years that have tormented me in such a way. In that regard, Tim Schafer and Double Fine have worked their magic and managed to totally and utterly engage me from the get-go.

Frankly, Costume Quest is one of the most addictive, fun and enjoyable games I’ve played on the Marketplace in a long time, to the point where it has taken precedence over full feature retail releases and forced me to put them on the back-burner. At a bargain rate, you cannot and should not resist this game. Slight blemishes and hiccups aside, this one is definitely not just for Halloween!