If you know anything about the existence of Rube Goldberg, then you are pretty much on track for understanding the premise of Crazy Machines Elements. If not, then it can be rather simply explained. Imagine you want to make a cup of tea (a simple task I understand) but instead of just boiling the kettle, you construct an apparatus to do so. One that sets fire to a towel, which in turn acts like a fuse and lights a puddle of petrol on the ground, which then goes over to the wooden table and catches fire, causing the kettle to boil!

Basically, your task is to figure out the missing parts of these kinds of machines, to help them perform certain tasks. Now, if you thought my explanation of a Rube Goldberg machine was slightly over the top, just wait until I tell you what sort of madness Crazy Machines Elements produces.

The game is actually a new title in the Crazy Machines series, which was a reasonably successful physics-based puzzle title in the 90’s, and again in the 00’s. In all honesty I had never actually heard of the franchise, but this is more than likely due to it being a PC series; I was mostly a console kid. However, the newest outing has made its way onto Xbox Live Arcade, which is bringing it to a whole new audience for the first time.

These are for science!
There are three different game-types to choose from: puzzles, challenges and editor. The puzzles section is the main part of the game, taking you through a bunch of differently styled levels. For the most part, the first few sections are designed to teach you how to use the items, and what sort of effect weather will have on the outcome of your machine.

The gameplay, as I explained a little earlier, is an exercise in obtuse thinking. When you start a level, you will already have some items on the screen, so along with using the other items you have in your inventory, you have to make the machine work. You can start the device up or stop it from working, which is a great help in seeing how the level reacts. As you make progress through the puzzles, things get pretty tough, pretty quick. So instead of having a couple of items to work with, you might have five or six. At this point my mind was nearly melting with the amount of heat my brain was producing, just trying to work this stuff out.

The challenges are pretty self explanatory. You are given a select outcome to a level, and rather than there being any set up for it, this time you can use any of the items from the game to make it happen. I appreciate the freedom that this gives you, but I find that without the hand-holding that I was getting used to with the main puzzles, it can be difficult to come up with a working solution. Maybe this is just down to over-thinking on my part, but you have to forgive me for that; this is a game about making things as absurd as possible.

The final mode is the editor. This is where all of the real madness happens, making all of the items available for you to monkey around with. I had a lot of fun just placing random objects and watching how they would react with each other, which is great, but to make your level complete you have to iron out the end criteria. This is the part I didn’t enjoy as much; coincidentally it is the logic part of the game. I had a much better time creating aimless machines than I did creating something with a purpose, which I can only imagine is what it feels like to be that kid that gets easily distracted… it’s fun to make the fireworks explode.

The one real let-down in the editor is that you can’t upload your creations for other people to try. Having an ability to download infinite amounts of new levels would really help the lifespan of the game, but at the same time I would imagine it would make it harder for them to sell new downloadable content. Not that there have been any announcements in regards to new content. 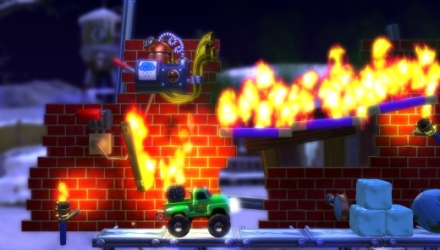 Make it better with fire

So this is what madness looks like
I have never been a fan of ultra-realistic graphics in games. It does look pretty, and it can be quite incredible to see how life-like things get, but for me it’s all about style. This game has it in spades, with its cartoony visuals and ability to make everything seem like a toy. The colour palette is excellent, perfectly complimenting the feel and purpose of the game. It’s all about exploration and having fun, and you can understand that by just looking at it.

Elemental orchestra
Much like the visual style, the sound effects are cartoony and exaggerated, which understandably fits in very well with the theme of the game. The music, however, is one of the parts I don’t really know how to take. I understand that when you have a game which can cause frustration, it’s better to have a nice peaceful track list to let all of your troubles melt away. The music is often like that, but at times it has a very serious tone. Whereas I don’t necessarily dislike this, it does seem out of place stylistically with the rest of the game. 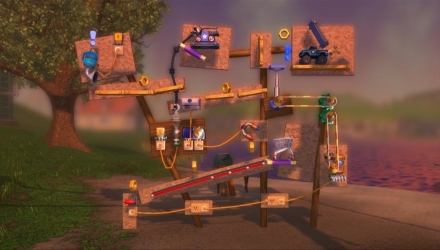 You know, I think I learned something!
Playing this game can be both a tremendously satisfying experience, and a rage inducing one, all at the same time. I had a blast with the first thirty levels or so, challenging my ability to connect the dots and keeping me on my toes. Then I realised that those were essentially the tutorials for the game, and that the real challenge was still to come. The learning curve is steep, and you had better hope you have something soft to throw your controller into (either that or a spare control), because I haven’t felt this infuriated by a game since Super Meat Boy.

That’s enough with the negatives though, because what you have here is a lot of fun, with a lot of content and an amazing ability to make you feel like the king of the world when you get things right. I think if you like puzzle games, then this game is a must have for you, but if you are unsure and worry about not being able to progress far enough to make the cost worth it, then maybe you should get hold of the demo first. For 800 Microsoft points though, this game is a bargain. It saddens me to have to say this, but when it comes to a product this niche you are probably going to have to: