If you’ve never genuinely believed that cutting a piece of rope could be fun, then you’ll probably never want to drink pints with Zeptolabs, as they’ve made a whole game about it. It’s also worth me mentioning that, next to Angry Birds, it has become the most popular game on iOS devices. So, rope-cut hater, you’re in the minority.

Being a curious individual, and slightly perplexed by this phenomenon, I decided to take a look for myself

Several hours later…
Monsters love candy
So, there are two main rules to bear in mind before playing Cut the Rope. One, cutting ropes is fun. As much fun as going to a park and swinging on the swings, or cartwheeling in your front room, or paragliding.

The second rule is that monsters eat candy. Don’t try to contradict me, or call me a liar. I’ve learned from my ignorance after playing this game, and I won’t have anyone tell me otherwise.

Once you’ve got those core ideals in mind, then you can get the party started.

Cut the Rope takes place inside a box, and there are 9 different types of boxes to choose from (from cardboard to Toy boxes). Within each box are 24 areas to get through. The concept is the same throughout, however. There is a hungry monster inside who has noticed a piece of candy dangling from a piece of rope, and it’s up to you to feed him. Within each box, there are different types of contraptions, gadgets and gizmos that can help or hinder the candy’s progress to the monster’s stomach, and you will need to learn and master each to achieve one candy’s destiny toward digestion.

Muffin > Cookie
Cut the Rope is simply controlled by swiping your finger across a piece of rope to cut it. If candy was attached to that rope, gravity will then take its course and send it plummeting towards the bottom of the screen. However, as I alluded to, some levels have different elements to them. For example, one level sees your candy getting trapped in a bubble, and has it floating towards the top of the screen. There are also several other ways for the candy to navigate the screen without it disappearing into the ether.

On each level, there are three stars which you can collect, and you will need to collect a certain amount of stars to progress to the next box. However, if one level is particularly tricky, you can skip past the stars, and then try your luck with another stage. Although, bear in mind, there are additional benefits to collecting these stars, such as increasing your score, and earning Game Centre achievements. If you’re a bit of a completionist, then I offer you a word of caution; on later levels, the appearance of the stars on the screen will be timed, and in order to collect them, you will need to fly through some levels faster than normal. This can present some problems… 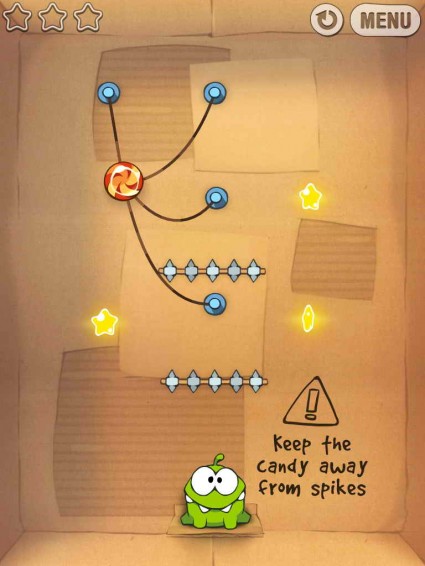 If you’re like me, collecting stars will become a bit of an obsession, and, as you play more of the game, you will need to remember all the functions of the various contraptions. As a result, on some levels, there is too much you need to multi-touch for, and precision can become a nuisance.

For example, on one level you will have to tap the screen to burst the bubble your candy is in, but you will also need to cut the rope your candy is attached to, while at the same time, operate a crane-like device which moves the rope to different positions on the screen. All of this needs to happen within a very small portion of the screen, and if you’re trying to catch a star that is about to disappear, you will easily get frustrated. Naturally, the further up the levels you go, the more difficult it gets, but some of that frustration is definitely down to the control scheme, which can definitely cause you to grow a few gray hairs!

Nom Nom the Mon Mon
The comic book, cartoon graphic style of the game is really endearing, with the big-eyed green monster being the star of the show. His adorable obsession with food is charming, but equally exasperating. Especially when you’re trying to navigate the candy through a particularly tumultuous course and all he is doing is pointing towards his mouth. Then, just when you feel off put, you accidentally drop the candy out of the screen, and instantly notice the sadness on his face. At which point, your heart melts, and the need to try again suddenly becomes very strong.

Although, I have to say, it’s rather entertaining dangling a piece of candy right in front of a monsters face, his mouth wide open desperate to wrap his chops around it, and it’s completely up to you when you decide to let the candy drop. It’s an odd, but real moment of satisfaction.

There are some clever additions to the game as well, like the ability to change the type of food that is used, whether it’s a doughnut, an iced cake or a sweet. You can also collect some hand-drawings which are unlocked by performing set requirements within the game.

Cut the Rope got symphony
If I was to describe the music of Cut the Rope, I’d say that it was like a full orchestra doing live performances of the music of the Simpsons. It’s always very upbeat, and very befitting of a cartoon style. The tunes generally work well as background noise, and never seem overly annoying or distracting. A great job done here.

Cut the cord?
Despite some control difficulties, Cut the Rope is an absolute hit. With an incredibly high replay value, vast amounts of content and very addictive gameplay mechanics, there are very few iOS games out there that can match this level of quality. You’ll never want to feed a monster more.