The games market is well and truly oversaturated with music and rhythm games nowadays, with Activision contributing to the vast majority of those. To be honest, aren’t we all finding that it’s getting rather boring? Unrelenting as they are, Activision are back with another music game and seem to be on a bit of a strange crusade to prove that you can never have too many plastic peripherals in your home. Thankfully DJ Hero, developed by FreeStyleGames is a music game that stands out against what is fast becoming a mediocrity of ‘band’ games in Activition’s stable.

Flash is back, Flash is back!
Little known fact; I DJ’d for ten years, playing house and other underground dance music, so when Activision announced the inevitable DJ Hero I was a little apprehensive. I mean, there are so many facets to DJing, so many genres and styles to cover, I didn’t think it would be possible. Would they be focusing on what I knew to be DJing? Seamlessly linking one track into another to entertain folk on a night out? It wouldn’t make a fun game, and how would they manage to fit in the required tracks to make that worthwhile?

There was one facet I hadn’t thought about and it’s the most creative one; scratch DJing. More specifically the type that a personal hero of mine, Grandmaster Flash, helped start back in the 70’s. Back then, the likes of Flash, Mellie Mel, and Grand Wizard Theodore would take existing tracks and mix them up with other records to create something new; that is the basis of DJ Hero. 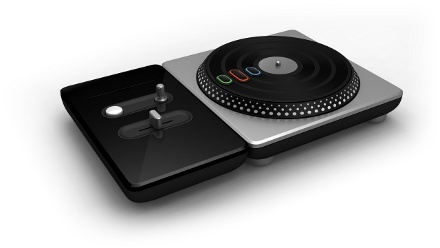 Should be called ‘Sample Hero’
Ok, so the game does use a turntable controller, but DJ Hero is far more about the manipulation of samples rather than the actual art of DJing. The turntable platter comes equipped with three buttons. The green is for the left hand channel, the blue for the right, and the red controls different samples from either or unrelated tracks. Similar to other music games you are required to press the right buttons as indicated when the icons scroll down the screen, however rather than acting as notes as you would find in Guitar Hero, these buttons actually control the cue points for the records (where the track will start when you press it).

That aspect in itself will sound pretty easy to music game maestros, however once you throw the cross-fade, scratching and effects into the mix it becomes an entirely new ball game. Scratching is controlled when one of the channels throws a big block at you with directional arrows. For difficulties up to medium, all you need to do is a constant back and forth motion, go higher in difficulty and it becomes a lot more complicated; more on that shortly. The cross-fade involves simply switching to one track on its own, and is represented on screen when the either the left or right channel cuts to the far left or right. You will also notice that there are times when the channels will pulsate, here you can use filter effects by turning the effects knob back and forth and this will double your score multiplier while doing so. There are also ‘freestyle effects’, in which using the red button you can lay down short samples over the mixes.

So, what about ‘star power’? Here it’s called ‘euphoria’ and just like in other music games you will encounter glowing sections that should you perfect will give you the option to double your multiplier. There are three tiers of this you can earn and you can use them at any time; it’s activated by a big button on the mixer that glows read when available. The last trick available is the rewind. Chain together a large part of the track and you will earn this option, which allows you to spin the record back to repeat sections of the track to help earn the really high scores. Each individual aspect of the game when described like this probably makes it sound like a doddle, but it’s really anything but.

The difficulty levels have a large factor in keeping the game challenging and there are five on offer for people to ease their way into playing. Beginner requires no button coordination in that you can press any button and only have to worry about occasional and minor scratching. Easy brings the colour matching back in, but you don’t have to worry about the cross-fade still. Normal gives you access to everything and is probably the optimal level that your average gamer will want to jump into. Being somewhat familiar with mixing and scratching in my past I did find some of the tracks really easy, but even on this level some of the later tracks are extremely difficult to five-star. Hard eases you into the idea of ‘directional scratching’ as there are moments when you’ll be required to scratch once or twice a specific amount of times in a certain rhythm, and it’s here where the game is closest to the art-form it aims to mimic. Expert takes everything you know already and ramps it up to an insane degree.

Aside from the difficulty levels there is actually no way to ‘fail’ a mix, which removes some of the challenge aspect for me but it’s traded off against the drive to unlock everything. As you play through the game you get your typical one-to-five star rating. The more stars you unlock, the more things you get access to, such as new DJs to play as or venues to spin your tracks at. It does motivate you to go back and better yourself, but for non-completionists it would probably withdraw some of the replay value.

There are two track lists that feature the DJ playing alongside a guitarist and in these moments you can allow a friend to join in on guitar. I don’t think this will be a widely used feature, but it’s a nice option to have should you suddenly have mates around. 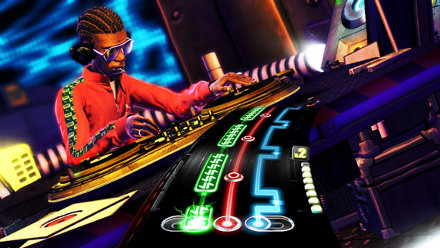 Familiar territory
People are likely to find no surprises here in DJ Hero as visually the game is rather typical of the ‘Hero’ games. The only real difference comes in the types of venues you will use and the characters you have access to. There are a number of made up DJ’s similar that you have access to use from the off, and as you progress through the game you’ll unlock the likes of Grandmaster Flash and Daft Punk, all of which are modeled nicely with a cartoony look to them.

Choice cuts
I’m going to just put this right out there; DJ Hero has the most enjoyable soundtrack of any music game I’ve played to date. The beauty I find in these types of games is that I get to experience a new type of music I might not usually listen to, and this is no different. Not only does it help you experience a wide selection of genres from rock, dance, pop and hip-hop, it allows you to do it in an entirely new way. Some of the mixes are completely ridiculous in theory, such as ‘Ice Ice Baby’ mixed with Paula Abdul ‘s ‘Straight Up’, but for most part they work well, with only a few mixes being less desirable to experience than the others. The fact that the likes of DJ Shadow, the Scratch Perverts and Daft Punk have all put their names and likeness to this project says it all. You can find the full track-list here.

There’s not much in the way of other real sound features, though the inclusion of Grandmaster Flash as your tutor in the training levels is a masterstroke, and it’s all very well produced.

DJ Battles
DJ Hero includes a very basic, but very playable online mode. Players can engage in simple one vs one battles that work pretty smoothly. There was no lag noted in the few games I’ve played, but a lack of modes really hurts the experience. In Guitar Hero’s online features there is a mode that let players alternate between different sections of the songs, or allowed them to hinder the other person, and these modes would have been perfect on a DJ based set-up; an odd omission to an otherwise stable online component.

Rock DJ!
DJ Hero is a much-needed breath of fresh air in the current music game market, however people bored of the genre might be more difficult to win over than I was. The price-point in this financial market is always going to be an issue for some, but if you feel you still have room for more music games in your collection and want something a little different, then DJ Hero is absolutely the game you are looking for.