1994 was a bad year. Fred West’s house was excavated, Kurt Cobain killed himself and Ayrton Senna was killed during an accident at the San Marino Grand Prix. In fact if you look at all of that year you will see that there was probably little to celebrate. Saying that, one thing that was definitely worth celebrating about was the release of Shiny Entertainment’s Earthworm Jim. This side-scrolling platform game had everything; class, charm and style and was well received around the world.

Some of you reading this will probably think I have gone mad, and want to know what’s so interesting about an earthworm. Well the simple answer is this, Earthworm Jim raised the bar in games. It was praised heavily upon release, with Gamesmaster magazine gave it a whopping score of 100% (it was the first time they had awarded a game 100%) and one of the few classics that has been remade several times over the years. Speaking of remakes, the latest incarnation has been brought forward to XBLA and I couldn’t wait to get my hands on it. After all, what could be better than playing a classic in HD.

Grooooovy!
Jim (a very ordinary earthworm) is just minding his business, when out of nowhere a special spacesuit made by Professor Monkey-for-a-Head is dropped from space by a rebel spaceship pilot who is being chased by Psy-Crow. After a stroke of luck Jim lands in the collar of the spacesuit which in turn mutates him into a large intelligent earthworm. The Ultra-High-Tech-Indestructable-Super-Space-Cyber-Suit had been commissioned by Queen Pulsating, Bloated, Festering, Sweaty, Pus-filled, Malformed, Slug-For-a-Butt (seriously that’s her name, I couldn’t make this stuff up) so she could conquer the galaxy.

After hearing Psy-Crow talking to Queen Slug-for-a-butt about plans for her sister Princess Whats-Her-Name (honestly, I have not dropped LSD), Jim sets off in the spacesuit to rescue the Princess and bring an end to the Queens awful reign.

I just launched a cow!
Earthwork Jim is a 2D side-scrolling platform game. Just to patronise you, I get to tell you that the aim of the game is navigate through the levels killing enemies with an assortment of weapons and abilities. Jim has quite a number of abilities at his disposal, which the sheer number of was totally original in ’94. These were totally unique too, such as using Jim’s worm body as a whip to swing across hooks or making his head spin to glide across large gaps. There are some great power-ups to compliment Jim’s trusty blaster, which really help against some of the harder enemies. His health is managed by a percentage meter, and it’s highly important that you keep collecting the health orbs scattered all over the levels, otherwise you’ll find yourself worm-food (sorry!) in no time.

Another thing that Earthworm Jim was famed for, was great variety on gameplay. For example; at one point you have to navigate an underwater area in a glass bowl submarine (not as easy as it sounds) taking care to not knock the glass too many times so you don’t drown. You also have to take on an enemy several times in an extreme bungee jumping competition. Throughout the levels you will also be attacked by some truly original bosses. These can vary in difficulty and you usually have to work out a particular trick to defeat them. After each level you enter into a mini-game set in a 2.5D environment you have to race Psy-Crow. If you win you go on to the next level, and if you lose you have to fight Psi-Crow in a one on one battle; a set-up similar to the sonic 3D bonus rounds.

Not everything about this classic platformer has passed the test of time. While most of the game mechanics seem to still work fine (how could they not?), little things, such as the game registering when your whip hits a hook can be fairly finicky and can lead to some very frustrating moments. That was the theme of the game back in the day. It was devilishly difficult and frustrating as hell when you got stuck, but fun as hell once you knew how to approach things. Thankfully, to make the game a little more accessible to everyone there are a variety of difficulty settings, the hardest seemingly called ‘Original’, which should give some of the young whipper-snappers an idea of how difficult games used to be back in the day…

The level design is quite frankly, nuts. This isn’t s simple case of going from left to right, but you’ll be traversing in all manner of directions to reach the end of an area. Included in this HD version are a number of totally new bonus levels, which all fit in to the Earthworm Jim ethos pretty much effortlessly. 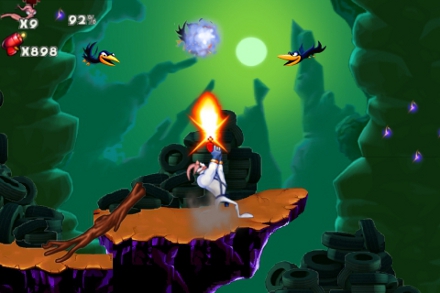 What a random place for a moose.
It’s hard to make a game that was originally released over a decade and a half ago to look better, but Earthworm Jim has been redrawn totally in high definition, and as such, looks very sweet. I mean, it was never ugly back in ’94. It was pretty much way ahead of its time visually, but the redesign gives the game a nice sheen over what is obviously now a retro look, and the finished article looks very nice, in a Super Street Fighter HD Remix kinda way. The characters are very cartoon-like, with the entire game looking like it was ripped right out of a comic book, however, the designs are detailed and the backdrops are equally as nice. It’s a very busy game visually, with something constantly going on somewhere on the screen, no matter what you happen to be doing.

Oh yeah!
Earthworm Jim has some of the craziest sound effects that have ever graced a game, and I have to say that it really works. The game is totally wacky and the sound effects reflect that very well, from Jim’s voice screaming ‘woah nelly!’ when riding a guinea pig to the sound of a cow being launched across the landscape.  The music doesn’t get boring either, projecting retro awesomeness at every turn, and it makes a nice change to actually enjoy what is actually a very cheesy score.

An entire can of worms!
Multiplayer on Earthworm Jim was a bit of a surprise, combining both competitive and co-operative gameplay in one mode. The first thing to mention is that you are competing against your team mates for power-ups and orbs. This doesn’t make the game too competitive, though, as at certain points in the levels you will have to work together to progress. Things like pulling a switch allowing another player to go through a section to then return the favour helps keep everything friendly. All in all, the multiplayer is spot on and works really well, though the main issue is actually getting a game. Several times I attempted to connect and there was just a lack of players. The alternative way would be to play locally where the same rules apply as online, it works exactly the same. All players will be on the screen at the same time, and as such there is no split screen, and to be honest, it’s not really needed.

Is that a blaster in your spacesuit or just glad to see me?
Earthworm Jim HD is a great game that would have been a brilliant release on XBLA exactly as it was back in 1994. However, this release exceeds those expectations with it being redrawn gorgeously, and made even better with added replay value, especially if you have some mates that also have it. It’s a simple game to play with even simpler rules, but it’s a true representation of a classic title that stood out in an over-saturated platformer market. That said, even thought I’ve raved about it, because of its random humour that can be a little too random, and the harsh difficulty curve, the Earthworm Jim experience may not appeal to everyone, especially the younger gamer amongst us. Still, it’s definitely worth giving it a try, I can’t see many being disappointed.