If there is one game that transcends the ages, it’s Poker. Over the years, we’ve seen Poker games in their hundreds spanning all formats; some awful, some rather good. This isn’t the first attempt to bring the card game to Xbox; however, this one probably has the biggest backing in terms of marketing and attention to detail. So, does this latest effort from Microsoft trump buying a pack of cards, getting a group of friends around with some cans and playing until the early hours? Well, let’s find out…

What is Poker? Each player has five cards and plays against everyone else around the table. The goal is to have the highest ranking hand, which is determined by comparison of the cards in your hand and those dealt in the middle of the table. Chances are, you’ve played this at some point in your life and if you haven’t, go buy a pack of cigars, grab some cans, keep a few spare notes in your pocket and rectify that immediately!

When Full House Poker was initially revealed, there were people labelling it as the replacement for 1 vs 100. Despite the fact that one is a quiz show and one involves a deck of cards, it’s not surprising that one might be baffled by such a comparison. However, with some of the modes available in the game, such as season play and tournaments, this may not seem as alien as you might think. Although, unlike 1 vs 100, Full House Poker also encourages you to play single player, enabling you to go up against AI controlled opponents, whether it be for practice, for fun, upping your ranking or achievement hunting.

Deal!
The game is very straightforward to control. The options are between betting, folding, raising or checking and you operate your avatar by using the left or right triggers and dependent on the way you press it, it affects how you play your cards. So, a sharp button press will mean that your avatar confidently drills his card into the table with a sense of invigoration and inspiration. However, a more slight press will have your avatar sheepishly put down their cards, seemingly embarrassed by their hand and presenting as too stubborn to fold so as not to look like a wuss in front of his mates. However, you need to bear in mind that this could all be part of an elaborate bluff by the player performing the move to try and lull you into a false sense of security. So while it seems to be a simple, unnecessary addition to the game, it can also add a lot to the psychology factor and change the way people view their opponent in a poker showdown (of course, it also prompts people to spam and ruin the essence of the gesture in the first place).

You can also perform tricks at the table by using a series of button presses, whether that be pressing right on the D-Pad three times in succession to do a coin flick between your fingers or something else, these can fill the void while you’re waiting for your turn and even create a tactical ploy against your opposition to show you’re relaxed, familiar with the game and in control of your destiny. However, like the card playing gestures, it can also be spammed and make you look like a burnt out magician that is changing his trade because he can no longer pull a rabbit out of a hat, but that’s another story. 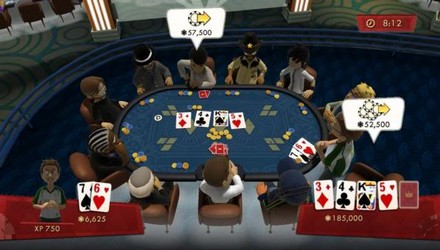 Snake eyes
Graphically, there’s not much to say, except that you’re in a room full of Xbox avatars. If you like the look of Avatars, you’re going to like the look of Full House Poker. Of course, this does create some slowdown when the room is filled to the brim. The game certainly isn’t shy in framerate dips and the loading screens can also be a bit unforgiving, but these are minor niggles. However, this does carry across into the online arena and when you’re playing with several of you in the same room, the game can experience some slowdown, especially when people are spamming Avatar actions. Don’t get me wrong, this doesn’t reach 1 vs 100’s levels of lag but it can definitely grate your patience as you go around a big table. As far as MS licensed Avatar games go, this is one of the best. The actions seem fluid and the reactions all seem naturally created for your Avatar as opposed to some of the indie titles that use Avatars in their game and the motions appear stunted.

One thing I did notice that disappointed me was the lack of Kinect Support. In my mind, this was a great opportunity for Microsoft to collaborate their latest technical marvel with one of their latest games. This is, by no means, a criticism of the end product, but I can’t help but feel MS could have somehow implemented Kinect Support into this game. Whether it is enabling you to perform the tricks in front of the camera using your own hand gestures (although I realise this would be difficult for the camera to detect at this stage) or perhaps something as simple as you swiping your hand a certain way to deal your cards, maybe even detecting your facial expressions and applying them to your avatar to show how they feel about the upcoming hand, hell, even just enabling video/voice support and allowing you to use the Kinect camera. Perhaps this is something they could do to spike online activity if there is a dip? Maybe these things could be patched in? While I know many of my suggestions seem gimmicky, I still feel Microsoft adding Kinect support to this title would have been a good call, especially since there hasn’t been a lot announced in Kinect’s future as pertains to games.

Poker face
Unfortunately, there is no voice commentary in the game and the only sounds really come from crowds cheering or soft music playing in the background. The music is quite calming and creates a very relaxed atmosphere in the game, making it a game you can very easily unwind to. The sound ultimately serves its purpose, it doesn’t particularly add to the experience, nor does it detract from it, although, I thoroughly enjoyed being able to voice chat with my friends online. That feature really does enable you to get a gang of you together to have some fun and play some cards. 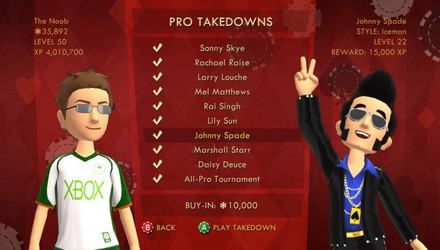 All these stats and more!

Showdown!
As I mentioned previously, a big portion of this game’s appeal is determined by its online capabilities. The game enables support for up to 30 people online in various modes, but also introduces seasons and daily tournaments to the fray. At the moment, the Spring season is ongoing and enables you to compete in daily tournaments to determine an overall ranking and attain a daily prize. Already, the Live activity for this has been strong and the future is certainly looking bright for this title. With further tournaments sure to be announced and competition always evolving, this could very well be a Live title to own in the coming months.

However, it’s not all about competition. I mean, sure, you can go online with Full House Poker and rub shoulders with the best and compete for a ranking, or you can play for fun, and the fun still contributes to gaming unlockables. As you play each game, so you accumulate experience points and unlock items in-game. Naturally, the better you do, the more experience you’ll gain and the reverse applies if you’re having a poor game. In this regard, the game encourages you to play how you see fit and doesn’t force you to stick to one mode in order to get the full experience.

Are you bluffing?
When taking everything into consideration, from a single player point of view, I preferred Telltale’s recent poker effort, Poker Night at the Inventory (check out our review right here), due to the characterisation involved there, the comedic banter across the table and just the general feel and flow of the game. That being said, Full House Poker offers a multiplayer mode which Telltale’s Poker effort doesn’t and what an online component it is. This is a great online multiplayer game that has potential to stand shoulder to shoulder with the best Live has to offer. There’s a lot of elements sewn into the end product and plenty of replayability. On your own, it’s an attractive diversion from your other games, but is unlikely to sustain you. The multiplayer, however, is where this game thrives and flourishes. At 800 points, it’s definitely worth going all in!