The Lego video-games, love ‘em or hate ‘em, are now a staple of the industry, with a variety of parodies that like to place well-known franchises within the Lego world and add a good dose of fun and humour to the mix. Batman and Indiana Jones have been Lego-ified and Pirates of the Caribbean is soon to receive the blocky treatment too, however, probably one of the most popular of the series is Lego: Star Wars. The third entry of this sub-series, Lego Star Wars III: The Clone Wars, is now here and as one of the relatively few 3DS launch titles available, let’s see if it’s a worthwhile purchase to keep you occupied on your shiny new handheld.

I find your lack of coherence disturbing

Lego Star Wars III: The Clone Wars is based on the recent cartoon series on Cartoon Network, so if anyone’s a fan of that, then I’m sure they’ll feel right at home with the storyline here. I’ve never watched it, and the manner in which the story is presented within the game is so instantly forgettable, that I can’t actually remember a single thing that happens. I presume from the title that there was a war, involving clones or something. Each level jarringly shifts from scenario to scenario with barely any logical progression, creating a narrative that feels terribly disjointed. The famous scrolling walls of text and some short cut-scenes (where all of the characters helpfully talk complete gibberish) are your only hope of trying to grasp some sense of what the hell’s going on.

Play or play not, there is no try
If you’ve played one of the many incarnations of the Lego series then you’ll already be familiar with the gameplay of The Clone Wars. The formula is rarely altered all that much, offering a mixture of platforming, combat and puzzles. A huge host of Star Wars characters are on offer and generally fit into one of three classes: Jedi or Sith, able to wield a lightsaber and use Force powers; a light gun class that fires pistols etc. and can use a grappling hook; and a heavy gun class, bolstering a machine gun and explosives. You will usually have a team of several characters at once, and are able to switch between them on-the-fly, as the situation requires. 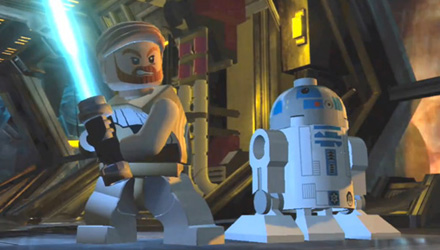 Who ever said a dog is a man's best friend?

No one in their right mind would argue with the awesomeness of lightsabers, so for the majority of the game I stuck with my Jedi or Sith whenever possible. They’re arguably the most powerful and useful class, able to double jump, block and reflect enemy fire right back at them, and slice up foes like cooked ham. Both of the gun classes feel vulnerable in comparison, and are incredibly awkward to aim, fixing your direction of fire as soon as you start shooting. Auto-aim is implemented, but it’s just as likely to ignore your enemies and fire at a nearby rock, as it is to actually shoot at anything threatening.

There are 13 levels in total, the majority consisting of standard platforming fare with a reasonable amount of surprisingly enjoyable flying sections chucked into the mix, to add some variety. What’s implemented in these excerpts bodes well for Starfox being a success on the 3DS, as it’s bound to do an even better job. The on-foot sections of Clone Wars can get repetitive at times unfortunately, with combat requiring little more than mashing the X button, and the same kind of insultingly easy puzzles cropping up over and over.

In fact, this is the easiest game I’ve played in a long time. Infinite respawns certainly are a major factor, but I rarely found myself dying that often anyway. Enemies topple around you like cardboard cut-outs, and health pickups are handed out like sweeties. The ‘puzzles’ are unworthy of their name, as despite how ape-friendly in design they already are, the game patronisingly flashes which character to select to solve it, and has pop-up hints. It even tells you exactly how to defeat some of the bosses!

The level designs are also dumbed-down greatly from the console versions of the game, with less variety and a smaller scale. They’re still of a decent enough length though, and the game doesn’t let you save and exit until you’ve reached the end, regardless of the fact each one is conveniently split into three Acts. What were they thinking? This is a portable game we’re talking about; you can’t always secure 45 minutes at a time to divert in one sitting, if you’re out and about. 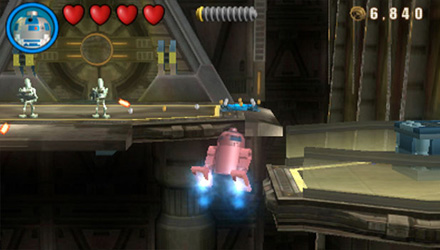 In total, the Story mode took me just over ten hours, and I’m not the type to rush through games. There’s always the replay value of Free Play mode however, for the dedicated few to play through again with the characters of their choice, and work towards finding all of the collectibles and unlocking everything in the game. Disappointingly, this is made less enticing by the fact that a major staple of the series is absent; co-operative play. Some local or internet play would have really spiced this up, as previous incarnations of the series are a fantastic piss-about in multiplayer, fighting for pick ups and stabbing each other in the back.

So Lego Star Wars III 3DS is what it is: a mildly fun single-player platformer aimed at a young demographic. I can’t put my finger on why, but the game is still a decent bit of entertainment. At its best, it’s a relaxing, mind-numbing hack-and-slash that is effortless to play. Smashing everything up in the level and collecting all the studs (in-game currency) is also oddly therapeutic. Some of the humour is blatantly aimed at six year olds, such as a gag where a droid is found sitting on a toilet (obviously so hilarious, it had to occur during the game two or three times), but the odd cut-scene will make you laugh. Overall, this was far from a chore for me to play and complete; it just isn’t anything spectacular.

Does it look out of this world?
The characters, objects and environments are faithfully reproduced from both Star Wars and Lego in equal measures. 3D works reasonably well in this game, supplying the levels with plenty of depth which adds to the immersion factor. The visuals aren’t really anything to get too excited about in general, but the animations are reasonably well done, like the charming flourishes as your character leaps about swinging their lightsaber. 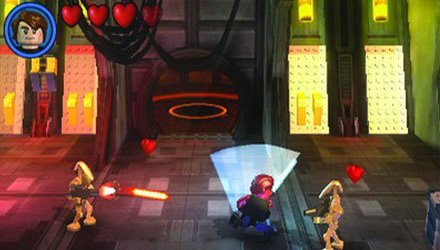 May the force be with you... the force of my lightsaber, sliced through your chassis.

FMV cut-scenes accompany the game, although they’re not of particularly high quality, sometimes looking a bit blurred and pixellated. This is a common trend I’ve seen so far with 3D video on the device, as is the fact that the depth is not as impressive as properly rendered scenes.

*Dooo, dooo, doo-doo-doo DOOOO do!*
The Star Wars soundtrack is a thing of legend, so including this in the title automatically gives it Brownie points. The music accompanies the on-screen action nicely and helps it have an epic feel, despite the fact that you’re essentially smacking around little plastic bricks like you’re back in pre-school. The sound effects let the side down though; some are a bit too weedy and a few of the female voice clips sound disturbingly orgasmic.

Is the force strong with this one?
If you’re an early 3DS adopter like me, then the selection of games so far is, admittedly, rather thin on the ground. For that reason, you could do a lot worse than giving Lego Star Wars III: The Clone Wars a try, especially if you’re a fan of either franchise. This game will definitely appeal to kids, but its repetitive and easy nature stops it short of being an entirely brilliant experience for grown-ups. Very good, young Padawan, but you still have much to learn.