The Madden franchise is one of the games industry’s longest running sports series’, endearing fans of Gridiron action for well over a decade.

So, another year and another Madden release, but will the 2012 offering take the series forward with new features, or is it just more of the same, hiding behind another high-profile cover athlete?

This ain’t no draft

The first thing that is evident when you fire up Madden NFL 12 is the exceptional presentation, something that EA Sports titles have always excelled at. After watching a game intro that is likely to hype up even the most relaxed of people, you’re taken to the well-designed and easy to navigate menu structure, all the time surrounded by your favourite NFL superstars. One thing is clear; there is lots and lots to do in Madden NFL 12. You can jump straight into a quick game, start your own franchise, tinker with depth charts, venture online or create your very own Madden Ultimate Team (the card collection that EA has been pushing more and more recently with each of their key franchises). 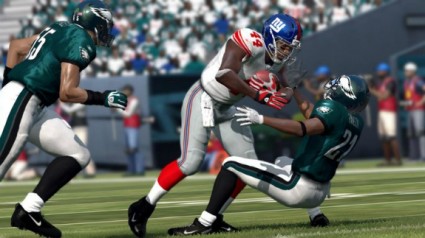 What a difference a year makes…
The most significantly improved area of the 2012 offering of Madden is the franchise mode, which now presents the payer with a comprehensive opportunity to guide their favourite team through the pre-season, regular season and hopefully beyond. There is so much more to the new franchise mode than just playing games, however. What really separates Madden NFL 12 franchise mode from previous offerings are the off-field activities, such as the introduction of cut days, where you have the chance to trim the under-performers from your squad in preparation for the regular season ahead, and the rookie scouting system, which enables you to seek out talented youngsters and have the opportunity to add them to your squad at the end of the season.

The Madden Ultimate Team returns, with improvements such as the highly-requested card trade feature. No longer do you have to worry about having your valuable legendary card sniped at auction; trades can be worked out offline and then completed effortlessly. The presentation, again, is excellent, and the cards look even more collectable than they did in Madden NFL 11.

Talking of being collectable, as previously seen, EA have created a number of virtual collections within Ultimate Team that reward the player with coins and a limited edition card once completed. As the NFL season progresses, we can expect to see a huge number of virtual collections added to keep Ultimate Team fans happy. With the ability to purchase Madden currency with Microsoft Points, EA would be foolish not to introduce as many collections as possible. If you’ve always wanted to play for an NFL team, then you’ll want to check out the Superstar mode, where you’re able to create yourself as the next big thing in the league. Once you’ve created your virtual self, you can either assign yourself to any roster in the league, or leave your fate to the hands of the draft Gods and see which franchise you end up on; a very nice touch.

Once you’re on a squad, you enter a four-week training camp period where you can put yourself through various training routines and warm-up matches. Each of these allow you to unlock skill points, that you can use to make yourself just that little bit better. Progression through the season lets you play as yourself and sim the game when the opposite side of the ball is on the field. Once your first season is completed, you get to go again, but this time you’re not the rookie on the team any more, and expectation levels will be higher. Controls are easy to pick up for new players, but difficult to master, especially when you start calling plays to counter what your opponent is doing. The key thing is that it is a game which is playable by all. This is crucial for the UK audience, with whom the sport isn’t yet especially popular.

For those not familiar with the Madden series, the game does a few things to ease you in gradually. Playing the game on rookie difficulty makes un-catchable balls catchable, and gives your quarterback a good chunk of time in the pocket to make that perfect pass. Using the Gameflow feature means that your coach will select a play for you, so that you can worry more about getting to grips with the gameplay and not with the playbook. You can get braver at any point during a game and choose to select any play from your playbook, or opt to ‘ask Madden’, who’ll suggest three suitable options for you to select from.

Controls remain mostly unchanged from previous Madden titles, which is no bad thing, but everything feels a lot tighter this time around, which is somewhat down to the much-improved player animations and movements. In fact, Madden NFL 12 impresses in just about every area. It’s probably the biggest leap from one season to another that I’ve experienced in terms of new features and improvements, certainly from this generation of sports titles at least. 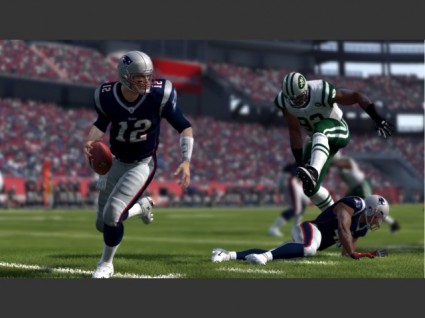 You look da money
The game flows effortlessly thanks to the new player animations and tackle system, and it looks brilliant. The camera angles are also very fluid and add superbly to the overall presentation of the game. EA have done a magnificent job of keeping the experience very authentic; it’s almost like watching the Super Bowl every time you’re out there on the field.

Eyes on that Quarterback!
Unfortunately, the sound does let Madden 12 down. While it is as good as what you’ve heard in NFL 11, it’s not an improvement. In fact, a lot of the sounds were merely recycled from the previous game. The same applies to the commentary. A lot of the time the commentators won’t include player names, making it all seem very impersonalised and generic. In fact, most of what is spoken is also regurgitated from previous instalments of the franchise.

Considering how the game has improved in so many other areas, the sound really is lazily presented, and it does detract from the overall experience. Whatever annoyances you may have had with the game’s sound previously, they’re probably still there in NFL 12. 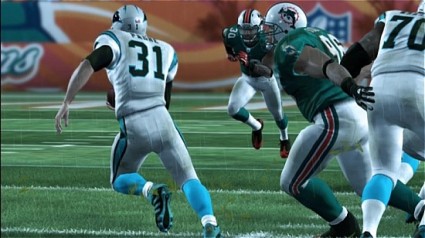 We’re in this together
Taking Madden NFL 12 online is a pleasurable experience, with the introduction of online communities. There is a clan-esque area that allows users to invite friends and like-minded people to a community, that can not only compete against each other online using the community pre-set rules, but also compete cooperatively in the online team play matches, where players represent the community as a whole.

Online play also extends to Madden Ultimate Team, which allows you to see how good your card collection really is, by facing off against American teenagers who have spent the first few weeks following launch assembling a team rated 99 throughout the field. 32-player online franchises, complete with a full fantasy draft, can also be arranged (a mouth-watering prospect, I’m sure you’ll agree).

Once in an online franchise, your team can be managed on the web, which is a fantastic addition. This allows you to play with your depth charts whilst in the office, getting ready for that important clash with your online rival in the evening! At the time of review, and after many, many late night online matchups against fellow journalists and NFL fans, there was zero evidence of any lag during online gameplay, a reassuring feeling after the countless lag issues evident in titles such as FIFA 11. Even Madden NFL 11 suffered online with laggy kicks and disconnecting issues, but for now at least, EA appear to have sorted things out for this version of the game.

Mad for Madden?
I’d find it extremely difficult not to recommend Madden NFL 12 to fans of America’s game, and to be honest I’m finding it difficult not to suggest it to people who aren’t particularly familiar with the sport itself. If you’re a sports fan, you could do a lot worse than picking this title up. If you are an American football fan, on the other hand, you really can’t afford to miss it.