You’ve got to feel a bit sorry for the PSP; a great little machine that is severely hampered by a lack of a second thumb-stick. We can only really guess at why Sony chose to ignore such an important part of the modern day control scheme, and why they continue to overlook its importance in subsequent PSP redesigns, but it’s fair to say that it puts any company with the intention of creating a first-person shooter for the system at an immediate disadvantage.

Using the face buttons in the same way as you would an analogue stick has become the standard work around, and while one or two developers have successfully crafted fun shooters using this system, it’s extremely rare when it feels anything other than ‘workable’. In fact most attempts to recapture the adrenaline rush that a good FPS provides tend to end in failure. EA Canada decided to try their hand, bringing the Medal of Honor series to the console, and to be fair; they’ve done a surprisingly decent job.

Three’s company
The game hasn’t been named ‘Medal of Honor Heroes’ simply because it (arguably) sounds cool, it’s because over the course of the game you take the role of three of the franchise’s previous protagonists; Jimmy Patterson, John Baker and William Holt, as they take to various campaigns around Europe. There really isn’t much story to go on; before you enter a campaign in each country you are provided with real WW2 footage along with a familiar voiceover explaining your character’s reason for being in that location, with text updates before you begin each actual mission.

To be frank, the story is so water thin that you’ll barely notice it’s there. There is absolutely no attachment to the characters, no interesting story arcs, just enough reasoning to place you in the locations that you’ll visit over the course of the game. That could be said of many war games over the years, but especially with the likes of COD and Brothers in Arms raising the stakes in the storytelling area, you could be forgiven for expecting a little more from this area of the game.

Fun, bite-size Nazi slaying
So, I mentioned the usual control scheme issues that usually blight shooters on the PSP, but in fairness the face button system works pretty well here and is generally very responsive. It is nowhere near perfect; that’s an impossibility to achieve with the hardware provided, but EA Canada have definitely worked their way around the system well enough to make the game feel fluid and enjoyable, once you get used to it of course. To get around the need to fine-tune your aim, there is a certain amount of leeway allowed when firing, but it is not once intrusive on the gameplay experience and nor does it hold your hand as you play through. The A.I. can prove to be a bit wonky here and there, with most of the stupidity coming from your own team-mates as they constantly make a point of trying to get in your way when you are taking aim. The enemy A.I. is balanced enough to be challenging and a lot fun to fight against. 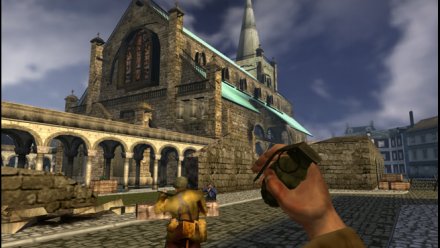 One of the better looking bits of scenery in the game

Just like the story, the levels and missions themselves are somewhat watered down. On each map you are given a fairly open playground with several objectives and secondary objectives (which basically amounts to item collection), which are clearly marked by yellow and blue arrows respectively. While some of the objectives are exactly as expected in a war game, such as destroying gun placements or generators, other things like securing certain areas are ripped right out of a multiplayer game type. For example a couple of missions require you to fight to capture key points in small towns, and those key points are represented by flags that you must be near for a set amount of time. This strips a little of the immersion factor from the campaign as you are forced to recognise that you are playing a cut-down experience. Where the levels work well is in their size. Each level is fairly short, perfect for gaming on the move, although the game does lack a little bit of length all round. It’s worth mentioning that there is no check-pointing system to be found in any of the levels and while you can understand its omission, it does start to grate a little should you be close to completing a level only to die unexpectedly.

You get three levels of ranking after completing the levels in a bronze, silver, and gold system, which can unlock items and outfits for you use in the multiplayer mode. Some of these are serious such as different uniforms, some hilarious, with my personal favourite being the pink German long-johns, but more on the multiplayer mode shortly.

Looks like war!
Medal of Honor Heroes isn’t a stunning game by any stretch, but the visuals do a worthy job with no frame-rate issues whatsoever. While the environments can look a tad lifeless, and the character models a little lacklustre in comparison to other games on the system, it’s certainly not what you’d describe as ugly. I have to admit I was particularly impressed with how detailed the guns looked, with each rifle modelled as perfectly as possible.

Shell-shocked
The quality of the sound effects in this game tell a tale of highs and lows. The highest point, as similarly with the visuals, focuses mainly on the weaponry with each gun sounding thoroughly satisfying when fired. The low points in particular come in the form of the shouts of your colleagues, with ‘We’ve got them on the run’ being repeated every thirty seconds. The other voice acting found in the various intros feels authentic and reminiscent of what has gone before in previous Medal of Honor titles. The music is suitable and inoffensive, almost stereotypical of any WW2 game you’ll find on the market, so you’ll find no surprises there. 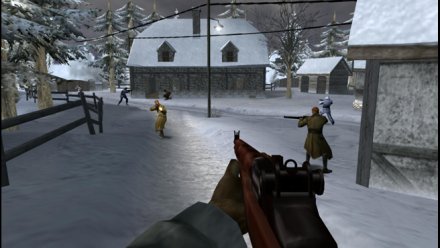 Check out the guns

32 player warfare in the palm of your hand
It’s in its multiplayer options where Medal of Honor Heroes really excels. I really can’t express how surprised I was with the quality contained here. Using the infrastructure mode, up to 32 people can battle it out over the internet, in possibly one of the smoothest online experiences I’ve seen on the PSP. There are a whole host of modes on offer alongside your typical deathmatch modes, including infiltration, that requires you to steal flags from your enemy’s base, domination, which is your battlefield style fight to take over a map, and demolition in which you must destroy a bomb-site. You’ve also got a couple of variations on the ‘king of the hill’ game type in ‘hold the line’ and ‘battlelines’.

As you can tell, this is a fully functioning online mode on the PSP that is a lot of fun to play in spite of the console’s technical limitations. Aside from the occasional disconnection, I’ve yet to experience any lag or other major technical issues, and this entire mode is so well polished that it’s worth the admission fee alone.

Good like the Allies or baaaad like the Nazi’s?
Whether you will enjoy Medal of Honour: Heroes or not will depend greatly on what your expectations are of what the system is capable of and whether you can acclimatise to using the face buttons to aim, although again that is a fault of the system rather than the software. While some might be turned off by the weak story mode and the cut down objectives, the combat remains fun and the set-up is suited for a portable system with bite-size play in mind. The online mode is frankly a triumph, so if online gaming is important to you and you are often likely to find yourself in a Wi-Fi hotspot or like to game on the loo like me, you can do far worse than give this game a go.