Back in 1989 Ted Bundy was executed, George Bush Senior became the 41st president and there was the Massacre of Tiananmen Square. Movie lovers had the likes of Batman, Look Who’s Talking and The War of the Roses. It was also the year that a very clever chap called Kouichi Yotsui came up with a side scrolling platform game called Strider, which kept arcade goers very happy and very poor.

Why are we going on this trip down memory lane I hear you ask? Well Kouichi has directed a new PSN and XBLA title, developed by feelplus and published by the mighty Square Enix, that is something of a homage to that title and is available for download at £9.99 or 1200MP respectively.

Can it reach the stars or is this destined to dive in the charts? Read on to find out.

Fly me to the moon
The year is 2081 and a chap called Faust has pretty much annihilated the Earth, leaving humanity on the brink of extinction, until a team of five ninjas, known as Moondivers, have another idea and decide to fight back in a bid to save the Earth. The game sees you take the role of one of these ninjas and takes place over multiple stages that each culminate in something of a boss battle. Along the way you pick up Moonsault Combinations, which are like magic and can be used to attack enemies while also acting as the game’s collectible, with sixty to find in total.

Stars or stripes
There are four characters available from the off; Seyfert who is fairly weak but quick, Hitori, who develops more in MP than anywhere else, Tolby, who is the all-round character, and Ourion, who develops quicker on Power and has low MP.

As you go through the game defeating enemies you gain Experience Points (EXP) and when the EXP bar is full, you level up gaining Customisation Points (CP). These can be spent to develop Hit Points (HP), Moonsault Points (MP) or Power (POW) in between stages or at the end of your game, adding a touch of the RPG to proceedings. HP is your health and when it hits zero it’s game over, POW is your ability to do damage so the higher the better, and MP is used to perform the Moonsault Combinations. Different combinations use different amounts of MP and as mentioned earlier, new combinations are hidden throughout the game world. You can equip any four Moonsault combinations at one time. 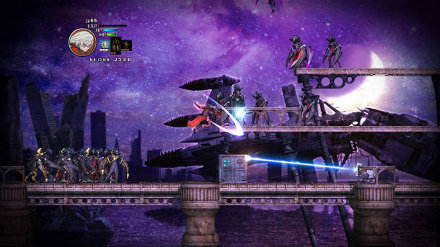 Each character has a sword of some description and to use it, you attack with X. Jump is with A and you can double jump by tapping again or do a ground attack pressing down and A while in the air. B uses your chosen Moonsault Combination and then it gets a bit weird. LT is used to crouch and RT is slide. On the face of it, it’s not that weird I know, but it is just a little confusing that you can’t crouch when pressing down. This is because some platforms can be jumped through and pressing down will drop you through the platform so that you can hang from it. However, some platforms are solid so you can’t pass through and some that look like they are in the foreground aren’t and you can’t touch them at all. The slide is also not really a slide, either; it’s a flying kick/slide as you can use it in mid-air. In all honesty it seems more effective in making you move quicker than as an attack option anyway, so maybe a simple sprint button would have been better.

The stages themselves are also a bit different in that a stage is played over multiple sections, the number of sections varies with the early levels having five or six, while the latter levels have so many I lost count. The size of these sections is also hugely varied with some lasting literally seconds while others take quite a while. The game doesn’t save at the end of these sections either so if you get through five and then die you will have to do them all again.

During the levels you can pretty much sprint through large sections ignoring enemies should you wish, and at other various points the screen closes off on either side and you have to stand and fight until all the enemies or you are dead. At the end of the stage there is a boss but again this is something of an anomaly as some of these are traditional bosses of the big, find a weakness, follow a pattern variety while others are smaller, yet more robust and a couple just seem like regular enemies. 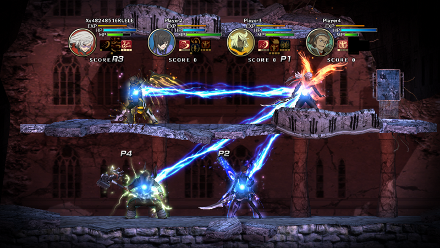 The Ninja version of a Care Bear Stair

Blue moon
Moon Diver plays the 80’s Arcade Japanese Anime card really well, giving a pretty distinct feel throughout and if you like that kind of thing there is no doubt you’ll love it; the characters are bold and colourful and the overall detail of them is pleasing to the eye. The cut-scenes also follow the Anime trend, albeit more a collection of stills than any genuine animation.

On the negative side, the levels themselves seem fairly blocky overall and effects like explosions are all a bit outdated. The general movement of characters is a bit robotic too, so there is little flow to proceedings and the structure of these levels is, at times just plain mad.

Moon River
The sound keeps to the same theme as the graphics with a kind of Japanese Techno-Pop sound track playing throughout the game. There is no increase in pitch when the action picks up as it basically can’t get much quicker without reaching the level of High Speed Dubbing (look it up, young ‘uns).

Sound effects are, like the game in general, very 80’s arcade. The weapon attacks sound a bit tinny, characters grunt when they jump or get hit and the footsteps seem a little too tappy. What gets me is that regardless of the surface you are on, or the character you choose, these effects are the same. The only thing that changes is that if you pick the token female character, Hitori she sort of squeals instead of grunts but really there is very little distinction. 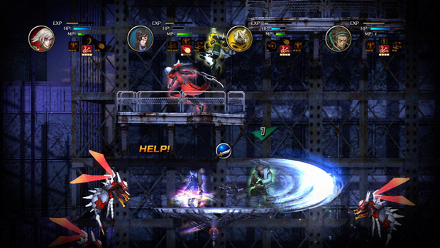 Your failure is there for all to see

Synchronised diving
Moon Diver caters for up to four players in an Xboxlive co-op and in all honesty, this is both its saving grace and underlines everything that is wrong with the game. On the positive side you can combine Moonsault Combinations to help each other out, like making part of the team invincible or restoring everyone’s HP. You also have the power to restore a fallen comrade as when running out of HP, rather than just being dead, you are chained up and your friends have ten seconds to free you from the chains. This eliminates a lot of the annoying level restarts. The pace of the game is increased even further in co-op, meaning over the later levels there is just no time to breathe, which can be both positive and negative. Positive because it helps with the flow of the game. Negative because you might find yourself searching the screen for your character, before realising he’s chained up after taking a beating while you were looking at the other side of the screen.

The main negatives are that in true coin-op arcade fashion you must all stay on the same screen, so if someone falls behind they will either teleport into the screen, often in a place where they’ll quickly take a beating, or the rest of you have to go back to allow them to navigate a wall, platform or gap that the straggler is stuck behind. In an actual arcade this was never too much of an issue as you could easily tell the fella next to you to take a few steps back, not so easy over Xbox Live where the Microphone appears to be used about as often as a Credit Card on PSN these days. Over the early levels this is not such a bad thing but later on it’s just plain annoying.

Then there is only one of the Moonsault Combination collectibles on screen at one time, so only one person can collect it and this can lead to a frantic race to pick it up (bad lack if you’re Ourion). Finally, you don’t keep the unlocked level unless you host the game so you might play through the entire thing and ultimately still find yourself only able to start on Stage one next time round.

Total eclipse?
It is no secret that I am a big fan of XBLA and old skool gaming on the whole, but this takes it a touch too far. The graphics are a bit dated and the background music is better suited to a rave party than a Video Game. The levels lack structure and at times the controls come across as a little clumsy to say the least.

That is not to say that Moon Diver is a bad game though, it just isn’t a particularly good one. Fans of the Strider series or Japanese Anime will no doubt get some enjoyment out of it. The multiplayer has some charm in short bursts and if you like a good challenge (Si, I’m thinking of you) try playing the later levels on your own on Hard and see how long it takes before you break a controller, a window, or both.