One of the most fun elements is that your companions will join tournaments as well, and you’ll often find yourself fighting against them. Nobles and kings of the realm in which the tournament is held will also often join, allowing you to beat the crap out of that annoying lord that really doesn’t want you to marry his daughter.

As you grow in power as a vassal of a king you will eventually receive towns, cities or castle to administer, giving you sources of revenue to maintain bigger armies, and getting you more deeply involved in the political game. Seeing your banner flying from the wall of a major city is definitely a quite empowering sensation that will make you feel like you’re actually gaining more influence on the world of Calradia. 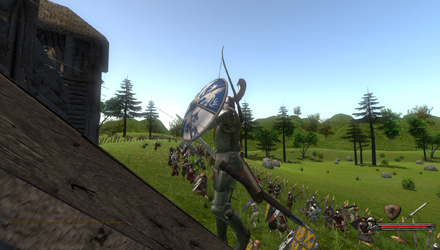 Eventually you might end up creating your own kingdom, and that’s when the political game will hit you in all its complexity. You’ll find yourself approaching the various lords in order to gain their support and their armies to your cause, sending your heroes as emissaries to the other kings to offer truces and ask for their acceptance as a fellow ruler.

Whether you’ll play the imperialistic ruler focused on expanding your borders at the expense of the others, or the conservative king that will try to keep a good relationship with his neighbours (or a mix of the two) is your choice, and it’s a very fun and interesting one, bringing a whole new level of strategy to an already rich game.

Digital carnage and  little details
The game’s graphics are a bit hit and miss. It’s pretty obvious that some textures have been ported directly from the original Mount & Blade, and their quality definitely isn’t top notch, also some of the animations are a bit clumsy. That’s more or less what you would expect from an independent developer with an art team that counts only four people. Considering that, as you can see from the pictures included in this review and from this extensive flickr gallery, the visuals of the game definitely perform more than decently, especially considering that the engine needs to show hundreds of soldiers (and their horses) of the screen without causing a disastrous meltdown in your video card.

That said, the game really shines in its architectural design that involves the modelling of castles and villages. They aren’t just beautiful to see, but also show the level of research done by Taleworlds to create their living and breathing medieval world.

The manical attention to detail is one of the game’s delights. Something that always bothers me, for instance, is that in most fantasy/medieval games, when not used shields seem to be randomly glued to a warrior’s back, often badly placed because the model is not exactly designed to be placed there (Dragon Age Origins is a good example of this). In Mount & Blade Warband shields have a cord that goes around a warrior’s chest to hold them in place. Small details like this are scattered everywhere in the game, and show that a small developer with limited resources can often put more attention in designing their games, than bigger ones with budgets many times larger.

This said, again, while the polygon count had to be necessarily kept down, and some sub-par textures can easily be spotted on some soldiers, large battles are quite the spectacular sight.

Medieval tunes and the clash of Arms
The soundtrack is more or less what you would expect from a game like this. You definitely won’t hear the Berlin Philharmonic, but the music tracks do a pretty good job at underlining the middle ages atmosphere. They tend to become a bit repetitive after a while, but that’s mostly due to the game’s incredible longevity. Even the best soundtrack of the world would become boring after 200 hours of gameplay.

Combat sounds work pretty well. I found the clashing between swords especially pleasing to hear, alongside the impact of arrows and bolts on your shield. Combined with the spot-on animation that accompanies it, you’ll often find yourself sinking your head between your shoulders during sieges, while dozens of arrows are flying your way and battering on your shield.

There’s also a lot of shouting, quite realistically. Maybe even a little too much, and during the most crowded battle scenes and sieges you’ll very possibly find yourself toning the volume down to avoid waking up your neighbours.

Unfortunately there’s no speech besides a few taunts when you encounter some bandits. All dialogue is displayed the old fashioned way, with good old text that you’ll have to read. Again, this is unfortunately the toll you have to pay with low-budget independent projects like this one. It doesn’t really bother old gamers like me, but younger ones used to the fully voiced script of newer games might find themselves a little disoriented. 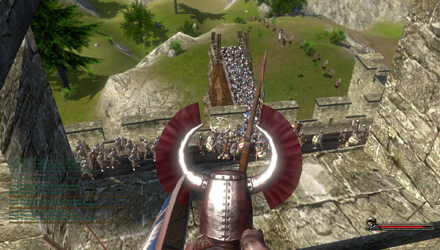 Dueling online is the stuff of legends
Multiplayer is a new element in Warband, since it wasn’t present in the original Mount & Blade.
You can play in several game modes that range from team battles to sieges against human players. The servers vary in size, and the biggest ones have room for up to two hundreds players, letting you experience the thrill of extremely big battles even in a multiplayer environment. There even are “user created” multiplayer events like formation battles, in which players fight in massive organized battles that tend to be extremely fun and quite realistic.

That said, one of the biggest selling points of M&B: Warband’s multiplayer is the combat system. Given how much skill and strategy are involved in the complex plethora of attacks and blocks, dueling against other human players tends to be an extremely thrilling and exhilarating experience, that no shooter game can really offer. As I said before seeing two skilled players trade blows in this game is a quite unique experience in the field of gaming.

Add this to the longevity of the single player mode, and you’ll find yourself spending less than 30 dollars for a game that can easily keep you hooked for a few years.

A perfect game?
Unfortunately a few flaws can be found in the game’s presentation and UI. The text scroll during battles is definitely oversized, with the “killspam” messages often overtaking a sizable part of the screen and looking extremely clumsy. Luckily this can be modded, and the problem is easily solved by reducing the size of the font. Still, I’m quite surprised that the developer didn’t put an option in the game itself to change this, because the default font seriously looks quite bad. It’s an easy mod to apply, but that’s something we shouldn’t need to mod, really.

Friendly troops are normally differentiated from the enemy by an icon over their head displaying your banner (or the banner of their lord, in the case of joint battles with your allies). This is quite an immersion killer, and an experienced player will learn to distinguish his troops without external help. Luckily this can be completely deactivated in the options menu, but I can’t help but think that there could be better ways to pinpoint friendly troops without recurring to such an invasive method.

A last quite glaring flaw is hidden in the random map generator, that works well as long as you’re fighting on a plain or on rolling hills. The problem becomes apparent when you chose a mountain area as the stage of your battles. The difference of elevation between the peaks of the mountains and the lowest areas tend to be too extreme, creating overly rough terrain with extremely steep slopes that have little to do with realism and tend to ruin the fun of the battle. Think the uncharted planets of the first Mass Effect on steroids and you’ll have an idea of what I mean. Cruising on those with the Mako was a pain, and crossing the mountainous areas of Mount & Blade: Warband on horseback is equally  aggravating. Obviously the problem can be avoided by steering clear of such areas, but sometimes it isn’t possible, turning the subsequent battle into a chore. 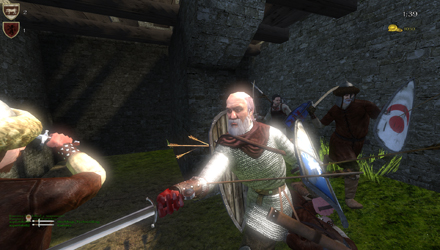 My gaming beard is better than your beard.

Riding towards the sunset to glory or death
One of the biggest selling points of Mount & Blade: Warband is its longevity. Going from the very start of the game to the complete conquest of the world can easily last you 150-200 hours, and the re-playability value is extremely high. There are so many things to do that you’ll probably find yourself creating several characters, allying with different factions, making different choices and so forth. I don’t think it’s far-fetched to say that M&B: Warband has the potential to grant the player thousands of hours of entertainment, and I mean just with single player dynamic campaign.

Mount & Blade: Warband is not a perfect game, as it often suffers from the low budget and the undersized development team, but it’s still a completely unique experience, something that you can’t find anywhere else in the gaming market. It also offers more gameplay than most games out there, even and especially those high-budget games that get most of the media attention.

If you’re tired of elves, magic and orcs, if you like the middle ages, if you love sandbox games, if you’re looking for the most entertaining and challenging melee combat system in gaming, or for some of the most epic battles to ever grace a computer screen, then you owe it to yourself to give Mount & Blade: Warband a try. The easiest way to get it is on steam. Seriously, it’s worth every penny.