Until now, Telltale Games have utilised established intellectual properties to form their catalogue of games, including the likes of Wallace and Gromit, Sam and Max, CSI, Strong Bad, Monkey Island and soon to be Back to the Future and Jurassic Park. However, as part of a brand new scheme they’ve entitled the ‘Pilot Programme’, Telltale have completed their first ever unique intellectual property with the help of the team behind ‘Tales of Monkey Island’ and Graham Anabele (who worked on the storyboards for the animated feature, Coraline) as creative consultant.

Essentially, the Pilot Programme sees Telltale compile an episode and, based on fan response and acclaim, will gauge whether the popularity is significant enough for them to consider further entries in the series. Puzzle Agent is the first of such games, and is based on an agent named Nelson Tethers who is part of a division in the FBI known as ‘Puzzle Investigations’. Nelson is a super sleuth who certainly knows his way around a sudoku puzzle, and TTG have him caught up in an investigation unlike any other which will utilise every fibre of his mental faculties.

The question is, should Nelson have stayed hidden in this secret division, locked up in the deepest recesses of the FBI? Lets find out…

So what does it take to be in the FBI?

The game starts with Nelson sat at his desk trying to solve a crossword puzzle. The day has clearly been a long one as Mr Tether’s eyes are drooping and he is reliant on the bowl of chewing gum on his right to keep himself awake and concentrating. Soon, however, the lure of sleep becomes too much and Nelson crashes face first on his desk and is away with the fairies. During his dream, Nelson sees an individual in a space suit approach his desk, Nelson faces the astronaut alarmed, flummoxed as to how or why one would be in his office. As he tries to get his head around the very thought, the astronaut seems keen to introduce himself, raising the mirror in their helmet. Nelson startled, struggling for breath, wakes up with a start before we find out who the individual is and sees that his beloved crossword puzzle has been shredded into multiple pieces. It is here we’re introduced to the meat and potatoes of Puzzle Agent’s premise; puzzles!

The game itself has borrowed heavily from the likes of Professor Layton, with Telltale themselves openly admitting it. As Layton has proven to be such a hit with DS owners, that’s definitely not a bad thing either. The first puzzle of the game sees you try to rearrange a crossword puzzle that has something written in red ink all over it back into a legible form. The puzzle is fairly straight forward and serves as more of an introduction to what you’re going to be doing throughout the course of the adventure. Solving the puzzle will mysteriously reveal the word Scoggins to the player. Seconds later, Nelson gets a call from his boss to tell him to investigate a mishap at a factory in the town of Scoggins, Minnesota. Perplexed at how all of this seems to tie up, Nelson thinks there is only one thing for it, shrugs his shoulders, and takes to the snow-sleigh to make his way through the snowy suburbia. 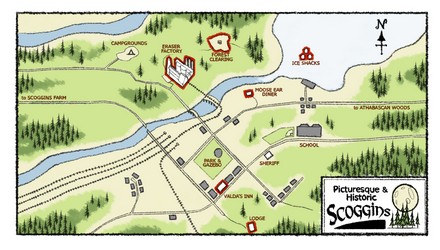 The lay of the land

As you would expect, the puzzles increase in difficulty the further into the game you get. Players will go from piecing together a crossword to configuring fuses and putting bugs in matchstick boxes. There’s a real mix of head scratchers in this game and they will definitely keep you on your toes. Don’t worry, Telltale have been very forgiving in the way that you can always get some help. Nelson chews gum in order to help him concentrate on puzzle solving and this helps him focus on the task at hand, enabling the player to get a hint. This goes from a minor hint, to almost completely spoiling the puzzle for you (although Telltale never completely give the game away). However, every time you use a hint, it will go against your record which you have at the end of completing every puzzle. The record also takes into consideration how many attempts you’ve made at the solution and then give you an overall score for your performance, whether you’re a borderline puzzle solver or a top agent! 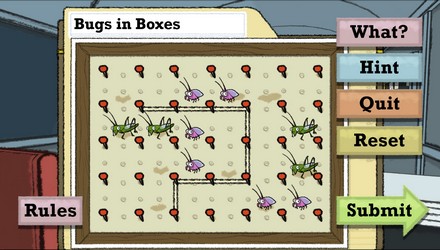 So being an agent isn’t all about action?
As always, the game’s control is handled via a cursor on your screen and you will interact with ‘hotspots’.  However unlike other point and click games Telltale have done, a simple click of the mouse sends ripples out on the screen, like a sound wave and depending on if you’re in the right area, will highlight the areas you need to interact with. So, a looking glass will appear if you need to examine something or a speech bubble will appear so you can talk to another character. Usually, when Nelson goes to examine something, he will pull out a tape recorder from his coat and speak into a dictaphone, considering it a clue for his investigation.

You’ll also find chewing gum scattered across the game. Every time you click on the gum, Nelson will gather it and this will allow him an extra hint when he is puzzle solving as I previously alluded to.

Its not all it appears to be.
As you can see from the pictures above, the game is hand drawn and is more of a 2.5D experience which is another new approach for TTG and is a real rare treat in this day and age of 3D gaming. Once again, Puzzle Agent dares to be different and pays more of an homage to point and click games of yesteryear than those we see today. As the game art is hand drawn, new freedoms are opened up to both developer and player. For example, facial expressions seem less stunted than in 3D games and there is a more personal flair to the game than anything TTG have done to date.

One may argue the environments in Puzzle Agent are especially bland as the majority of the game takes place in the snow, but that only adds to the atmosphere of the game, as we’re led to believe that this little town is remote and yet there is a much more sinister undertone to its day to day living. While the environments are snowy, they are also quite dark and gloomy and is very easy to compare to the likes of Fargo in terms of how it looks and feels. 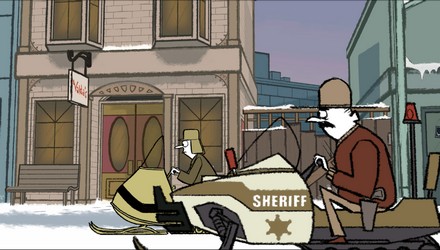 Unfortunately, there's no co-op in this adventure!

So is it all authoritative barks?
Nelson sounds like a bit of a weed, but that’s sort of the point as this is an agent more comfortable with textbooks and lateral thinking and doesn’t like being thrust into the thick of danger. As an agent, Nelson is quite jumpy, he doesn’t trust anyone and whips out his tape recorder at a moments notice whether the clue is relevant to his investigation or not. The voice acting suits completely as it does for the Scoggins natives, some of whom treat him as an intruder and others overly welcoming.

The tempo of the music in the background is also a real draw. While Nelson seems weedy, TTG have managed to create a legitimate tension in Scoggins that makes you believe we’re not being subjected to the paranoid machinations of a jittery protagonist. They really make the place seem to be quite frightful, and that only the residents are the ones who truly feel comfortable being there. There’s a real dark vibe coming from the music in this game that is reminiscent of things TTG have done before, but also shows that they’ve gone in a completely different direction with Nelson Tethers. They’re really trying to distance themselves from the games they’ve done in the past and to prove, point blank, they can do the weird and the creepy as well as the cartooney, cutesy and zany. 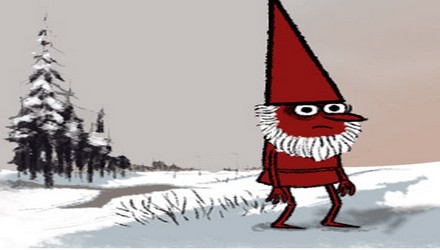 Definitely of the weird and creepy category

So is this a puzzle worth being solved?
This game isn’t going to be for everyone, but that seems to have been a battle Telltale Games have been fighting since their inception. Certainly the Professor Layton games have proven to be exceptionally popular and this game is focused on anyone with even a passing interest in that market, as well as anyone who has played a TTG title before. There is enough variety in here that’s going to appeal to many people.

The puzzles vary enough that they will challenge every ounce of your grey matter, there are side puzzles you can tackle if you want a break from the main story and when you want to jump back in, the main puzzles slot in very significantly with the plot (of which there is a good one). On the other hand, if you’re coming into this game expecting your normal Telltale product, don’t. While it’s very geared towards story and dialogue, this game is all about the puzzles. There is limited investigating here; there is no inventory, just a case file filled with previous puzzles which you can replay to improve your score and the story which is fairly easy to progress as the game will either tell you what you need to do or there are a limited number of objects to interact with to begin with.

Ultimately, Nelson Tethers certainly deserves more of Telltale’s attention as its a complete deviation from what people expect and really does stand up with the likes of Professor Layton as the story is quite dark, mysterious, gloomy and even sometimes downright sinister. Telltale have learned a lot from their previous forays and have been able to create a myriad of brilliance in Puzzle Agent. This is a great value game that will keep you puzzling for several hours and has a good storyline to boot. If the thought of finding a rubber band in a persons stomach through a slithering tapeworm or assigning birds to carry sacks full of gnomes tickles your tastebuds, you won’t find any more refreshing an experience than Nelson Tethers: Puzzle Agent!