I always said that in today’s modern technology age, a venture back into 2D platforming games could only be a good thing. Back in the 16bit heyday, developers were somewhat limited by the architecture the systems had at the time, and the 2D platformer was the most that could be technically accomplished. We aren’t limited by such constraints nowadays, but like some video-game revival, we’ve nonetheless had a good few in this classic genre released in 2011.

Ubisoft’s Michel Ancel has thrown Rayman back into the arena, and this time there are no pesky Rabbids in sight; in fact it’s more akin to the classic 1996 PS1 side-scrolling platformer we all loved. What has modern technology bought to the plate in terms of freshness, though? Is Rayman Origins a prime example that the days of 2D gaming are far from death?

Snoring is the catalyst

Rayman doesn’t exactly have the most dynamic plot line ever, but neither has Mario. He has to save Princess Peach; conversely Rayman has to rescue the world from evil creatures and darktoons whom are wrecking havoc across the land because you and Globox snored too loudly. That’s correct; your snoring woke up some pesky and horrible minions from under the Glade of Dreams. Your quest is to travel to each world and put things right.

Electoons and Lums?
You would expect nothing less from the brainchild of Ancel, than for him to throw in some odd-sounding names for characters; forget the names, though, as some of the characters in Rayman Origins are just strange in themselves. The core principle of this platformer is essentially to save Electoons from locked cages and to wade through the ever-increasing strange enemies that you encounter throughout the game.

Saving enough Electoons will grant you access to new levels, and collecting enough Lums will unlock more Electoons on each level. Needless to say, with these unlock thresholds through collection and speed-running levels, it presents a huge amount of replay value, especially since some of the trapped Electoons are in hidden areas within the level. What Rayman tends to do is take the best bits from stalwart platformers such as Mario and Sonic, throw in some bat-shit crazy level design and amazing ambience, and then present it in such a way that Nintendo and Sega could arguably only dream of. I will get onto that later… 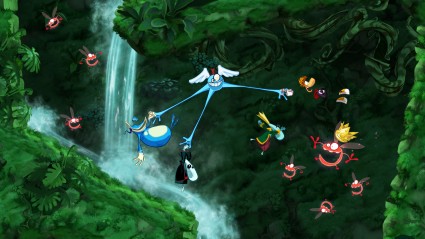 Those floating things are lums...

Of course Rayman and his fellow characters can all jump, but as you progress you will unlock the ability to dive, hover and shrink, to name just a couple of the skills you will possess by the end of the game. To throw variation into the mix, when you unlock more Electoons, at the end of each level there will be a shoot-em-up section which takes place on-board a mosquito, and a boss section. For each world there’s also a crazy speed-run level where you have to chase after a treasure chest to win some ruby teeth… trust me; it will all make sense when you play the game yourself. Getting more Electoons will also unlock more playable characters, too.

A visual fanfare of game design
If a video-game has ever blown me away in the graphics and presentation department, it has to be Rayman Origins. Each world has its own unique nuance, from traversing desert areas where wind will propel you; frozen landscapes where you’ll slide down icy lanes whilst breaking through wades of ice cubes; to killing fire-breathing chillis and swimming in the lower abysses of the ocean, being kept alive by the light of glowing fish. I simply have not even touched the surface of the invention and satisfaction this game world possesses.

As for the graphics themselves, the bold hues ooze your HDTV to life. Everything is so crisp, so richly detailed, that it turns your television into a visual canvas. Rayman Origins is running on its new Ubisoft Art engine, which I can only hope is used in future releases. Needless to say, it pushes the visuals in places neither Sonic Team or Nintendo have ever gone before. It is essentially the best-looking 2D game I have ever witnessed, in all twenty-two years of playing games.

Music to your ears!
In case you have not noticed yet, I am singing Rayman Origins a heap of praise, and I may as well come out of the box now and say that this game will be down as my game of the year. One area that deserves special mention is the game’s soundtrack. It is a rich experience to say the least, with all-original composition and an impeccable amount of variance from world to world. From dance beats to aboriginal vibes, straight through to Loco Roco-esque lounge notes, this game has it all.

Do not be surprised if you see Rayman Origins nominated for best soundtrack or best audio many times throughout video-game award ceremonies over the next month, as it is nothing short of epic. Everything fits and syncs beautifully, and the composition is constructed perfectly to accompany the richly detailed environments you traverse, float, flutter and bounce through. 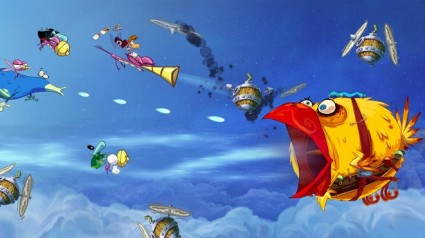 The shoot-em-up levels rival that of Ikaruga and R-Type in fun factor.

Why go alone? Have a foursome!
Rayman doesn’t just give you a single-player experience. It delivers you up to four player simultaneous co-operative throughout the whole game, and what’s more, people can jump in and out when they please. Multiplayer throws in some strategy elements by changing some objects in the game world to make you carry out certain actions, ensuring that you get all the coins, contraptions and switches along the way.

If you die you turn into a bubble; your team-mate need only pop the bubble, and you are back in the game. It is nice and simple. Whilst we talk of death in Rayman Origins, the game has no lives; you will restart from a designated checkpoint, which is something that works incredibly well in this game.

Entering into the hall of fame
Rayman Origins is a big, big game for Ubisoft. Bigger than they ever expected, because it has put Rayman on the map with the likes of iconic characters such as Mario and Sonic. The game poses perhaps the most influential multi-platform character on the marketplace at the moment. 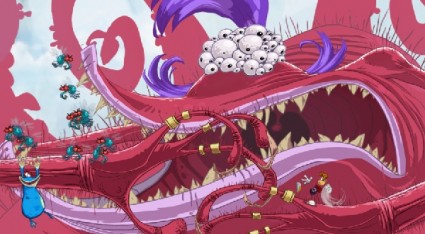 The imagination truly is bedazzling in this game.

You will smile, you will get frustrated, but you will be absolutely absorbed by the worlds developed by Ancel and his team at Ubisoft Montreal. Rayman may be seemingly ignored by the commercial gamer, the Uncharted and Call of Duty players of this world. If you pass this game up, however, you are completely mad. Rayman Origins is not only one of the best games of this year; it is one of the best games of this console generation. Believe the hype!