Sonic the Hedgehog is undoubtedly one of the gaming worlds most iconic characters. With a history of over 25 games in twenty years the series has pushed the boundaries of brilliance and also thrown up some complete turkeys. Sonic Colours is the latest entrant to the Hedgehog’s catalogue and in a bizarre twist of fate is exclusive to the Nintendo platforms of Wii and DS.

At a time when everyone is going Kinect mad it is fair to say that the Wii could really use a big Christmas title, so the question is can Sega’s big gun give Nintendo’s console a lift or does Sonic Colours just put another nail in the Wii coffin? Read on to find out.

Wisps it all about?

Sonic Colours is played out in the backdrop of Eggman’s new “Interstellar Amusement Park”, an interplanetary theme park that the mad scientist claims he has created to make up for all his previously failed plots to destroy anything cute and fluffy.

On arriving at said park, our Sonic soon discovers that the evil one has ulterior motives and is actually harvesting an alien life form called Wisps. These little fellas from a nearby planet (rather surprisingly called “Planet Wisp”) carry an energy that can be used in a variety of ways depending on their colour. It falls to our spiky Blue hero to return them to their homeland and foil Eggman’s plot yet again.

2D or not 2D
The Wii game supports a variety of controller configurations including N64 and Wii Classic controller. The default is Wii remote and Nunchuck so that is what I have taken to and will refer to throughout this review. The Nunchuck analogue stick controls Sonic’s movement and the A button is used to jump and can be double tapped for a double jump. Also, when in the air you will get an automatic lock on to an enemy or interactive object and in these situations a second press of the A button will fire your bundle of blue at said object. Sonic can also slide via the Z button and, if he has some standard White Wisp energy), boost with the B button. 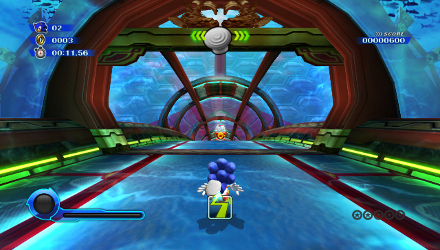 3D acts can be a touch awkward

This leads us nicely in to what sets Sonic Colours aside from previous titles, the Wisps. As mentioned before Wisps have an energy force that when released gives our hero a boost. They can be found in various spots around the worlds sardined into cages by Eggman. Simply jump into the cage to release the Wisp and gain its appropriate power. The standard White Wisp is found in every level and gives a simple boost that can be used to jump further or run quicker.

Besides the White Wisp there are seven different coloured aliens to be found, each of which unlocks a different power. Once you have collected the power a simple shake of the Wii remote will release it and transform Sonic appropriately. These are quite varied and range from a laser that lets you aim at a given point and ricochet around the level until the energy expires, to a Rocket that will fire you straight up in the air to otherwise unreachable areas. You can also burrow underground and through walls as a drill, fly with the hover power, climb walls and traverse ceilings or convert rings to blocks and vice versa. Then there is the Purple Wisp; this is a violent little alien that is almost entirely under the control of Eggman but should you release one, you transform into something of a beast that can chomp through obstructions and leave enemies quaking in your boots.

The game is played out over some six main worlds, each of which has six acts and a boss battle. The levels change from 2D to 3D sections and back again at fairly regular intervals and the puzzle element varies depending on the structure. The worlds are extremely varied ranging from the training level of the amusement park, filled with balloons, to your customary underwater world “Aquarium Park”. My personal favourite is Starlight Carnival which has you racing among the stars and across spaceships. Each act has the customary rings to collect alongside the Wisps and also five Red Stars which open levels in the Sonic simulator mode, which can be played alone or with a friend. Obviously no platform game would be complete without some total frustration as you over jump moving platforms or get stuck working out a boss pattern and Sonic Colours is no different. These moments of frustration appear almost entirely in the 3D areas but at no point have I got to a stage where I have even considered switching the game off or launching the remote. 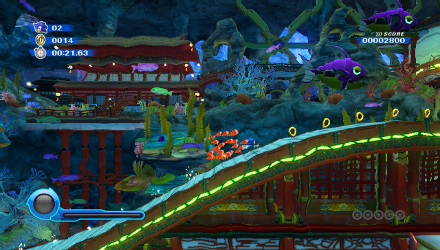 Who knew Hedgehogs could swim?

Colours of the rainbow
Sonic Colours has everything you expect from a platform title; big, bold colours, cute characters and some entertaining animations when you leave your controller idle for a few seconds and in the cut-scenes. The depth to the levels is fantastic with some truly grand arenas on show. The game flows superbly with seamless transitions from 2D to 3D and back again and Sonic’s trademark speed is rendered without any issues.

The cut-scenes are also well presented and do an excellent job of progressing the story without damaging the flow of the game. Overall I will say in complete confidence that this is the best looking game I have seen on the Wii in the three years I’ve owned one.

Sonic boom
The audio is also very much as you’d expect from the genre with some funky, jazzy background tunes that do a good job of adding to the atmosphere of the level. In the main arena map you have the addition of a travel guide who welcomes you to the Amusement Park and offers some insight to the world you have highlighted. Voice overs in the cut-scenes are well delivered if a little cheesy and sound effects are crisp and sharp throughout. 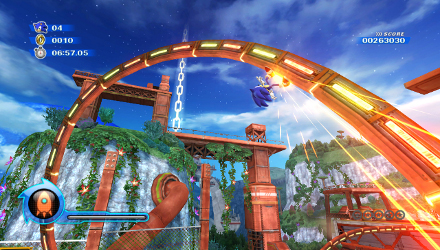 It wouldn't be Sonic without a few loops

Double trouble
Multiplayer is limited to local play for only two players and is played out in the Sonic Simulator. This is a virtual world within the main game that can also be played alone. As far as multiplayer goes you have the option of 1.5 player, where one of you is idle until you swap positions or two player games where you work together. The game is played in Lego style arenas and allows you to use your Mii or Tails as opposed to Sonic himself should you wish.

Unfortunately this is one of the game’s negatives for me as it just doesn’t offer much to the overall package. As much as it is nice to be able to get a friend to enjoy the experience with you, the Sonic simulator doesn’t really achieve this as it plays in a completely different fashion to the main game. Personally I would have much preferred to see the addition of a multiplayer aspect in the main game levels at the cost of the Simulator, which generally adds little to the experience overall. 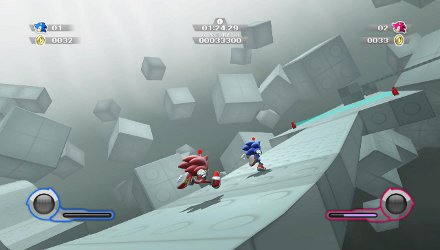 The wonder of blue!
I have been genuinely blown away by Sonic Colours. The game is full of variety, contains a solid challenge and is basically just good fun. The levels are well designed too, offering a genuine replay factor as you unearth the Wisp power required to unlock an extra area and discover new treats. The only blot on the title is the somewhat flimsy multiplayer.

The biggest compliment I can pay to Sega is that my Wii gathers dust from January to December, coming out only on occasions when friends or family are over for some Wii sports style entertainment and this game has changed that. I’ve actually found myself putting the Wii on to play Sonic Colours ahead of switching on my Xbox 360, a situation that I had not even considered possible as little as a few weeks ago. If you have a Wii you have to get this!