The influx of fitness games on Kinect continues with THQ coming to bat this time. While you breathe a heavy sigh of dismay, fret not, as I may be able to allay some of your fears. You see, The Biggest Loser might just be the biggest surprise in the Kinect launch line up. Yes, it’s a fitness game but it also innovates in amazing ways that open up new doors of possibilities for the tech. THQ have broken the mould for what is conventionally thought of as a fitness game and have introduced this to Kinect in an unexpected little package.

How did they do it? Read on to find out…

Yet another fitness game?

On paper, this is just another fitness game (although you might be forgiven for thinking The Biggest Loser was about a down and out street urchin attempting to change his fortunes in a rags to riches story; it’s not!), however, this game really does have some genuine surprises hidden up its sleeve. They may not be the best tricks on the block, they may not be the most polished and refined, but they’re clever, they’re exciting to watch and they force you to consider things in new and interesting ways.

As expected, the game follows on from the television show of the same name and studies a series of individuals who want to shell a few pounds and be the ‘Biggest Loser’ among them. The game features the rather fit (and healthy!) Jillian Michaels who will spend a lot of time giving you instructions and setting you along the right path.

…and one, two, three and four!
The Biggest Loser has an in-built career mode and does use a very similar engine to other THQ games. You create your own character (not the most in-depth character creation system you’ll have ever seen but there’s enough here to enable you to differentiate between game characters) and then you actually take part on the show. This involves using various mini-games against a series of other AI controlled competitors on the show. The games include types such as throwing as many punches as possible at a punching bag and other aerobic type efforts. This is a really cool unique twist on losing weight and uses THQ’s vintage career mode flair that has been put to good effect in the likes of Smackdown vs Raw and UFC Undisputed. While it’s not as developed as either of those titles, this again shows the possibilities that could be in store for fitness games in the future. Take note devs!

Let’s keep the ball rolling. You’ve got your typical exercise regimes which are tailored to your dieting form of choice and some strenuous exercises that will get your sweat on, but that’s not all! For starters, you can record a video journal each day based on your in-game and exercise progress and view them back as a motivational point for you to continue working to your full potential. The game will pose a question to you and you can answer it as candidly, openly, honestly or mockingly as you like. Just like the real TV programme, the game really does offer some clever details and makes you feel, not only as if you’re part of the show, but that you’re actually being pro-active in attempting to lose weight.

Of course, this doesn’t work as wonderfully as it could/should. I was stood at an appropriate distance from the Kinect camera talking to it, and not only was my voice quiet but it was distorted, jumbled and barely recognisable. This is down to the game’s coding as evidenced by how responsive the voice activity is by surfing the dashboard or recording a living statue in Kinect Adventures. Also, the videos are over very quickly, although you can do some test vids, before submitting your finished entry. In theory this is an excellent idea but unfortunately does suffer from poor execution.

In addition to this, the game also offers a ton of pre-designed recipes that can be used as part and parcel of a healthy, balanced diet. The game offers recipes for starters, lunch, tea, snacks, even drinks and lists all types that you have to create from scratch. Not only does this save you from going out and buying an overly expensive cookbook but it also adds further credence in calling the game a health and fitness package as opposed to an exercise game. Some of these even sound appetising, so that’s got to be a plus. The game will show you a finished picture of what the dish should look like and list the instructions on how to make it, what ingredients you’ll need and even how it should be served. Very cool! 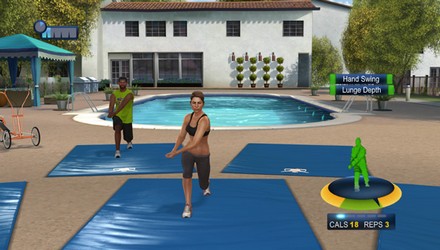 During the exercises, your trainer will ask you if they’re pushing the pace too much and if you’re keeping up. You’ll be able to select from three options and actually have to shout out your answer back to them (almost as if you’re having an actual conversation). The answers range from ‘This is too easy for me, push the tempo sucker!’ (That’s not a quote word for word), ‘You’re not going to fast for me, I can handle it’ or ‘Please stop I’m dying… WATER, WAAATER!’. Sometimes, this can add to the exhaustion as you’re in the midst of a particularly tense exercise and they’re asking you if you’re a man or a mouse!

Although, when you actually go to take a water break and it’s a bit longer than the game wants you to take, the trainers will just carry on the exercises even if you’re not in the play space. Frankly, this is a silly mistake and they could have simply paused the game or at least waited until you were back in front of the Kinect camera before carrying on with the regime.

However, unlike Your Shape, the game has some real intensive exercises and does require you to do sit-ups, press-ups, crunches and the like. The Biggest Loser has no fears in sending you to the floor, although, I found the Kinect sensor struggled to pick me up as I was sprawled out to attempt these exercises. Perhaps the tech isn’t quite ready for this yet, or perhaps the game just didn’t communicate with it properly. Whatever the case may be, this didn’t work out exactly as THQ planned. 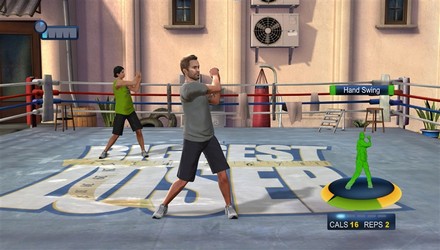 Keep it up and see the results!

Looking at things in a familiar, yet different way
The Biggest Loser uses a familiar THQ engine seen in the likes of Smackdown or Undisputed. It’s not the best looking engine out there today but it’s more than sufficient for the game at hand. Naturally, just like Your Shape, The Biggest Loser shows the trainers performing the exercises to precision and you, the player, need to replicate that just as accurately. A coloured silhouette of you is represented on screen to show your activity and to show how you’re getting on in-game. The silhouette turns green or red (a bit like Your Shape) to show whether you’re getting the exercise right or wrong. Depending on the colour, the quotes you’ll get from your trainers can change, whether it’s a piece of advice on how to improve or an inspirational quote to press-on.

It’s also worth pointing out that navigating the menu is quite a clunky affair and while  not on par with the awful Fighters Uncaged, does not make for much of a pleasant experience.

Familiar sounds
All the original voices from the show are included in this package, that includes Jillian Michaels and Bob Harper. Even Alison Sweeney, the commentator plays a crucial part in the game’s proceedings. They’re going to treat you in the same way they’d treat anyone else, so if you don’t like it, then lump it. They’ll treat you hard but they’ll also offer hints and tips during loading screens and try to get you ‘in the zone’. The voice effects sometimes come across as being a bit wooden and soulless, but sometimes have an edge to them that can really kick you into shape when you most need it. 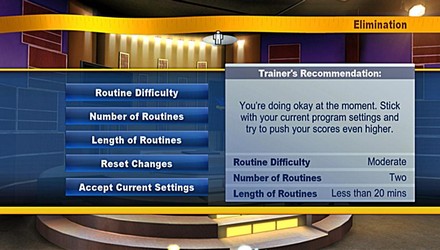 This game really does pay attention to you!

Wearing thin?
This is such a bold, bright effort from THQ. They’ve done some incredible things with this title and actually made it a genuine fitness contender. It definitely provides enough inspiration for its successors in the future. That being said, the game isn’t without flaws and many of its bright ideas simply haven’t connected properly with Kinect and needed a bit of extra time in development. This is an excellent substitute game for Your Shape (if you already own Ubisoft’s fitness frenzy or you didn’t enjoy it). I do recommend the Biggest Loser, it’s an intense and clever package, has a lot of surprises underneath the hood and does give very generously. A few more months in development and this would have achieved its full potential. Unfortunately, in its present state, it is hampered by its own ambition.