Vin Diesel. Love him or hate him, he was everywhere a couple of years ago. With a successful movie career and even a stint as a writer/director (see awful, ghetto drama Strays), it seems the-man-who-has-a-name-like-a-fuel has now decided to turn his hand to making games with the help of developer Midway Studios. Well, starring in one at least. The Wheelman casts him as Milo, a surly driver for the criminal underworld, shipped to Barcelona for a job. Deciding to stay there, he engages in all sorts of car-centric japery with a few shooting bits thrown in. Is it any good? Yes and no. With a movie planned for release in 2010 as a follow-up, the success of this game will be a good judge as to whether the movie will be worth watching. I for one am about as excited as a pig being led to slaughter, and i’ll tell you why…

Wait, there’s a plot?
Far from a Scorcese masterpiece, the plotline meanders along at a snails pace with no real direction or overarching goal. Events and scenes are loosely threaded together, seemingly at random, giving the storyline a broken and uncomfortable feel. While the individual tasks and missions usually make sense, their relevance to the plot is never apparent. It feels like The Wheelman was written as an excuse to stick Vin Diesel in a car and let you drive him around, smashing stuff.

The titular wheelman himself is the most one-dimensional character I’ve seen for a long time. He has no backstory, seemingly plonked in sunny Barcelona for no reason. This is no bad thing; many of gaming’s greatest heroes have mysterious and/or shady pasts. The issue here is that Milo is never fleshed out. He just grumbles from one boring cut-scene to the next, yes-ing and no-ing his way through tasks and missions. He has no apparent morals or loyalty, simply driving for whoever’s paying, and instead of making him a devil-may-care free rider, this only serves to make you think he’s a dick. With no classic dialogue, an expressionless face and an amazingly nonchalant attitude to pretty much everything, Milo is a character few will want to play, and even fewer will care about. 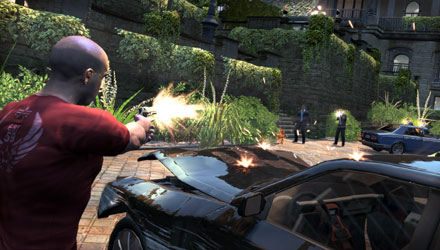 By this point, you'll wish they let you stay in the car...

So you drive and shoot… oh, that’s it?
I’ll start by saying that, while on the surface The Wheelman may bare strange resemblance to Rockstar’s legendary free-roaming series, it is absolutely nothing like Grand Theft Auto. Sure, there’s driving and shooting, but of a very different variety. Just like football, it’s a game of two halves and both parts don’t always go so well.

First, the driving. Taking it’s cues from Burnout and throwing in a healthy dose of Outrun, handling a car is fun, fast and furious. Accelerating and steering are standard, albeit with a refreshingly arcade feel. Milo is in Barcelona for one thing; to drive, and this shows through his expert handling of practically every vehicle on the road. There’s no awkward, Niko Bellic-esque slides, under-steering and braking on corners here. The Wheelman is a badass behind the wheel and this affords him some interesting abilities. Vehicle melee allows you to, through pushing of the Right Stick, to shunt enemy vehicles into walls, other cars and off highways. This makes the driving experience all the more cinematic, as you pile an SUVs into sedans and watch them careen off the road in spectacular fashion.

Driving fast and dangerously builds up a focus meter, which can be discharged in a variety of useful ways. Aside from the standard boost, Milo can bust into slo-mo and take targeted pot-shots at enemy vehicles to weaken their armour and even destroy them. While the standard aimed shot is nothing special, the bizarrely named Vortex Shot sees Milo spinning the car 180 degrees and shooting enemies behind him, before dragging the car back round to carry on driving. If you thought that was unreal, wait until you air jack. Using the B button, you can leap from your car onto a target car and hijack it. While it’s still moving. Ridiculous as it may sound, this quirky move is actually a saving grace, allowing you to switch to a new ride when your current one gets too bashed up. All these moves, along with the superb general handling, make the driving in The Wheelman a joy. It’s a shame, then, that the on-foot sections suck so bad.

Guiding Milo around shooting goons is about as fun as pulling your toenails out with a rusty pair of pliers. Bland, thick enemies pour out of spawn points, rushing to your location without even a thought of tactics. Even when they occasionally duck behind cover, they mostly choose to reload out in the open, giving you time to drop them easily. With an awkward lock-on and no cover system, you’re forced to trust said lock-on and crouch behind obviously placed objects to avoid fire. Most of the weapons are uselessly inaccurate, leaving you to pump round after round of slow-firing, weak pistol ammo into your targets. It’s textbook whack-a-mole game-play, and feels like filler from start to finish. While it’s nice to break up the driving, The Wheelman has managed to get simple, 3rd-person shooting very wrong.

One more thing to mention; the difficulty. While it starts off smooth and enjoyable, drip-feeding you abilities and features as well as new enemies and styles of objective, The Wheelman spikes around halfway through. This causes every mission to morph from joyful romp to miserable ordeal. Simple destruction jobs become impossible missions, with the game throwing infinite enemies at you. Many of the enemy vehicles are much more powerful than yours, regardless of what car you’re driving, and most of the enemies have unfairly good skills.

Take the bikers. They’re always just ahead of you, denying the use of vehicle melee. Get alongside them, and it takes a good five or six hits to down them. Try shooting them, and despite Milo’s supposed expertise, you must line up a shot for a good few seconds before you have a chance of hitting anything. The biker, on the other hand, can pump highly accurate submachine gun fire into you regardless of his situation and even drive the wrong way down the road while turning to shoot you and collide with nothing. Cars can melee you from three lanes across, while you are limited to a couple of feet. It makes for frustrating and upsetting game-play and ruins the game. Most of the time, you’re tasked with doing something else while fending off the hordes of super-baddies and there’s simply not enough time to deal with everything. It makes me angry that developers still think that shooting the difficulty through the roof and sending waves of solid enemies to horde you is a legitimate way of extending a games lifespan and creating supposed challenge. 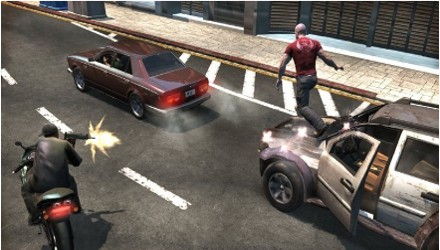 Sunny Barcelona
Visually, The Wheelman looks stunning and drab in equal measures. While everything is rendered in glorious detail, the city of Barcelona is apparently the most architecturally boring city on Earth. The same houses line all the streets, the same coffee shop on every corner. Store fronts look flat and lifeless, reminiscent of old games that cared not for realistic-looking locations. The main tourist attractions and monuments are, of course beautiful, but it seems to me that developer Midway have used up all their design time on getting these postcard moments right, and then copy-pasted the rest of the city together.

Aside from that, the car combat visuals are lush, allowing you to see every bump and scrape. Every car you destroy tumbles and shatters in a unique way and no encounter looks the same. The characters, while reasonably well animated, all seem to be made of plastic, shining in the Spanish sun like buffed-up mannequins. The facial animations are also sub-standard; I’m used to the detail of Mass Effect and GTA4, and expect that as the norm. So, nothing to shout about, but decent and functional.

Hey! It’s 8am on this sunny Tuesday morning…
Sound in The Wheelman is, again, brilliant and awful simultaneously. The engine sounds are spot on. The cars roar, being pushed under the foot of an experienced driver. The bikes scream, the trucks, er, trundle and it all fits nicely. There’s a satisfying crunch when you melee an enemy vehicle, and an even more satisfying boom when you finally destroy it. The same cannot be said of the shooting sections. The guns sound bland and samey; all of the four automatic weapons sound the same, albeit with slightly different fire rates. Explosions are weak and even ricocheting bullets sound like coins falling down a drainpipe. It astounds me that a studio could get sound so right in one aspect of the game, and fail so spectacularly in another.

The dialogue is terrible, badly written dross, which is due in part to the shocking script. Even so, the voice acting is not exactly Hollywood material; held up against something like Modern Warfare 2, the gangsters are more caricatures than characters. Milo himself sounds like he’s trying so hard to be tough, he instead sounds like a bored, 40-a-day smoker who needs a nap. Music is provided by an in-car radio, but if you’re expecting personality-rich stations, you’re out of luck. Six, genre-centric stations playing the same three or four songs on a loop with some poorly presented dialogue is your lot. Poor effort Midway.

As the sun sets on the Spanish hills…
The Wheelman isn’t an awful game. Difficulty spikes and weak on-foot missions plague it throughout though and prevent me from wholeheartedly recommending it. The driving is fun and, mercifully, makes up most of the game but is ruined by near-impossible missions and occasionally ineffective special moves. The story is practically non-existent, and I’m sure many of you will get bored before it’s through saying whatever it’s trying to say. With no overarching plotline, no twists or turns and not a single truth or revelation, it ranks as one of the most ineffectual and outright boring game storylines ever. If you can brave the monotony and crushing difficulty, there’s some fun to be had with The Wheelman. Just don’t expect it to be an easy or particularly enlightening ride…