Review: War of the Worlds

The imagination of Science Fiction allows us infinite possibilities, bringing with it compelling, thought-driven characters in search of far-reaching goals in completely alien environments. While many might associate such scenarios with the likes of Inception and Mass Effect, the times of Sci-Fi date back much further.

In 1898, H.G.Wells published The War of the Worlds which, at the time, was a ground-breaking piece and one of the first to deal with mankind’s conflict with an alien race. Since then, it’s been made into a radio drama, had several films made about it, numerous comic book adaptations and even has its own touring theatrical production.

Now, with Other Ocean at the helm, Wells’ classic has been converted into a platforming action/adventure, with full narration from Sir Patrick Stewart.

Is the subject matter still as enticing and relevant over 110 years since its initial publication?

Intellects vast, cool and unsympathetic regarded our planet with envious eyes…
Players are cast as Arthur Clarke, and the whole story is presented to us through sections of his diary. The game begins with Arthur walking a train filled with passengers, all deeply concerned with the events happening outside their window, flashing lights and alien vessels descending from the skies. The end of the World seems nigh, and nothing or no one can stop it.

Fearing for his own safety, and for that of his nearest and dearest, Arthur decides to journey to find his brother, hoping to outrun the alien threat along the way. However, just as the thought occurs to Arthur, the train is abruptly removed from the tracks, cartwheeling toward its own oblivion.

Awakening after the crash, Arthur seems to be its sole survivor. He feels an immeasurable gratitude for this mercy, and yet, despite how close he has already come to death, he still gambles his life in search of his brother, and takes a journey through war-torn London to find him. 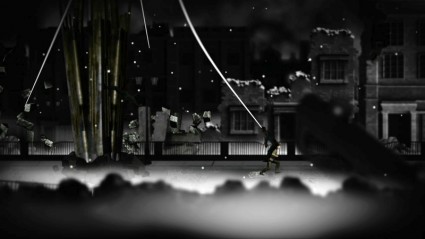 Arthur is in LIMBO...

They have come!
Other Ocean have created a scenario where our protagonist will mostly find himself on the run. It’s a rare occasion where your character isn’t suited and booted to the nth degree with awesome gadgets, an incredible immunity to pain and an unlimited arsenal of weaponry. Arthur Clarke is just a man with his thoughts and despair, but fortunately, with a bit of a spring in his step.

You’ll need to keep running through many sections of the game, putting together some forward rolls to build up the momentum, crouching underneath small spaces, climbing ladders and jumping between platforms. The writing of the game is such that there is always something exciting and interesting happening and it’s not necessarily the gameplay you will always find yourself most invested in.

The great thing about WOTW is that there is an incredible sense of urgency about it, and while there’s never an uncomfortable pressure on the player, they will be immersed into this fiction all the more, because they’re very aware of time restrictions and the necessity of being prompt to maintain survival.

As you might expect, there’s quite a high difficulty threshold here, and to make any sort of progress, you better be prepared to die. A lot. However, unlike games such as Dark Souls where the death cycle becomes increasingly tedious and utterly unenjoyable, the frustration isn’t always apparent here, as you feel as if you’re constantly developing and learning how to tackle the obstacle each time.

That being said, my massive criticism of the game is with its controls. They’re extremely clunky, and, at times, border on the unresponsive. It’s not uncommon for you to be running, tap the button and for you to either not jump at all, or to completely undershoot it. The majority of the jumps in the game are ridiculously precise, and require, not only impeccable timing, but for you to jump at the exact sweet spot, without any room for lenience or slack.

It also feels as if sometimes, Arthur isn’t even responding to the actions you’re performing on your pad. For example, I had an occasion where I was trying to reach a higher ledge, but because I wasn’t precisely in line with the ledge, Arthur didn’t perform a clambering animation and therefore, just stood there looking as if he was waiting for something to do.

To be honest, it feels as if the game would have benefitted for an extra months worth of testing the controls, if not longer, and unfortunately, because it hasn’t had that, it does let the game down considerably. Whereas everything else about WOTW seems right, the graphics, the narration, the writing, it’s the gameplay that really sullies the experience.

Don’t get me wrong, when the controls work, the game is a real rush, especially when you’re being chased by alien craft. Sadly, WOTW seems to have inherited many of the dated control frustrations of its predecessors from the 1990s. On occasion, it feels like it actually managed to come worse off for it. 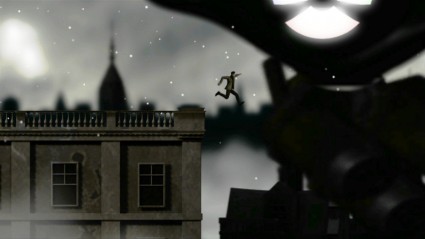 The game covers lots of areas in London...

They will prevail
The vision for this iteration of War of the Worlds is gloomy and haunting, with much of the scenery representing a ghost town, and a civilisation crumbling to its knees. People cry out for your help as you run past, others are killed right before your eyes. This is humanity on the brink of extinction. While the powerful imagery may chill you to the bone, somehow, you will find acceptance in it, understanding its callous methods, and making you more deathly aware of your own character’s vulnerability.

It’s equally fascinating that the only colour and semblance of life that seems to come across in the game, is brought over by the aliens and their spectacular vibrant projectiles. Everything else is bleak and grey. True ambience of a broken London.

The graphics are masterfully created, and completely suit the setting and the gameplay.

War is coming
I don’t need to tell you how elegant Patrick Stewart’s vocal prowess is. One only has to play Oblivion, or Castlevania: Lord of the Shadow, or to watch The Next Generation to know how much he enriches each form of entertainment he graces. The man is a true marvel and, as you might expect, adds an incredible amount of depth and substance to what would normally have been just another platform game. Without Stewart’s ongoing narration as you wade your way through a desperate London, your attention may be all the more drawn to the frustrating control scheme I’ve already highlighted. However, because the game bears its soul so bravely and predominantly, there’s little you can do to stop yourself getting caught up and captivated by it.

Stewart effortlessly narrates the thought process of Clarke through the entries of his diary, drawing attention to constant nagging feelings torturing our protagonist, the dawning of hopelessness, all the way through to key moments of inspiration. Much like Bastion before it, this is a masterful way of drawing a game into a whole other dimension of discovery, and opening wide many new narrative possibilities. 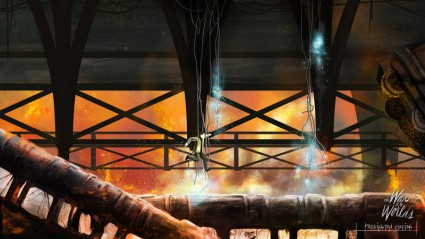 The only colour in the game comes from the Martians...

Beyond preservation?
What we have with The War of the Worlds is somewhat of a paradox. An engaging story fantastically brought to life by a quality actor, set against attractive 2D desolation, with accompanying tense, quality action sequences. Yet it’s dragged down by a hamperous control scheme that is unpolished and unbelonging to the 21st Century.

The War of the Worlds absolutely deserves to be tried by everyone who can access it, as it does a lot of good with the source material, but it comes with a word of caution. Get to grips with the controls; make sure you can deal with the handling and the pitfalls in their design. If you can get past those, what you will find is a memorable excursion that warrants several playthroughs, and awards with diversity, style and some of the finest drama and entertainment you can find on any arcade marketplace.