To people of a certain generation, the name “Worms” brings up certain memories, most of which involve huddling round a PS1 and throwing Sheep at each other. It’s hard to deny the success of Team 17’s most famous franchises, and its recent edition on the Xbox Live Arcade and the iPhone have been insanely popular. However there hasn’t been a version on PC for quite a long time; a situation that is being rectified with Worms Reloaded. Is it a wriggle to victory or an Armageddon?

As you’d expect from a game like this, there is no story. There is no explanation as to why these worms have insane weaponry or a desire to kill each other in a variety of different ways. However, have we really ever asked for this? There are, however, several different modes for you to play through offline. The first is a single player campaign, which has 35 different challenges ranging from standard worm-on-worm action to such things as propelling worms to a target point through the use of various items and equipment, which help to show new and different tactics above and beyond using them directly. There are also two never before seen modes: Warzone is based around the careful use of your armaments against eaves of increasingly hard enemies while Body Count is simply taking enemies out in the shortest time to get the most points. These alternatives mode will be something you probably play once or twice when you bored of quick matches or online.

2D Worms!
As you would expect from a game in the Worms series, all these modes effectively link back to the standard 2D Worms gameplay (lets ignore Worms 3D shall we?). You have weapons of various types. You must then choose the best tool for the job before selecting the necessary power in order to get it to hit where you want it to go. This style is tried, tested and known to just work. However, Team 17 have added a few things, the first is the addition of fire, which can subtlety change many a plan. Rather than having to hit a shot dead on, flames now mean you can nail the little git that’s on the other side of the dip thanks to the wind. Unfortunately, as it maintains the gameplay of the older Worms titles it can still have the same issues, for example, if you don’t get into the mind-set of aiming some of the weapons, you just won’t succeed. 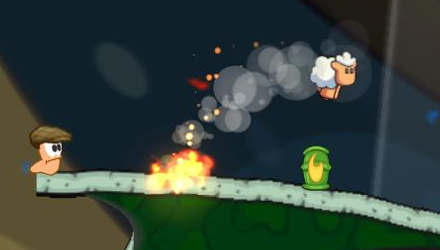 The sheep return and explode into lamb chops!

Worms Reloaded is based on Worms Armageddon, so brings over all the weapons from that and more. Alongside the staples such as the shotgun, bazooka, grenades and blowtorch, you also get some new stuff such as the Napalm strike, the gas canister and the great new sentry guns. These add a few extra new moves and are great to use. It is a shame that the excellent tutorial doesn’t cover some of the new stuff such as the Worship idols and the Electromagnets, which does make you your first few matches with them a pain. Players who don’t master all of them can be at a serious disadvantage when they jump in online.

One thing I have to point out is just how crazy the customise options are. In the previous games on the Xbox Live Arcade you had a load of control over what your worms are like, but now you can also change their headgear, victory dance, tombstones and even tone. On top of that there are also customisable modes and terrain sets. All of this customisation is slightly tempered by a store where in-game currency (earned by completing single player challenges) is used to buy new weapons, terrain and gravestones amongst other things. I’m not a great fan of locking away content in a customisation heavy game. Worse is that it locks away several weapons, which unbalances the online mode as those only interested in the multiplayer won’t be able to get these more powerful tools.

No greater pleasure than to see your enemies squirm before you!
The graphics in this latest version have to be some of the best in any of the games so far, including the version on Xbox Live Arcade. High Definition textures look really crisp and the Worms have really intricate detail you’d never see otherwise. This is combined with a great set of particle effects. The new fire effect is probably some of the best 2D fire I’ve seen. The rest of the weapons effects are also pretty good and are all as humorous as you’d expect from a Worms game. I should point out that as a PC game it is vital that you have the latest graphics drivers, as when I tried to play it with an out-dated set, it was unplayable.

Sounds Like Victory! Oops!
Unfortunately I have one or two slight niggles with the sound. Most of the weapons sound pitch perfect but some of the Worms voice sets are probably ripped straight out of the first game and sound rather low quality. This is a real shame, as the rest of the voices are brilliant with a whole bunch of humour. There is nothing funnier than hearing the world’s most terribly stereotypical Yorkshire accent saying “eh that’s grand” as you drop a bomb on your opponent’s head. The music to go in the background is pretty much the same as it always has, and isn’t really anything to write home about. 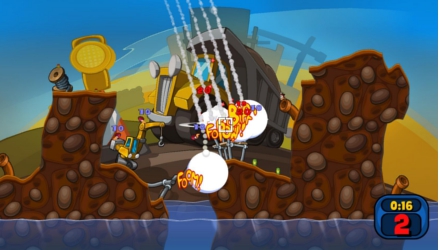 All for one and free for all!
As I’ve mentioned, the multiplayer is probably the best part of the package. So far I’ve had no issues with lag or anything while playing and it’s just been smooth. However, many of the games you get into are several rounds long so it’s not a quick “jump in” game unless you play a custom match. However, Worms is best played with four people around one screen and unusually for a PC game this is fully supported. I had a big group of friends play it all huddled round the PC and it was a blast. 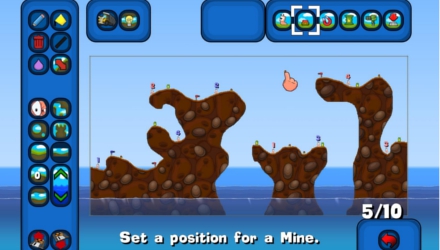 You like customisation? This game is full of it!

The Worms are indeed Reloaded!
Worms Reloaded takes the perhaps the best Worms game, and then brings it back to its PC roots in the best possible way. It has hours of content to enjoy, from the tricky puzzles of the single player to the brilliant online mode. For both new and old fans this has to be the definitive version. Team 17 are back in style.