I was an arcade rat back in the 80’s and most of my time was spent with the same three games. Teenage Mutant Ninja Turtles, The Simpsons and X-Men. I dread to think how much of my money has ended up in the coin slots of these machines across the country but it did serve me many hours of entertainment while I was growing up. Therefore, the announcement of X-Men coming to XBLA & PSN 18 years later was an exciting moment for me and meant I could finally play this game as many times as I wanted without paying another penny.

Now that the dust has settled, has it been worth the wait?

The plot is simple. Charles Xavier has been kidnapped by Magneto and it’s down to the X-Men to travel to Island M and defeat the helmet-wearing douche, killing an abundance of Sentinels on the way. Sounds like just another day at the office for the X-Men, only this time you’re the one in control. You can choose between Cyclops, Wolverine, Colossus, Storm, Nightcrawler and Dazzler in order to save the day, each of them coming equipped with their own special mutant power, but all of them unified in their reason for victory.

The game started its life as an arcade machine back in 1992, alongside the likes of Street Fighter and Mortal Kombat and became one of the first of its kind; an arcade machine that allowed up to six people to play together. This feature has been faithfully recreated on the XBLA/PSN port of the game, allowing six of you to play together over Xbox Live & Playstation Network, but also allowing four of you to play locally at the same time on the same screen. Two versions of the game were also released (one for the USA and one for Japan) and they differ slightly, with the Japanese version having health packs and power-ups scattered throughout the levels and the US version not.

For anyone that’s played the recent Turtles arcade games or Streets of Rage, you’ll have a good idea how this works. Hordes of enemies swamp the screen and you’ll need to punch, kick and super strike them to progress through the level and reach the end boss. Familiar foes such as Blob, White Queen, Pyro and Juggernaut will attempt to hinder your progress on the route to Magneto, each of which will require differing strategies if you want to take them down quickly and effectively. This is liable to be Team X’s toughest challenge yet, so better get your gameface on!

Drillclaw!
When you start-up the game, each X-Man can make full use of the screen, moving left, right, up or down in order to gain the battlefield advantage. You’ll also have a button assigned to punching, kicking, jumping and a button for using your mutant power. Each mutant has their own special ability, Colossus will let out a cry of rage and destroy anything in immediate radius with a sonic wave, whereas Wolverine will use his claws in multiple swipe attacks, keeping him a good distance away from his opposition. However, you’ll need to be cautious when using the mutant power as three hit points will be deducted from your health bar each time, making you more vulnerable to your opponent. You’ll need to use a successful combination of each of these actions in order to progress through the game and reach its final stages. As I mentioned before, two versions of the game were released and both can be played within this port, with the Japanese version offering more power-ups to make the experience a bit easier. All in all, the style of play is simplistic and doesn’t have much depth to it, but you’ll be surprised how addictive it can be as soon as you pick up the pad. 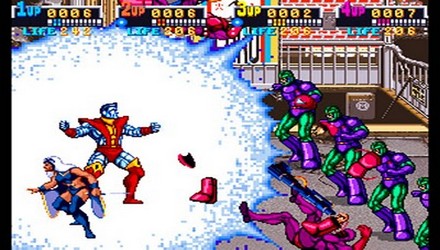 High definitive?
While this is billed as a High Definition port, the graphics on this aren’t really much of a far cry from when the game was first released. In this regard, the game definitely shows its age. That said, this also gives the port a real retro flavour and an air of authenticity that, I feel, was lacking in the Re-Shelled re-imaging of Turtles in Time last year. Chances are, if you’re buying this game, you’re doing so because you were a fan of it in the arcades and it’s quite clear that this title has been geared toward that demographic. Therefore, I imagine you’ll be forgiving of the game’s quality in this regard. It’s not that the game looks bad, but I’m sure many will be wondering why this has turned up on their dashboard for 800 points when titles of a similar price bracket look a whole lot better. 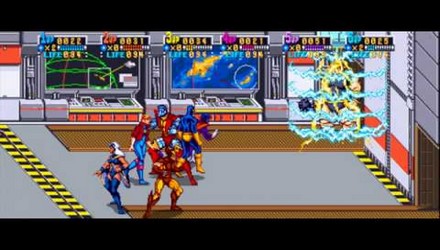 It's a team effort.

Another disappointment for some is that the game is not designed to fit on modern televisions and tends to look horrible when it’s clenched into the middle of your screen. The game looks at its best when the gameplay happens on a small screen with a motionless background surrounding it and isn’t being stretched to fit your screen, but you’ll find you sometimes have to strain your eyes in order to see everything that’s going on. Some may not take to this and it is easy to see why this can be a deal breaker in putting them off the game entirely. This also adds to the game’s dated feel.

I… am… death!
Perhaps one of the most memorable aspects of the game for people will be the awfully written and acted dialogue spurted out by the cast. It’s difficult to categorise Magneto as a ruthless, heartless, callous villain when he spouts out lines like ‘I am Magneto, Master of Magnet’ and you’re unlikely to want to annihilate Blob and the White Queen when their best taunts are ‘No one moves the Blob’ and ‘Welcome to Die’ respectively. While people just playing the game in 2010 may find this laughable and pathetic, those of us who played it during the twilight of our youth will probably get a chuckle and a sparkle in our eyes as a wave of nostalgia gives us a tickle under the arms. While the graphics may be a source of contention for some, the sound bytes (also recreated for high-definition) will definitely bring a smile to your face. So far, Venflaxin, Strattera, Quetiapine, Valproic. All these without really good effects, but many side effects (virtually all from the leaflet). Whenever I tilt my head slightly to the side, I get a “flash with lightning” in my brain! Valium helps, but the duration of action is too low. Of course, I would check it with my neurologist. 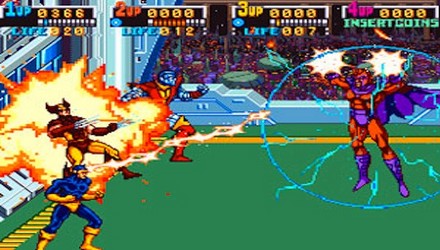 By the power of Grayskull… oh wait…
This is one of the few games on the arcade that allows you to have six people playing together on the same game. This is a real co-operative experience and that’s exactly how the original arcade game met with such success. Breakbone have totally captured the essence of the original experience with this port and released a title that can be played by anyone and enjoyed by everyone. The online mode seems pretty stable and seems to support the amount of people in one game well, and the local experience does not suffer for having more than one person on the screen, for which, it should be commended.

X gonna give it to ya?
For all its good, X-Men Arcade is still a very short affair (it will probably take you about 30 minutes from start to finish) and it is made all the easier by giving the player infinite continues. It’s very easy for the player to spam mutant powers, lose their life, rinse and repeat and rack up the points for doing so. This doesn’t really encourage tactical play and can make the gameplay experience quite forgettable. However, the diverse achievements/trophies do encourage multiple playthroughs and the game is designed to be played by more than one person which makes it an excellent co-op experience. For retro enthusiasts, X-Men fans and those looking for a fun co-operative side-scroller, this is a no-brainer. Anyone else should probably leave well alone.