Zuma’s Revenge is the latest installment of the popular Zuma series, published and developed by Popcap games. Like the other games, you play as a frog trying to form different combinations within the game’s puzzle system. The puzzle system consists of different colored balls, and the objective is to create chains of the same color. Will Zuma charm the player once again, or does it croak for air in a saturated mini-game market? Read on and find out.

The game actually begins with a loading screen. You are the iconic ‘Zuma’ frog, and you are drifting on a makeshift raft in the middle of a savage storm. Once the game is done loading however, the storm subsides, and gives way to a tropical wonderland of an island. Once you reach the shore, things start to go sour. You are confronted by a mysterious, cloaked figure. He goes on to tell you that there are five tiki chiefs on the island, and they will stop at nothing to guard their “mysteries”. This creates the potential for a great plot, and while I couldn’t finish the story for myself, for a smaller game it seemed interesting for a puzzler, if not too in-depth. 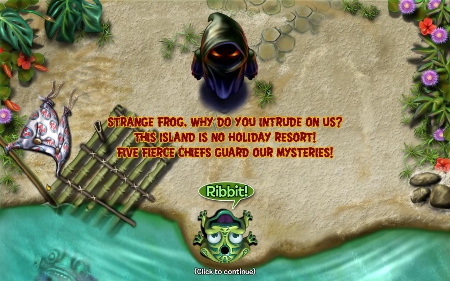 Gameplay; fun but frustrating.
Now, as you proceed through the island by way of levels, you will obviously come across these tiki chiefs. They are placed ten levels apart from each other, and like each and every level, they will become exceedingly difficult to beat. I made it all the way to a respectable level thirty-seven, and I daresay, that’s pretty damn good. Now, judging by how the regions flow, there are fifty levels. While the boss battles are much easier than the levels themselves, I’d venture to say that whoever gets to level fifty, and defeats the final boss is an absolute Zuma genius. The game does spare some part of your mind in the respect that you get three lives per every five levels. If you die you return to the latest interval at which you passed. These are placed every five levels. Yeah, so this is only the beginning of the level... and the balls are still rolling out.

Graphically fun or fail?
Now when you look at Zuma there’s no way you can say the art style is bad, and as far as ‘Zuma’s Revenge’ goes, you can’t say that about the graphics either. They are fun, vibrant, and clash well with the evil tiki citizens that inhabit the island. This lets the player keep having light-hearted fun, while at the same time be aware that there are evil tiki chiefs lurking at each ten-level interval. Another contributing factor to that statement is how each time you complete a level, the tiki chief that you are traveling towards will utter a phrase. This is usually comical, and more often than not, consists of adult humor. It’s well-placed, and hard to understand for the young audience who would more than likely love this game. Sound; sublime or sad?
The sounds of ‘Zuma’s Revenge’ are truly wondrous. They, like most other areas of the game, are very tribal and ominous, but at the same time keep that light-hearted feeling. Plus, they feel real, and well-placed. You don’t know what materials the balls are made of, but when they hit each other, they make the sound you would expect them to make. In short, the fidelity of sound in this game is very, very good.

What’s the verdict?
‘Zuma’s Revenge’ tries to keep alive that feeling of happy-go-lucky in video games, while at the same time relentlessly bashes our head against a wall. It’s one of those games that requires maturity but encourages immaturity. I enjoyed my playthrough of ‘Zuma’s Revenge’, however there were times I wanted to just quit and never come back. However, because the game is priced at $19.95, I’m going to give this game more credit. Fun, creativity, and a mix of childish and adult humor has earned ‘Zuma’s Revenge’ a ‘BUY IT!’ rating from me. So for all you tikis out there, go for it!