I’m no stranger to DrinkBox Studios’ releases. Whilst I found Tales From Space: Mutant Blobs Attack an enjoyable romp, Guacamelee! is genuinely one of my favourite Metroidvanias – and in fact, platformers – of all time.

Naturally I was excited to learn of Severed, the developer’s next project – and a PlayStation Vita exclusive, no less. Whilst what I found in its six-hour adventure lacked the endearing charm and whimsy of Guacamelee!, it absolutely featured the level of style and creativity which makes DrinkBox games so special.

In Severed you take the role of Sasha, who’s having a particularly bad day. Waking up in an alternative dimension with only a mysterious tooth-faced demon for company, she discovers her family has been kidnapped. It’s down to her, then, to rescue said flesh and blood whilst looking for a way back to her own world. Oh, and her left arm has been chopped off, just to add injury to insult. 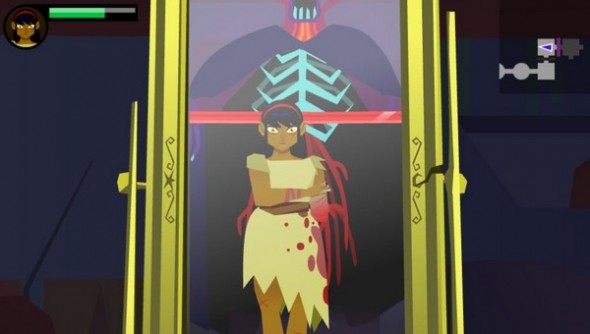 Taking up a sword and recalling the combat training she conveniently received from her mother whilst growing up, Sasha tentatively explores the hellish dreamscape whilst slashing away at monsters. It’s here where Severed’s title-referenced mechanics come into play.

Index fingers at the ready, because this is no casual button-tapping affair. Instead you’ll be swiping with broad, precise strokes across the Vita’s touchscreen, honing in on enemy weak points and deflecting incoming blows. Charge up a focus meter and you’ll finish off your opponent with a brief window of opportunity to literally sever their limbs from their body.

I know what you’re thinking: this just sounds like a simple smartphone game. Whereas there are some parallels with the likes of Infinity Blade, however, over time the combat increases in complexity far beyond the average iOS or Android app. Enemies increase in number and ferocity, with varying buffs to attack and defence. You’ll counter this with the ability to charge attack, freeze foes, leech their life and even steal the aforementioned buffs. 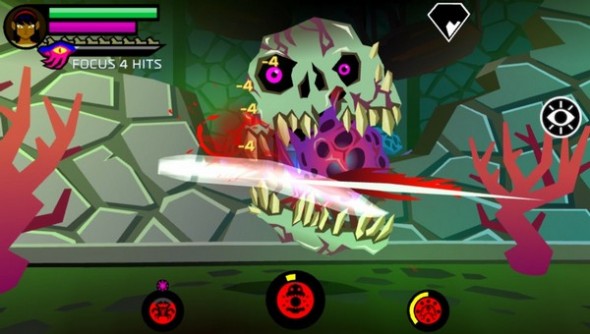 Each battle is a strategic encounter of juggling several enemies at once, rapidly switching between them to block hits and launch counters in-between their attack patterns. It’s also important to charge up your focus meter fully before dispatching any monsters, to ensure you don’t miss out on the amputation finisher. Slash off the arms, tentacles, eyes and other miscellaneous body parts of monsters and these all contribute to unlocking perks and leveling up abilities. This element of progression beefs up what is already a surprisingly deep and engaging combat system.

Of course, there’s more involved here than just non-stop fighting. Severed’s nightmarish overworld is waiting to be explored, along with a handful of dungeons and temples contained within. Interestingly, level traversal is framed in a first-person perspective with the ability to freely look around on the horizontal axis, but movement itself is actually reminiscent of classic RPGs – restricted to moving one step at a time across pre-determined tiles. 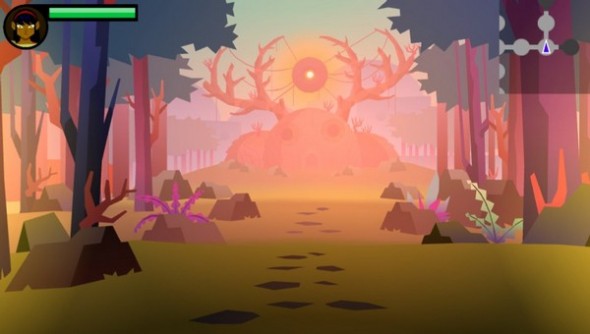 Better head for the gormless, antlered dreamcatcher temple, I guess.

It’s a purposely constrained design, but the game is no worse off for it. Much of Severed feels precisely engineered to give a light puzzle feel, from the lever-operated doors which stay open just long enough to squeeze through, to the Metroidvania-inspired barriers preventing access until you acquire the right ability, upon which areas open up and interlink in a satisfying ‘eureka!’ moment. A fixed movement system simply feels like a natural extension of this philosophy. I don’t like to be cynical, but no doubt this was a cheaper and easier solution in terms of the development process.

It also takes nothing away from your opportunity to admire and interact with the game world – and a fascinating setting it is, too. From the decaying temple ruins overgrown with bizarre organisms to the otherworldly portal dimensions and desolate woodlands, Severed’s world is paradoxically both unwelcoming and seductively enchanting. Taking obvious cues from Guacamelee!, the art style is a darkly angular and abstract take on cel-shading, bursting with colour and personality. In contrast to Guacamelee!, however, its macabre themes and visual design lack the brevity afforded by humorous characters and dialogue – this is a far bleaker affair. 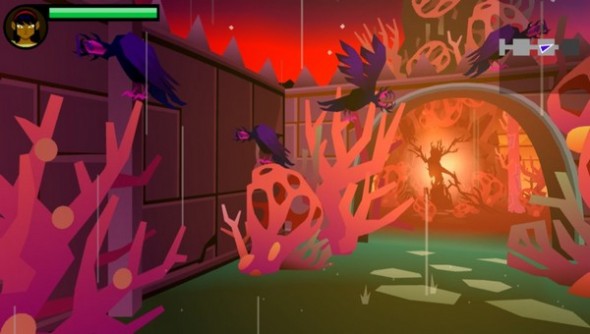 Hope you like death, and decay, and more death.

Your map branches out in varying directions, slowly revealing more of itself as you explore and gain passage through previously unreachable sections via new abilities. Patience and a keen eye pay off here in helping to uncover the myriad secret areas and pickups hidden throughout. Pull a concealed lever, use your powers in a creative manner or solve one of the puzzles illustrated in ancient tomes and you’ll be rewarded with collectibles to enhance your health and mana, or a cache of body parts for upgrading your abilities with. These challenges add a satisfying level of depth and mix up the pacing from being just an incessant slash-fest.

What I particularly appreciated about Severed was the difficulty curve and level of intricacy, which gently and evenly escalate throughout its modest runtime. It initially errs a little too much on the simplistic side, but soon ramps up with enough variety and complexity to satisfy until the end of the game. My only complaint is with some of the final battles which introduce a timed element – these are not so much challenging as they are plain frustrating. Thankfully they’re the exception rather than the rule and fail to sour an overall gratifying experience.

Chop ’til you drop

Severed is proof that DrinkBox Studios have the talent to craft a range of distinct, exciting IPs across various genres. Whilst I’m personally itching for a Guacamelee! 2, Severed’s well-accomplished mechanics and fascinatingly grisly ambience make it a compelling entity in its own right.

In fact, my biggest criticism is its platform exclusivity. I adore the Vita and I’m sure the other four people who bought one do too, but it’s a crying shame that more won’t have the opportunity to experience Severed for themselves. Yet. It would be madness to not port the game over to other touchscreen devices like the Wii U, 3DS and smartphones in the future. In the meantime, Vita owners should treat themselves to one of the last great exclusives the console is ever likely to receive.