We gamers are spoiled for choice when it comes to blowing stuff up. We can indulge our primordial urge to destroy things in many different ways, but with so much choice, it can be hard for any one game to stand out. Especially one that doesn’t sport the latest in photo-realistic graphics, real-time physics modelling and really big guns.

Sine Mora is one of the few that does, despite having none of the above. Instead, it relies on a brave combination of old-school gameplay mixed with some clever new twists, that makes it easily accessible for newcomers yet challenging for hardened veterans.

Once upon a conflict

Like so many other games before it, Sine Mora takes place in a world engulfed in a war. The convoluted story is told by a motley crew of characters that hail from both sides of the conflict. It’s quite hard to point out the good guys from the bad, as they have all suffered at the hands of their enemies and are eager to get their revenge in one way or the other. A father out to avenge the death of his son, and a group of time-travelling rebels out to destroy the Empire that enslaved them, are but a few of the complicated characters in Sine Mora. Their paths constantly crisscross back and forth as the game progresses.

It’s a surprisingly dark plot for a game that is set in a very colourful world, and it sports some interesting twists and character-developments. However, the connection between the various characters can be quite hard to follow and the plot skips back and forth in time and place, making it even harder to make sense of it all the first time around. Luckily, you don’t need to know to much of the story to get into the action. 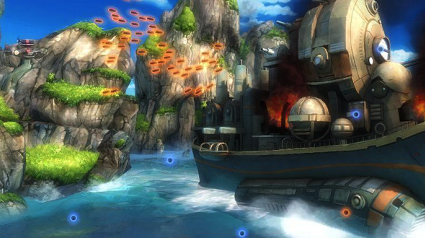 "Nice gunboat you've got there!"

Out of time
At first glance, Sine Mora looks like a classic shoot’em-up of times gone by when games like R-Type and Gradius ruled the arcades. It even plays in much the same way. Each levelsees you in your little plane going up against wave after wave of enemies, who throw everything at you but the kitchen sink. The onslaught is momentarily broken up when you encounter a boss that takes quite the punishment before it goes down.

However, it doesn’t take long before you realise that Sine Mora, which is Latin for ‘without delay’, is more than a welcome throwback to a by-gone era. The ability to manipulate time is more than just a quirky plot-point; it is also a clever gameplay mechanic that is put to good use. You can’t die in Sine Mora, at least not in the traditional sense. Instead of an energy bar, you are given a timer that starts counting down as soon as the level starts. Once it runs out it’s game over, but you can keep it going by shooting enemies, collecting power ups and so on.

Checkpoints are generously scattered throughout the levels, but even so, you will find yourself up against the merciless ticking of the clock as you frantically shoot at everything in sight. You can also manipulate time itself and slow it down to avoid enemy fire or safely maneuver into a more advantageous attack-position. Sine Mora’s use of time is a first for the genre, but it complements the action rather than take away from it. 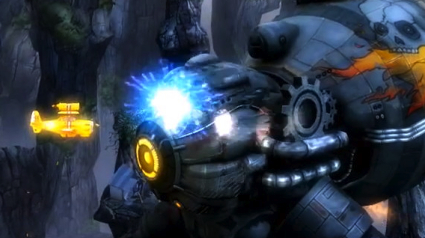 Sine Mora also sports more traditional mechanics. Enemies will drop power-ups at random that range from extra points to shields and weapon-upgrades. The latter quickly become treasured commodities as they boost your weapons, allowing you to down enemies quicker and therefore get more seconds on the clock. You will lose upgrades one by one if you get hit, but luckily you have a small window of opportunity to pick them up again before they disappear for good.

This doesn’t come with out risk though, as you may have to fly directly into enemy fire to do so. Getting hit means you lose precious seconds, but then again, weaker weapons means it takes longer to dispose of enemies and gain extra time. You have to constantly weigh up the pros and cons for chasing down lost weapon upgrades.

The various characters you get to play as also bring their own unique twists to the action, in the form of powerful secondary weapons. Each character has his or her own weapon, like massive devastating laser beams, powerful rocket attacks and so on. They can inflict massive damage but only have limited uses, so you have to know when to use them and when to hold back.

Sine Mora can be played in a Story Mode, a special Arcade Mode and a Score Attack mode. Hardcore veterans of the genre will feel right at home within Arcade and Score Attack. The basics of the gameplay remain unchanged, but the difficulty is ramped up significantly. Enemies are much more aggressive, you have less seconds on the timer and less continues when you die. It all adds up to give you one heck of a challenge if Story Mode is too soft and tender for you.

The extra modes also allow you to choose what plane you want to fly and who to fly it, and let you custom paint it as well. It also gives you a two extra time powers, like reflector shields and the ability to briefly rewind time, in addition to the standard one. However, you can only bring one of them with you into the cockpit.

Diesel-punked
Sine Mora might be played in the traditional 2D fashion, where you slowly pilot your plane from right to left while blasting enemies, but it’s still brimming with some great-looking 3D models and backgrounds. The action takes place high in the sky, close to the ground and even deep below the sea and through dark caves.

Each area is full of detail and colours that all help bring the world of Sine Mora to life. When playing the game in Story Mode, small cut-scenes will break up the action from time to time as you transition from one area to the next. Apart from being a welcome break from the carnage and give you time to flex sore thumbs, it also lets you sit back and take in the beautiful scenery. You will constantly find yourself admiring the dieselpunk-inspired art direction, which suits the game so well.

The game’s bosses, ranging from giant mechanical squids and armoured trains to huge weapon platforms, look particularly fantastic; as do the characters. The inhabitants of this colourful yet brutal world are strange human/animal hybrids, and their often comical appearance jars with the dark nature of the plot. Yet their plight and motives are what make them believable, and they fit in well with the game’s overall aesthetic. 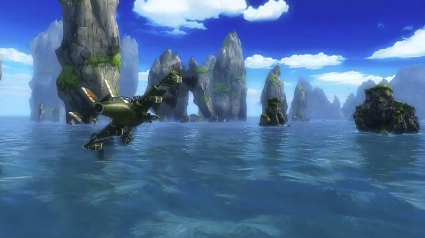 The world of Sine Mora is full of breathtaking vistas

Lost in translation
Less so can be said about the sound, which apart from one major quirk, is pretty run of the mill as far as shooters are concerned. It’s not a bad sounding game, though. Explosions are tense and brutal; as is the sound of gunfire, the roaring of engines and the dramatic music.

It’s just all been heard before, with the exception of the voice-over… because that is in Hungarian! This will undoubtedly throw you off-kilter when first you fire up the game, and you will find yourself frantically searching through the sound option, looking for a language setting which clearly must be set to the wrong language. However, Sine Mora is indeed meant to be in Hungarian, for no other reason than it being a funny quirk that suits this strange world pretty well.

Blast from the past
A true hardcore vet might lament the fact that time and not enemy fire is the biggest threat in Sine Mora, and it’s true; having the pressure of death by one hit riding next to you in the cockpit would make Sine Mora one heck of a challenging shooter. Although, then the game would lose its accessibility, which is what makes it so very enjoyable. It makes it easy to pick up and play for newbies, or those that need a gentle re-introduction to the genre. Yet at the same time, it offers plenty of challenges to more experienced players who won’t need to feel needlessly cushioned, as they can just jump right in to the Arcade Mode or Score Attack.

That doesn’t mean Sine Mora is without its faults. The plot, while interesting, can be quite hard to follow. On occasion, you can also find yourself in the weird situation where the timer is just about to run out, and there are no enemies left to blast. In these situations, death is inevitable. Dying a frustrating death like this is downright infuriating, because it’s caused by a lapse in design and not by your skills, or lack thereof.

These moments are few and far between, and luckily, Sine Mora has plenty of other things going for it. It is one of the most accessible old-school shooters out there, and the fact that it caters successfully to players at both ends of the scale (be they hopeless newbies or seasoned veterans), is a true testament to the game’s overall solid design.

This is a world where big budget AAA-shooters constantly trip over each other to bring us carnage on a grand scale. It is a true feat, then, that a small indie game like Sine Mora can appear from out of nowhere, and remind us that the simple act of shooting stuff out of the sky is still as fun and exciting now as it was back in the good ol’ days.