It’s not the first time that Sonic has dabbled in unknown territory, with some mixed results. Sonic Jump first came out a few years ago in Japan as a mobile video-game, and Sega has decided to finally let the Western world experience it. However, is Sega’s latest studio, Hardlight, up for the task, or is Sonic Jump just another nail in the coffin for the old blue hedgehog?

The story in Sonic Jump is flimsy at best; Dr Robotnik is up to his old tricks and has kidnapped all of Sonic’s furry friends again.

This actually works out well, since it means that the player can concentrate on playing. A new cut-scene of the evil scientists fleeing appears at the end of each zone. This means that the story is non-intrusive and doesn’t get annoying. However, it also means that it’s nothing players haven’t seen before.

Jump to go up
Playing Sonic Jump is so simple that it really doesn’t need instructions. Sonic automatically jumps up, with the player moving him from side to side by tilting the mobile device. This works out rather well on the iPad in particular. The size of the tablet makes it possible to easily manoeuvre the hedgehog around. In contrast, it’s a lot harder to move Sonic on the iPhone. The size of the device makes it difficult to always move the hedgehog in the desired direction.

It’s possible to also make Sonic double-jump by touching any area of the screen. This will prove handy in later stages where some of the platforms don’t make Sonic jump very high. 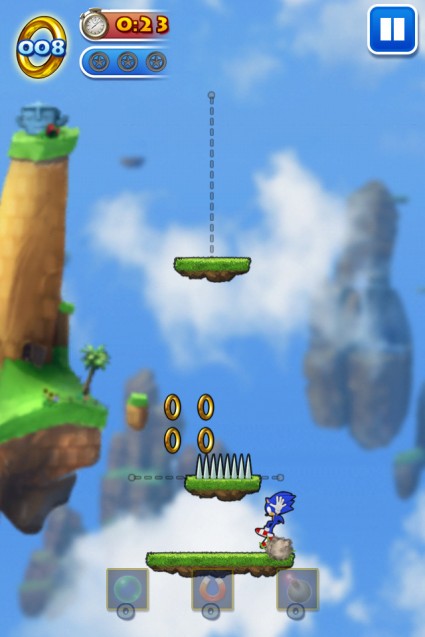 It’s not that challenging to get through the first Green Hill-inspired zone. It will take a couple of attempts to get through some of the acts in the last third zone, however. Fortunately, the difficulty spike is increased gradually.

Yes, there are only three zones in Sonic Jump. There is the promise of extra free content being added soon; however, players will have to make do with two/three hours of content for now. A strange decision, seeing as the upcoming new content isn’t paid-for. The game could have just been released with this content included if Hardlight had waited until it was all ready.

Fortunately, the levels are well-designed with plenty of new traps to avoid in each zone. It’s the sort of video-game that also makes players want to repeat levels, so they can improve scores and get all the red objects.

There are also challenges that will rank up Sonic, which provide a much-needed reason to continue playing Sonic Jump. However, it’s not clear why only three challenges become unlocked at a time. It means that sometimes the player will, for example, unlock a challenge to do with a boss, whilst in another zone. It’s hard to understand why a player can’t just naturally unlock a challenge without the need to backtrack.

Sonic earns rings that he captures in each level, which are then used to buy items and upgrades for these items. Fortunately the items do have some good uses, such as one that gives Sonic a second chance to continue a level. Some of these items are also only unlocked after ranking up. Sonic ranks up by completing challenges, which is a rewarding and addictive game mechanic. It’s even possible to unlock new characters (currently Tails and Knuckles) with a really high rank.

It’s not a mobile video-game without some sort of microtransaction, and Sonic Jump doesn’t skip this trend. It’s possible to purchase more rings with real world currency. Those inpatient can burn through their bank account and not have to gather rings the old-fashioned way. It sounds like a good compromise, but it means that players who go down this route will never really experience the joys of obtaining new items through hard work. It’s the perfect example of why microtransactions are slowly but surely ruining the spirit of gaming.

Smells like Green Hill
Visually, Sonic Jump has some very nice background artwork. There’s a lot of colour and it feels distinctly like old-school Sonic. The downside is that there is only one background used for each zone.

The static cut-scenes are few but provide a welcome break from all the jumping. The art style is not what many would associate with Sonic, but it works and there’s a few funny sights to witness. 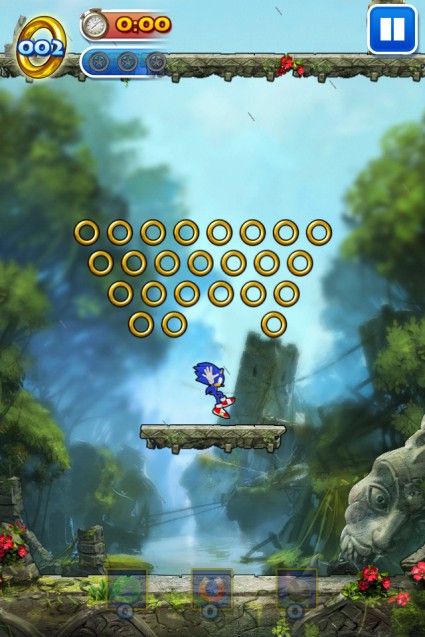 Sonic and his rings.

There are a lot of different enemies in each zone, but most of them consist of graphic assets from previous Sonic video-games. Even the evil genius bears a striking resemblance to his physical appearance in the dreaded Sonic 2006 video-game entry.

Can hedgehogs dance?
The soundtrack for Sonic Jump is minimal but is reminiscent of the music in the Sonic Mega Drive video-games. Sadly there isn’t a lot to listen to, with only one music track for each zone.

Let Sonic (briefly) entertain you
Despite all of my criticism, Sonic Jump isn’t necessarily a bad video-game; it just lacks the fundamentals to make it stand out. It’s a perfect distraction for a quick session, whilst commuting, since it’s far too short. At least anyone purchasing it will eventually get some value out of it when the free content becomes available. Sonic Jump is a good attempt at trying to branch out the iconic hedgehog, but it ends up being a mere distraction.