One of the wonderful things about Vita is the support it offers independent developers. While you’re likely to see old favourites continue to pop up, such as Uncharted, Wipeout and Motorstorm, the Vita store gives gamers the chance to experience new titles like Escape Plan, A-Men and a little wonder called Tales from Space: Mutant Blobs Attack.

Yeah, you’ve probably not heard much about this mouthful. The Vita launch line-up was pretty busy with AAA launches, and this one sadly got lost in the shuffle.

Now that the dust has settled, however, I’m telling you to absol-blobbing-well-lutely give this one a chance, and here’s why…

Consume and destroy
Imagine being put in charge of a green, one-eyed, mutant blob that can eat things. Thanks to a science-experiment gone wrong, that’s exactly what’s up. Deep in the Humane Blob Torture Research Centre, one blob is tired of being of being pricked and poked by syringes and scalpels, and is ready to face the outside world. When one silly scientist puts his hand in the blob’s cage, wanting to showcase it to an ensemble of college students who have visited on a school trip, our mutant terror takes advantage, escapes, and manages to release all its blobby friends into the wild. Oops.

In the midst of the chaos, the mutant blob quietly slips into one boy’s backpack without being noticed, and is carted off site to a nearby college. Clearly in a hurry to get back to grinding uber-gear for his 85 Horde Shaman, the boy throws his open backpack into the corner of his dorm, and rushes over to his computer. Fortunately, this allows our green menace to make its escape.

Now free of the Research Centre that birthed its insatiable desires, the blob is free to wreck havoc with the world as its playground. From army barracks to outer space, there’s nowhere it won’t go to satisfy its unhealthy levels of hunger. Be afraid… 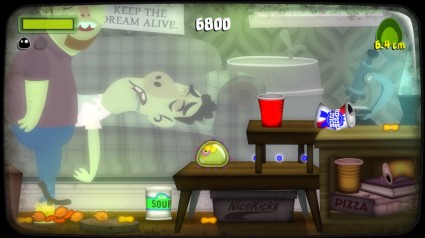 This ain’t King Kong
Our mutant blob is controlled with the left thumb stick, but action in the game also makes use of multi-touch. You’ll be required to move objects obstructing blob’s path, slingshot it to far-off locations, repel or attract it to certain magnetic objects, and even use a rocket-pack to ascend to greater heights.

Game objectives generally require blob to grow in size before it can progress to the next area. At the beginning, it’ll be pouring itself out of beer faucets; but continue to eat, and blob’s size will see it comparable to tall buildings. Its size-o-meter in the top right corner of the screen grows in stature when blob consumes something, whether that means a chocolate bar, a human being, even a tank!

The continued growth of blob makes for a very interesting, exciting gameplay mechanic. Wolfing down humanity and all of their man-made creations never gets dull, and it completely separates the game from anything else currently on Vita.

However, I did find that the combination of multi-touch and analog control could sometimes be completely cock-handed. Some scenes in the game will require precise, timed-screen touching, as well as expert analog control. As I’m sure you can imagine, these scenes are down-right annoying, and will require numerous, frustrating retries.

Each level is scored based on how much you’ve eaten, the speed at which you’ve gone through the level and how many blob-friends you’ve consumed along the way. At the end of it, you’re awarded a medal based on how well you’ve done, with gold (obviously) representing the highest honour.

In addition to the main campaign, the game also contains several levels which are completely controlled by tilt. You’ll be required to navigate a blob through a maze, avoiding little holes and other obstacles, so you can reach the finish line. These serve as little more than mini-games, and are, thankfully, entirely optional excursions. The control mechanics of these are dreadful, and the layout of the levels seems out of proportion, and entirely unassuming of the type of control required.

Frankly, you’d have no idea how sensitive the gyroscope in Vita is by playing MBA, as you’ll literally have to steer your handheld like a wheel. In all honesty, you’re better off avoiding these at all costs, as they’ll probably put a dampener on your enjoyment of the game, rather than compliment the experience. 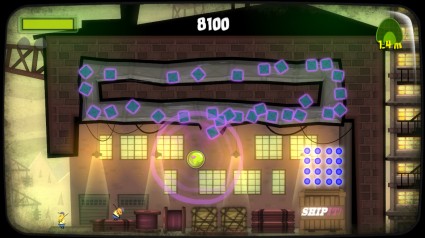 They came from outer space...

It didn’t come from a Black Lagoon
The story is moved along by a series of cut-scenes, presented in-between the game’s five areas. They come in the form of news flashes, as reporters talk about the horror of this growing, green menace. They’re entirely optional, of course, as it’s always pretty clear where our blob is terrorising. Still, they offer a humorous interlude between gameplay, and go a long way to supporting the game’s rather sinister tone.

Cleverly, DrinkBox studios never design the blob to be bigger than the screen it’s intended for. Rather, they gradually shrink areas in size as you progress, therefore making blob seem larger than it appears on screen. Areas that tower over the blob to begin with, are dwarved by the mid-way point in the game.

Animated backdrops also help bring this little 2D platformer to life. Whether you’re seeing humans towering over you, twinkling stars or oversized vehicles, MBA masterfully handles the growth and development of blob, not always using gameplay mechanics to do it.

GLOOP!
MBA is full of quirky little sounds and effects which deftly suit our blob’s transformation. The sickening sound of absorbing humans, the squelching of flitting through tunnels, even the sound of magnetic attraction. All of it so very suited to the game’s ethos.

The 50’s style theme tunes certainly give the game the ambience of a cardboard-propped sci-fi, and will undoubtedly appeal to those who’ve watched such shows; but hearing them on loop, especially in areas you’ll be forced to repeat, borders on the irksome. There’s only so much times you can hear those wails and woohs before going a teensy bit cranky! 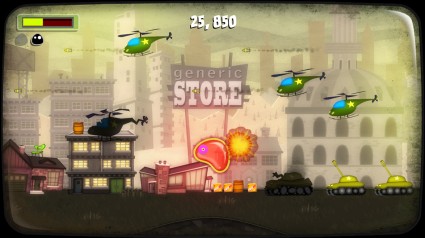 I’ve got my eye on you
In terms of raw, addictive gameplay, however, this is an absolute must-have. Mutant Blobs Attack is one of the finest, throw-back platformers I’ve had the pleasure of playing on any format. Couple that with an attractive price-point, and a wealth of replayability, this is probably the best launch title that none of you played. Rectify that. Immediately.