The Legend of Zelda: Skyward Sword

Long-running series forever run the risk of getting a bit long in the tooth. Not knowing when to quit has become a kiss of death for many, even legendary franchises. Yet, it seems as if Nintendo continue to be an exception to the rule. No matter how many times they release a Zelda game, one way or another, it still manages to be pretty damn spectacular.

Yet, one cannot help but wonder, if the next game will be the one to break the trend. Thus, we inevitably ask ourselves, will it be Skyward Sword?

Origins
Perhaps the most shocking thing about Skyward Sword is that the game has been conceptualised as a prequel to all previous Zelda games. While that may sound like sacrilege to some (both that Nintendo have confirmed it, outlining a Zelda timeline at long last, and that they’re going back even further with the history of the Master Sword and Ganondorf), to me, it actually helps to give backbone to Skyward Sword, allowing you to get behind the mythology of the series more than ever before.

Even though each Zelda game sees you start afresh, gradually increasing your abilities as you progress, earning more hearts and gaining better equipment in battle, this time actually feels like a genuine beginning. The story begins in Skyloft, a city residing above the clouds, with Link awakening from a very deep sleep. Despite his doziness, it’s an important day for Link, as he undergoes the final trial to become a knight. In order to become a knight in Skyloft, he must complete the Wing Ceremony, which sees him fly against other potential knights and rival apprentices.

Naturally, our hero is successful, despite fighting the odds against his nemesis, Groose, and gets to spend some time alone with his childhood friend, Zelda. However, just as the couple are about to get better acquainted, Zelda is sent spiralling away by a rogue storm, which drags her below the clouds to the ruined lands of Hyrule and into the hands of an unspeakable evil. Now a knight, Link must do the unthinkable, descend from on high to walk the lands below, and venture forth to rescue Zelda. 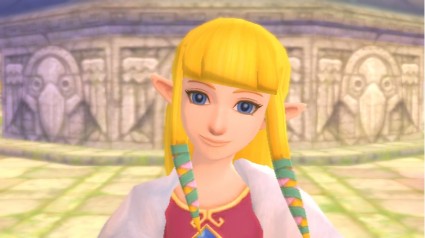 Taken by a cloud. No. Not from Final Fantasy..

Shooting for the stars
Nintendo have made some incredibly brave decisions with the sixteenth entry in the Zelda series. Full Motion-Plus control for the sword, the definitive origin story giving clarity to a series that has, until now, prided itself on a very cryptic, mysterious nature, as well as incorporating the WiiMote controls into the puzzles.

Thankfully, the result is something truly special. Somehow, someway, Miyamoto and Nintendo have created their finest work to date. This is, unequivocally, a superior title to the Gamecube developed Twilight Princess. Also, unlike its predecessor, it feels like a true Zelda title, adorned with the same beloved formula, but radically altered to, not only suit this generation of motion control, bringing this amazing franchise into the 21st Century, but also create the finest Zelda title since Wind Waker.

What’s also wonderful is that Skyward Sword makes full use of the ‘prequel’ aspect. Link doesn’t begin all-powerful and well-equipped for the perilous journey that awaits him. While he is blessed with some incredible items at his disposal, he is also extremely hampered. Limited inventory slots, shields that sustain damage and need to be continually repaired. Link, while he has the qualities of a knight, and a great destiny set before him, is still an extremely vulnerable young boy.

It is pretty clear that pure swordplay in Zelda would not have been possible without Motion-Plus. It needs to be precise, accurate, prove that it cannot be bettered by a simple button press, and, more importantly, not take anything away from the experience. That wouldn’t have been feasible with the original iteration of the Wiimote, as we saw, to a degree, with Twilight Princess. As a result, gaining the sword in SS will initially feel quite alien. 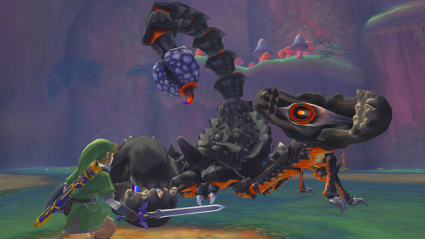 The sword controls are FUN...

The direction at which you aim your sword has consequence, and you will need to study/understand each opponent’s tactics in order to break through their defences and finish them. Enemies react to the direction at which you intend to hit them, if you try to strike from the left, they will deflect it or dart out of the way. Telegraphing your movements will, more than likely, get you killed very quickly.

This is what makes Skyward Sword such a unique game. For the first time, perhaps of any motion-controlled game I’ve played, there actually seems to be a point in waving a controller around. There’s a wonderful, tactical element to Skyward Sword that has been completely lacking on most Wii and Move games, but it’s one that adds to the overall gaming landscape of Skyward Sword, rather than create a game wholly dependent on one such gimmick.

The motion controls don’t just extend to the sword, however. Raising your nun-chuck will have Link loft his shield in defence. When running, shaking the nun-chuk causes Link to roll forward (although, this feels quite gimmicky when compared to the other motion controls). Controlling your bird is completely handled by twisting the Wii Remote, and waving it up and down to adjust your altitude, although this feels clunky and cumbersome, with harnessed improvements coming the more you become accustomed to it. Finally, you can navigate a remote control beetle which is used to penetrate out-of-reach, inaccessible areas, as well as collecting and depositing objects.

Essentially, this is the game the Wii was designed for. Not the party games and shovelware that has plagued it, but a fully fledged game in a legendary series, making good use of the technology that the console was initially founded upon. Six years, unfortunately, too late. By now, many people have already traded in their Wii’s or lost interest altogether, having moved onto an Xbox or Playstation.

Unfortunately for them, they are the ones missing out. 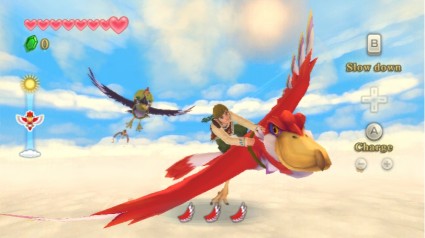 Wonder and enchantment
I’d be remiss if I didn’t mention it. The Wii is looking old, and no matter how much Nintendo charm they slap on top of Skyward Sword, that’s not going to change. This is a 2011 game that’s shipping without HD support, and, in a generation filled with Xbox and Playstation, that really is past the point of being acceptable.

That being said, it’s Nintendo, and there’s an infinite quality about Skyward Sword that, once you’ve played for an hour or so, you won’t even notice the difference. Skyward Sword is beautiful, and, in many ways, miraculously current, considering it isn’t sporting 1080p from top to bottom.

There’s a certain timelessness about Zelda games, whether you’re flicking through Wind Waker, or you go back to Ocarina on the 3DS last year, even Link’s Awakening, the Zelda team are very proficient at making their games stand the test of time. Skyward Sword is no exception, and undoubtedly, with its vibrant colours, elegant hand-drawings, and insatiable charm, will be as fondly cherished fifteen years from now as it is today.

You play beautifully
However, unlike the lack of HD in the graphics, the sound quality in Skyward Sword is more noticeably muffled when compared to the crisp quality on other systems, and is unfortunately, much easier to detect. It’s just as well there is no dialogue in Zelda, because it probably wouldn’t sound too flattering at this point.

However, where SS differs from other games, it actually makes great use of its sound, especially when the player finds the Goddesses Harp. Here, you will need to strum the instrument in a certain way in order to unlock hidden treasures, and secret entrances.

Equally, the background music is extremely cinematic, and works harmoniously with the action on screen, whether you’re sailing through the clouds on the back of your bird, or treacherously traipsing along lava-infested shores.

As you adjust to the graphics, so eventually the sound will win you over, but you cannot help but wonder how this would have sounded remastered for the Wii U? How much better HD will be for the overall quality of this product? Through all its charm and virtuosity, Skyward Sword is a game that every so often cries out for a better virtual life. 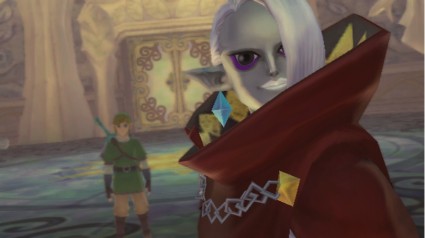 This guy has a long tongue.

For Hyrule!
Skyward Sword is exactly the evolution the Zelda series needed. In many respects, it breaks as many barriers for the series as Ocarina of Time did all those years ago. Regardless of the game not being in HD, Nintendo have proven that they are the greatest first party developers in the world, having worked with the limitations of a system other developers have exploited, giving it a complete rejuvenation. A system that could have done so much more than it was given credit for.

This is the reason we got excited for the Wii back in 2005. We may have waited a lot longer for it than we’d originally hoped, but it finally got here, and it is glorious!