With the emotional ending of the The Walking Dead: The Game‘s first season still fresh in memory, many of us are now looking forward to the next season. First, however, we need to make a pit stop at The Walking Dead: 400 Days.

When Telltale Games sat down to flesh out ideas for The Walking Dead: The Game they could just as easily have ended up with a game loaded to the brim with shotguns, chainsaws and plenty of blood, guts and gore and no one would have batted an eye. However, Telltale Games are called ‘Telltale’ for a reason, so instead of going down the road of so many zombie games before them, they dared to be different. Instead, they crafted a game that put a dramatic story, memorable characters and tough decisions at the centre, and the result was one of the most memorable games of 2012.

The Walking Dead: 400 Days continues along that same path yet is neither a sequel or a prequel to the first game, but more something in between. It’s a stand-alone episode consisting of five separate stories that are interwoven in subtle and clever ways while jumping backwards and forwards in time. It’s all centred around a small diner and takes place over a period of (wait for it!) 400 days, chronicling the events of a small band of survivors whose paths somehow all convene at the diner.

400 Days doesn’t preoccupy itself with how they got there, or what they had to do to get there. Instead, it throws you head-first into their drama of where they are here and now and what they have to do to continue their dramatic journey. 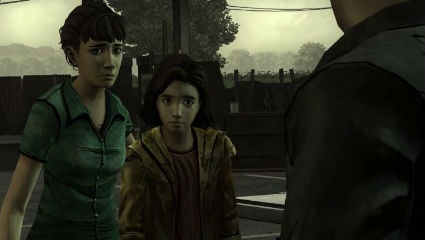 There isn’t much to smile about around here.

Each story features one character who is faced with his or her own unique dilemmas. In-keeping with The Walking Dead’s brand of gut wrenching decisions, these dilemmas will have either immediate of far-reaching consequences for either you or the people around you. There is Shel who is desperate to shield her younger sister from the harsh realities of this new, dead world. There is Wyatt who is on the run with his friend after a heist goes wrong, and there is Vince who is on his way to prison when the outbreak hits and chaos ensues.

While each story takes place at different times, there is no preset order in which to play the five stories. This can be rather confusing at first if you are expecting a coherent story from the beginning, because which is not what 400 Days sets out to deliver. You soon learn to appreciate this rather fragmented way of storytelling though, as events or characters only briefly mentioned in one story suddenly appear or actually play out in another and it’s quite exciting when this happens, allowing you to slowly piece the narrative puzzle together.

It all comes together in the end and when that happens you will have spent an intense few hours in the company of some very complicated and interesting characters. The interactions between these characters take a bit more of a front seat in 400 Days as the different stories allow for more characters with different motivations, agendas and experiences to come into play. All of this is presented through some very impressive dialogue that make the characters seem both well-rounded, and most importantly, believable.

Everything is grey
All the stories start out relatively innocent but things quickly spiral out of control in unexpected ways and soon decisions have to be made. This has always been the cornerstone of The Walking Dead, be it the comics, the TV show or indeed the game. The hard truth is that most decisions can’t be categorized as either right or wrong, nor can characters be considered truly good or truly evil. Each of them are a product of circumstances and some are more damaged than others. Right or wrong, truth or lie, or good and evil no longer exists, because in a world of death, everything is grey and blurred.

The same goes for morality which 400 Days capitalizes on with as much gusto and vigour as the previous game did. There is only your own moral code to guide you and the game never passes judgement on you for choosing one way or the other. It simply presents the choice and then leaves you make it. The consequences can be immediate or they can have long term repercussions that you may not find out about until later. The choices appear as either dialogue choices, what to say or not to say in a given situation; or as actions, do you stand and fight or do you hide? Do you leave the wounded behind or do you help him? Do you shoot or not? 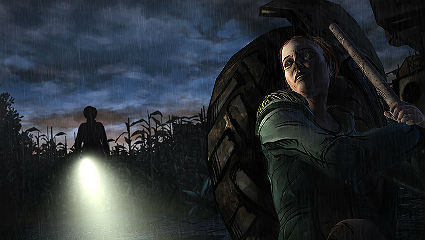 A desperate escape through a cornfield is but one of many highlights.

While these choices are what form the core of the experience, it doesn’t mean 400 Days is without action. In fact, 400 Days packs a few but very memorable action set-pieces that match and even surpass what was found the first game. A desperate escape through a cornfield and an incredibly tense search through a thick fog stand out as some of the highlights, and considering 400 Days’ relative short length, that is quite an achievement.

Comical
The unique comic book aesthetic of the original created a very unique visual quality. You couldn’t accuse the game of being photorealistic in any way. However, the game’s unique look actually made the world, and especially the characters, feel even more alive as the ambience, the dialogue and the voice-acting had to work twice as hard to make them believable and worth caring for.

400 Days is no more and no less as great to look at as its predecessor. There are a some truly gruesome scenes to behold in 400 Days that will make you wince just as much as had this been a photorealistic tour-de-force like The Last of Us was. This despite the fact that the graphics aren’t the most advanced and the animation is still rather crude and stiff in places, but it all comes together to form a coherent and sometimes surprisingly gory whole. 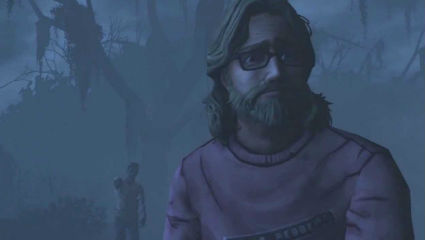 Heart and soul
A game like 400 Days lives and dies by its characters. While the dialogue is incredibly well-written, it will only spring to life if the voice-acting is up to the task. A half-hearted phone-in would make it all for nothing. Luckily, the voice-acting in 400 Days is anything but. Each actor embraces their characters with heart and soul as they bring them to life, covering every aspect of human emotions; from weakness, anger and innocence to horror, desperation and even joy and humour.

There are some funny moments in 400 Days that will make you giggle but it never happens at the expense of the overall story and its mission; seeing ordinary people slowly crumbling under or coming to terms with an extraordinary situation. Add to this some beautiful music that sets the right tone for the right scene as well as some efficient sound effects, and the overall ambience of 400 Days is very hard to fault.

The big tease
400 Days is hard to label. Not a prequel and not a sequel either, but more of a lure set to tease some of the characters and events that may or may not shape the events of the upcoming second series of the The Walking Dead game. It even very subtly echoes some of the choices you made in season one, which is very clever; although, these moments are so subtle you might miss them if you’re not looking. As such, 400 Days can be played independently of season one and isn’t a bad introduction to the universe if you haven’t played The Walking Dead although you never really reach the emotional high’s and low’s of Clementine and Lee’s memorable journey.

Due to it’s size, 400 Days also has limited space to navigate in, which means it’s a very concentrated experience. While it certainly makes the most of its limitations, these also prove to be its biggest weaknesses. Some of the stories feel almost too short and come to an end just as they start getting really interesting. There is also very little room to build character, often resulting in you facing choices that seem somewhat unfitting for the character you’re playing.

Because of it’s relative short length (about an hour and a half of playtime) 400 Days could be seen as merely a clever ploy to keep fans hungry and a chance for the developers to include ideas or sequences that didn’t make it to the final game. Whether this is the case or not, Telltale has certainly gone into this with as much dedication as they have with everything else.

Just exactly how the choices made during 400 Days will affect the story in the next season remains to be seen. It is an interesting proposition nonetheless and no matter how 400 Days may or may not shape events in the next The Walking Dead, 400 Days remains every bit as well-crafted as the original. It mixes up the formula slightly but never strays off the beaten path because there is no need to. The result is a tasty second helping of all the elements that made the first season of The Walking Dead such a great game experience: the tough decisions, the characters, the relationship between them, the sudden twists, and of course… walkers!