The Witcher 3: Blood and Wine

If forced to sum up the second and final piece of DLC for The Witcher 3, Blood and Wine, with one word, you could do a lot worse than ‘skies’.

Grammatically speaking, just ‘sky’ would be more appropriate, as this is all still one marvellously intricate, interconnected world. But it would be so far removed from the aesthetic and emotional crux of the sort of splash that the early moments of Blood and Wine makes as to actually feel like a cheekily misleading untruth.

The first impression – at least, provided you’re returning and not just taking the all at-once-even-if-it’s-way-too-much route, or simply never stepped out of Geralt’s boots for longer than a few days, is a more refined interface. A significant patch was rolled out, red carpet-like, for Blood and Wine ahead of release, and so while its isn’t completely immune to the odd glitch (and even a hard crash during the review process), this is The Witcher 3 at its most refined. The menus still shift sluggishly on console, but the layout is improved and are dusted with quality-of-life improvements that benefit the entire game. Missing a leather strap from an upgrade that a Blacksmith could otherwise perform for you? Just buy it from him in the same screen, no faffing with menus required. Such changes stand to massively impact player’s willingness to actually toy with the game’s deeper systems.

This extra polish allows for Blood and Wine to shine, and shine it does, often in a literal sense. After responding to a notice – not the first in this content in which Geralt is called on by name – the silver-haired witcher deals with a couple of minor problems before a long trip south. He’s accompanied by a pair of knights in glistening gold armour and who probably had moustaches that would do Salvador Dali proud (look, I can’t actually remember, okay. This was the beginning of the DLC, and this DLC is really freaking big) to meet the Duchess of Toussaint, the wholly new location in which this tale of blood (Vampires, mostly) and wine (erm, wine. Lots of it – hops grow in the wilderness, but nobody in this land seems to have figured out what to do with them) takes place.

The cut from the familiar war-torn lands to Toussaint is memorable. As with most of the cinematics found throughout all of the base game, they’re presented with a directorial touch that is often absent from other games of this scale; a moment of craftsmanship that almost seems superfluous. At this moment, it’s clearer than ever before that The Witcher is Polish fiction, its locations sometimes beautiful, but always sadly so, with grim oppression hanging in the air. It’s Eastern Bloc to the bone, tempered only by Skellige, an island nation of Viking Scotsmen with accents more in pitch with Leprechauns. When the skies of Toussaint fill the screen, all eyes are assaulted with a wash of cyan swimming in turquoise; moments may pass before it becomes apparent that the grass is greener than before and that the flowers are filled with colour enough to burst. 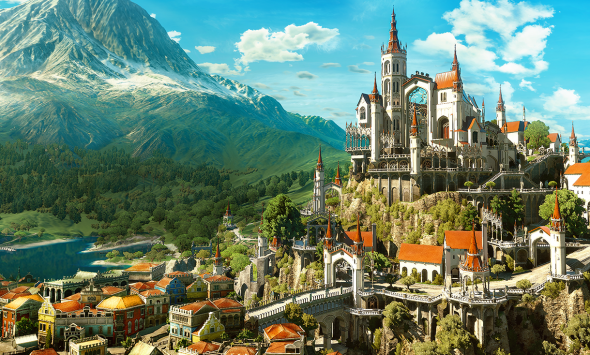 Toussaint is a postcard land, a fantastical holiday getaway where a curse will sooner turn one into a songbird than a toad, impossible to properly place but very likely fusing Holland with France with maybe a side order of Spain. Accents are even harder to pin down and would probably do great disservice to the quality of the writing were this not a fantasy land, strange even to a witcher. Against the backdrop of The Wild Hunt and the previous DLC, it almost appears as a play, borders on larping – it is actually commented during one of the plentiful side-quests that the knights in the land are apt at tourneys, not so much actual life-or-death combat – a land drunk on its own natural riches (grapes very much among them) and beauty.

And for all this, it still feels lived in. The main city centre is an upward climb to a storybook-worthy castle that might appear to be floating in the sky if viewed from just the right angle, a slow gradient of homes; those of peasants to those of nobles, always splashed with colour and never lacking in character. As a land, it feels soft after previous adventures, and it… kind of is. At least to begin with.

This isn’t a bad thing. After the previous expansion – Hearts of Stone – almost seemed to revel in player suffering at the hands of a giant frog in a tight space that made sure Geralt’s stagger animation was an additional problematic layer in an early boss fight that even a Souls game might consider mean, the short series of larger fights at the front end of Blood and Wine is more forgiving of the recommended character level, and most give Geralt some space to actually move.

This is appropriate enough. In this land hung up on chivalry and slaying beasts so as to impress a maiden rather than because it ate a neighbour’s baby, Geralt is the probably hardest man around. He’s certainly the gruffest. It’s also a rich world, meticulously crafted, and CD Projekt wants players to discover this. The contract that kicks off the adventure swiftly mutates from beast hunt to supernatural political mystery and bestows Geralt with his own land as an upfront reward, and if tending to that initially seems too costly, then fear not – although experience is generously distributed, the recommended levels for core story missions rocket up at a rate that practically demands that side-quests be pursued, and witchers will take coin for their services.

They’d be advised to seek the experience these quests bring, too, and to not grow soft on aged wine and emerald grass. Blood and Wine gets harder, and it’s worth thinking ahead about what might be useful (vampire oil, perhaps?), as well as honing those combat chops. Even then, anger at how the patches seem to fix everything but post-mortem loading times may well leave some scratches in the sheen before it’s all done and dusted. 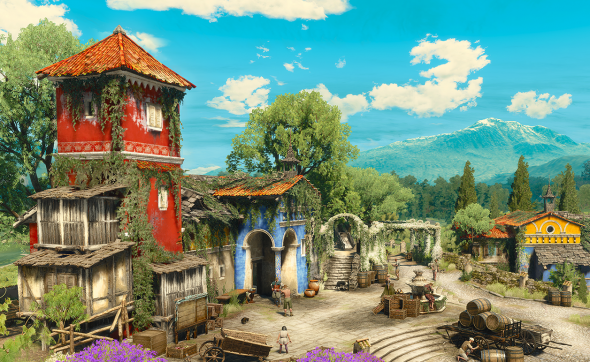 Toussaint in all its glory…

The core story, although laced with romantic trimmings, does move in darker directions – it certainly benefits from the ability of crypts and caves to obscure those painterly skies when mood lighting is required, to say nothing of the sinister romanticism of a beautiful night sky – but side-quests occasionally allow for hair to be let down, often poking fun at the first-world problems of this often poncy, art-loving culture. Nudity comes up more than once, and Blood and Wine isn’t shy of offering a quest centred around a pair of testicles.

Of course, it’s an intriguing tale well-told. Of course it is. This is the offspring of the game that gave us Bloody Baron and put the moral cause and effect systems in other modern RPGs to absolute shame. What really stands out here, though, much as it always did, is that yes, this is good writing by standards outside of the medium, but it really is exceptional writing within it. CD Projekt can’t control everything that players see or do, but its writers and artists can seed the world.

Toussaint is as deep as it is wide, and it’s a world with a memory. This isn’t just a narrative string; the effort that has gone into inessential quests remains second to none, settlements have character, different NPCs may react to Geralt in different ways, and those reactions can be influenced by his previous actions. It all raises the writing from merely telling a story to grounding said story in a thoroughly realised reality. Honestly, this is a far more impressive accomplishment, especially if you’re going to insist on the open world.

Wine good enough even for a craft beer guy

Blood and Wine is indeed an impressive accomplishment. At first many of the changes may seem merely cosmetic, not all of them (it seems to run more consistently than I recalled it doing) necessarily divorced from Wild Hunt, but it soon flowers into actual world-building that allows a kind of playfulness, sometimes even a surreal edge, that would grind against the fiction in the main game.

It’s a new world, and it’s aptly large – if perhaps not quite as large as boasting may have claimed – but more importantly, it feels crafted rather than generated, and it sparkles with its own sense of culture and internal consistency. Are the quests any good? Of course they bloody are, core, side-quest and witcher contracts alike. Is there a reason to turn your nose up at this if you’ve already played the previous content? Only if you’re allergic to turquoise.