Sound. So often sidelined when reviewing games, yet it’s amazing how much difference it can make to an experience. Much of Arkham City’s atmosphere and wonder is owed to the fantastic score and exemplary sound design. Dead Space would be nothing without its eerie soundscapes, the Ishimura simply a dead ship without its creaking and groaning and breathing. Many of us are content to play our games on HDTVs which, on average, have fucking awful speakers. Tiny, tinny little cones jammed into our flatscreens, washing out our audio and filtering out all those gorgeous frequencies that the sound designers spent so long putting in.

You could buy an expensive soundbar or surround sound system. You could even hook up your console to your hi-fi system. Or you could spend much less and pick up one of Turtle Beach’s world-renowned headsets. Specifically engineered for gaming and designed to work as both headphones and headset, many of these prized peripherals come with a hefty price tag, making them unaffordable for most. Enter the Earforce X12 for Xbox 360 and PC. For the price of a new game you can experience surround sound, rich lows and shocking highs. I bought one and my days of listening to my games through my cheap TV’s speakers are gone.

While the specific technical specs of the headset escape me (Turtle Beach aren’t about to put their secrets all over the box) the X12 does have a surprising amount of high-end tech built into its attractive chassis.

The ultra-comfy cans are fitted with massive 50mm speakers and perform fantastically no matter what game you’re playing. The mic is on a flexible metal arm and is very easy to manipulate whether you’re finding your optimum position or just getting it out of the way. In between the headset and the plugs is a neat little amp unit with a bunch of dials as well as the necessary ‘Mic Mute’ switch. 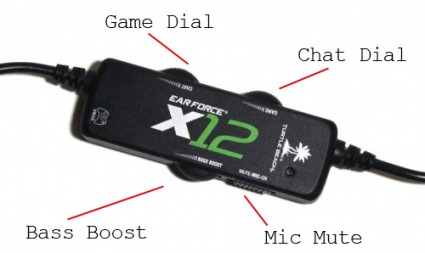 Full control at your fingertips

The ‘Game’ and ‘Chat’ dials allow you to independently mix game audio and chat audio to a comfortable balance. Gone are the days of that one arsehole on CoD shouting over everyone and ruining the game. If your friend has his mic particularly close to his mouth or the game is especially loud, the dials allow for complete control over the volume levels. Even when playing alone, the Game dial lets you adjust the volume to a comfortable level for the game you’re playing.

‘Bass Boost’ is a weird one and doesn’t work exactly how you’d expect. Turned all the way down it seems to drain the bass frequencies out completely, making the game sound tinny and empty. Set about halfway usually equalises it, allowing you to experience the rumbling lows that really make the difference and give the sound real weight. Dialling it up all the way, in my experience, makes even the lightest footstep sound like an atom bomb. I reckon it’s best to mess about with this one and find a level you like.

Connecting the beast is a little more complicated than it may appear. At the end of the cable are two 2.5mm jacks, one for the audio and one for the mic. Common for PC headsets, it means you have to connect another (included) cable to the audio one to turn it into red and white stereo plugs. These can then be connected a number of ways; routing your Xbox’s red and white audio through them if you’re still connecting through SCART or RGB, slotting them into your TV’s audio out jacks or using the sometimes-comes-with-your-console Audio Adapter Cable.

It’s worth noting that you’ll likely need this cable if you connect your Xbox through HDMI as it’s the only way to do it really. There’s also a USB plug you’ll need to hook up to your console to power the headset. If you want to use the headset feature you then need to connect yet another little cable between the amp and your controller.

While this may sound like a mess of wires, it’s really not. The X12 is well-designed with many set-ups in mind. The cable is enormous and will reach around or across almost any size room, no matter how far you sit away from your telly. The amp is situated just down the cable from the headset, meaning it’s always within reach. Once you have the unit hooked up the only thing trailing is the cable itself, which considering how thin it is isn’t really much inconvenience. The use of the 2.5mm jacks means you can very easily use the X12 with your PC or Mac, making it perfect for those looking for a headset to straddle both the console and desktop mediums.

The way it’s connected does lead to an odd thing though. Because the unit is taking the audio direct from the console you’ll still hear the game through your TV unless you turn it down, and the Game control on the amp unit is your only volume control. While this is great if you have friends over who want to watch you play, it could get annoying having to turn your telly down every time as most TVs now have an obtrusive Mute graphic on the screen whenever you mute it! 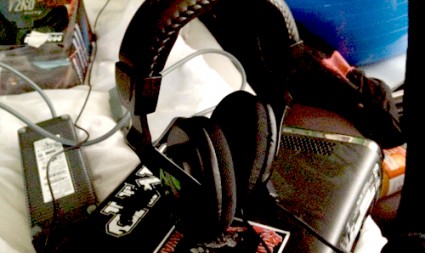 It's a beautiful thing, although my less-than-stellar photography does it little justice...

Down to the nitty-gritty: it sounds fantastic. While you wouldn’t expect anything less from a headset, the X12 brings your games to life. The sounds of the game world envelop you, with any surround sound mixing done by the designers fully represented. The clarity the unit can put out is startling at first. You’ll notice tiny sounds, directional or otherwise, that were missing before. Every hit, shot and footstep is crystal clear and it takes a little while to get used to the stunning vibrance of the audio. You can hear enemies rooms away, talking and shuffling and getting ready to attack. I can imagine it would be invaluable in stealth-based games and certainly in multiplayer FPS’s like CoD and Halo.

There’s a feeling of genuine freshness every time you try a new game with it. You can really appreciate the work sound designers do as you can hear every frequency, every background noise and every layer of the soundscape presented in glorious detail. Music booms and fills your head, the sounds of battle rattle around your skull and conversations and dialogue have cinema-style clarity and depth. It really is a wonderful feeling and quickly becomes the only way to play.

Once the little mic cable is connected you get access to crystal clear Xbox LIVE chat, fully mixable with the game audio. The mic is fantastic quality and friends have told me it sounds like a Skype conversation; miles away from the usually more radio-like 360 headset mic. You also get a neat monitor feature, which negates the increase in loudness of your voice in your head if you catch my drift.

A problem when using in-ear headphones and other closed cans, the X12 uses the noise cancellation features to equalise your voice in your ears, making sure the sound of your dulcet tones echoing in your skull doesn’t overpower your game. Hearing others is also brilliant, although the quality of their headsets is a factor and the X12 unfortunately can’t compensate for others’ cheap mics!

Verdict
I originally bought this headset so I could play my games as they were meant to be played (by that I mean LOUD) late into the night without keeping my folks awake. Now I use it all the time, even in the middle of the day. I never realised how fucking horrible my TV speakers were until I experienced the joys of the X12.

While running the risk of sounding like an advert, I hope I’ve convinced you to take the first step to audio heaven and grab one of these while they last. For a snip under forty quid you get brilliant, personal game audio with matchless clarity and a great level of control. If you’re looking for a cost-effective way to enhance your favourite hobby, the Turtle Beach Earforce X12 just might be the answer.