When Ultra Street Fighter IV was first announced earlier in the year, reactions appeared to fall into two opposing groups: Those that felt Capcom were really milking it, and those that couldn’t wait for more characters, balance tweaks and system evolutions.

Me? I was – and still am – in the latter group. Street Fighter IV first hit five years ago as astonishing as that may seem and, as a regular player of fighting games, I’m extremely happy that they’re still supporting my favourite fighter with considerable DLC upgrades and offering me new ways to play.

With this being the fourth major edition in Street Fighter IV’s lifespan, I won’t patronise you by going too deep into the basics: It’s still a 2D one-on-one fighter, and by using kicks and punches, plus a myriad of combos and special moves, you must deplete your opponent’s energy bar before they deplete yours.

The Focus Attack, for example, now has a ‘Red’ variant. For those that aren’t aware, the original Focus Attack is a chargeable move that allows the user to take one hit while winding up, and if they land the resulting attack before being hit again, it will cause their opponent to ‘crumple’, leaving them momentarily open to punishment.

The Red Focus Attack, then, absorbs multiple hits and deals 50% more damage than a regular Focus attack, but it requires two bars of precious Super Gauge. With that, its application is still fairly situational, but it can be used as a good defence against a flurry of attacks and subsequently set you up for a nice counter. 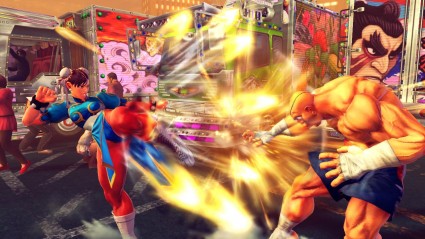 Sagat too weak for you? Then you can pick his overpowered incarnation from the original Street Fighter IV…

Previously, we were limited to taking only one Ultra Combo (the big, flashy moves that use the Revenge Gauge) into a fight, whereas in Ultra Street Fighter IV, you now have the option to have both available at the cost of lesser damage. For someone like me who likes to change their game-plan on the fly, this is invaluable, meaning that I can be fully equipped for all scenarios. The downside to taking this option, obviously, is that without the same level of raw power, landing an Ultra isn’t quite the game changer it used to be. It is another satisfying, strategic layer to consider, however.

Delayed standing is another interesting addition to the formula. As has been the case since SFIV, if you hit two buttons at the exact moment your character is knocked down, they will jump back up quickly and allow you to respond immediately. Now, in hitting two buttons just before you land, your fighter will stay down for longer (exactly 11 frames), meaning that your opposite number could mistime their follow up attack. This provides something of a wakeup call for seasoned players, as they have to adjust their tried, tested and most heavily practised rhythms to counter this. In this sense, it’s an effective way to keep everybody on their toes regardless of their skill level.

For many, the five new additions to the roster will be the highlight of the package. Hugo, Poison, Elena and Rolento all make relatively painless transitions across from their appearances in Street Fighter x Tekken, while Cammy clone Decapre rounds up the quintet, not playing at all in the way that we assumed when she was first announced. Amazingly, it seems that not one of them upsets the already delicate balance, thanks largely to subtle fine-tuning made to all the existing fighters.

I’ve not been able to play well enough as either Decapre or Hugo to offer a comprehensive critique of their strengths and weaknesses. Hugo is a slow, hulking monstrosity that takes up half the screen, and thus requires the kind of patient, up close game I tend to shy away from. With Decapre… well, I’ve never been the biggest fan of charge-characters, so it’s probably no surprise when I say I haven’t managed to find my rhythm with her. I have come up against her more than a few times online, and in capable hands she seems pretty powerful, so if you’re more comfortable than me playing that way then she seems a decent option.

Poison, Elena and Rolento are instantly more in line with the sort of fluidity I look for. Rolento has a quick speed and impressive manoeuvrability, Poison is moderately paced and feels a bit of an all-rounder, while Elena’s airy high jumps and trademark kicks means she has an awesome reach, and I really like her specials.

That said, as the perennial Ryu player, I’ve not felt compelled to step out of my comfort zone and take any of the new fighters into the online arena. That’s a reflection of my own limitations as a player, however, not on their overall quality or potential. 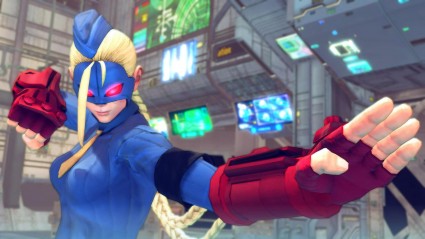 I am utterly terrible with Decapre, but she’s seemed powerful in the times I’ve faced her.

Another sweet feature, particularly for those who have followed Street Fighter IV at every upgrade since its original release, is the ability to select any version of a character. Prefer Sagat from the vanilla Street Fighter IV before he was nerfed in Super Street Fighter IV? Well, you can pick that version. Personally, I’m generally more than happy to play with the newest and tweaked iterations as they tend to be better balanced, but this is a brilliant option for those who enjoy Street Fighter on a deeper, technical level.

Elsewhere, all prior modes and features are still present, but there are many extras. Six additional de-Tekken-ed stages are brought over from Street Fighter X Tekken, for example, such as the popular Jurassic Era Research Facility and the Blast Furnace, and they all slot in perfectly. There are Bonus Round themed additions in the Challenge mode, a new Elimination game-type that sees Street Fighter do its best King of Fighters impression, while Online Training – a popular feature again pulled from Street Fighter X Tekken – lets you enter the dojo to practice against an actual live opponent.

Lastly, you can now upload any replays of your fights directly to YouTube from your Fight Log, which is a great way to share those intense showdowns and chart your improvement over a period of time. I’ve been using it over the course of the review, and you can follow that progress on my personal YouTube channel right here.

I totally understand that from the outside looking in, this might not look like a huge evolution on what’s come before – outside of the new characters, of course.  Yet, however slight its technical adjustments may seem, for such a high-speed, high-impact, competitive game, even the minutest alteration can have massive ramifications on how it feels and flows. With its new systems and tweaks, Ultra Street Fighter IV actually represents the bravest Capcom have been out of all four SFIV instalments and it’s a risk that absolutely pays off.

Plus, with an already strong set of features now bolstered with more – new fighters, stages and game modes – this is also one of the most comprehensive fighting game packages money can buy. Whether you’re a veteran looking to shake up your experience and be challenged, or you’re a newcomer looking for the perfect jumping-in point, you’ll find what you’re looking for here.